Our new Originators series explores specific, underserved scenes through mixes of representative tracks and interviews with prominent artists, as conducted by Zak “SPF666” DesFleurs. The intent is to provide desperately needed historical context for these genres in the age of the Internet, a time when cultural objects are uprooted from their scenes and reworked, repurposed and reappropriated beyond recognition.

The first in our series is DJ Relentless / Jade Elektra (neé Alphonso King Jr), introducing us to the cunty voice of ballroom, bitch tracks. Relentless is best known for his Relentlessly Cunty mixes: a multi-volume series that serves as a near-comprehensive survey of bitch tracks.

His contribution is primarily an archival one: the Relentlessly Cunty mixes served as an introduction to many (myself included) to a specific element of ballroom culture that lives on in the endless Soundcloud reworkings of classics in vogue’s most recent rise in popularity.

When did you start DJing? Was it always under the DJ Relentless Moniker?

I guess it all started in 1980 when my Uncle Herbert King moved to Tampa from Las Vegas. He was blind and needed an assistant to help him at his new job at WMNF 88.5. We did a Jazz/R&B show from 1 to 4 PM on Mondays. I had always loved music and had collected records since the age of 5, but this began my love affair with programming. He always told me to “only play what you believe in and love”. I didn’t get the DJ name “Relentless” until 1996 while I was spinning and VJing for The Works and The Break in Manhattan after playing in New York City for the past 4 years. Until then I just used my real name, Alphonso King Jr.

Your uncle gave some pretty solid advice when it comes to djing (and production for that matter). So how did you initially get into the ballroom scene in the first place? What was your house?

My first residency was at Sally’s II (as featured in Paris Is Burning). Ironically, the year before I moved to New York, I watched Paris Is Burning and dreamed of being at a ball. So, when I moved in with The Electrifying Grace (who was the downstairs neighbor to Paris Dupree), I was thrilled. Then Grace got me an audition for Sally’s, right around the time that Dorian Corey and Angie Xtravaganza had weekly shows there, and Willi Ninja, Octavia St. Laurent and Pepper Labeija were regulars.

”All I ever wanted was to be a part of the NYC club scene.”

Grace had many complications with HIV and became really sick and Dorian talked me into doing drag again. Jade Elektra was born at Grace’s benefit in 1992. Pepper saw me that night and pulled me aside. She said that I reminded her of herself when she was younger. Then she inducted me into the House of Labeija. I walked a few balls and even won Butch Queen first time in drag at a ball — only because no one in New York had seen or known that I had done drag before.

Sally’s! My god, between there and the Anvil, I’ve read some amazing stories. Let’s get to your incredible Relentlessly Cunty mixes. These were my introduction to bitch tracks, and most classic ballroom beats for that matter. What encouraged you to put out the series? How were they received?

The Relentlessly Cunty series came about in 2000 when the owner of Rebel Rebel Records approached me to find out what bitch tracks were so he could order them for his store. Plenty of the tracks I was playing were on small independent labels or were straight-up bootlegs. So, the first volume was put together to educate him on what the sound and genre was. He started playing them in the store and people started asking where they could buy the mixes. So, he ordered 10 copies. It kept selling and so it turned into five volumes. All I ever wanted was to be a part of the NYC club scene. I never dreamed that I would play an important part in preserving some of its historical subculture of underground house.

To my surprise, every volume was uploaded to Napster — and later to Limewire — and since their release, these compilations have been played as far as Australia. And even though there are plenty of fake DJs out there pretending that they are the creators of this series, I am sure anyone who has met me or bought one of my CDs knows who I am and what I have created. So, I have decided that I should work on volumes 6 through 10. Relentlessly Cunty is a movement and shall continue to document these important recordings.

It’s such an incredible work in terms of archiving; from what I’ve heard most of these tracks were difficult to hunt down and some existed on smaller labels with limited copies. You then went on to make a few bitch tracks yourself as Jade Elektra; what encouraged you to do that?

I remember the first time I heard Roxy’s ‘Get Huh’ — I was mesmerized. That voice! It was bitchy and it cut through the music, it made me want to try it. Kevin Aviance has a very unique tone in his voice, while Franklin Fuentes’ voice basically defined what a New York bitch track was supposed to sound like. I think the dry sarcasm of my [Jade Elektra] delivery gave me a signature sound. I often say that my voice sounds like a cross between Tony The Tiger and Tim Curry from Rocky Horror. In fact, I believe that most people who like my Jade Elektra tracks don’t realize that my early tracks were making fun of the ballroom scene. 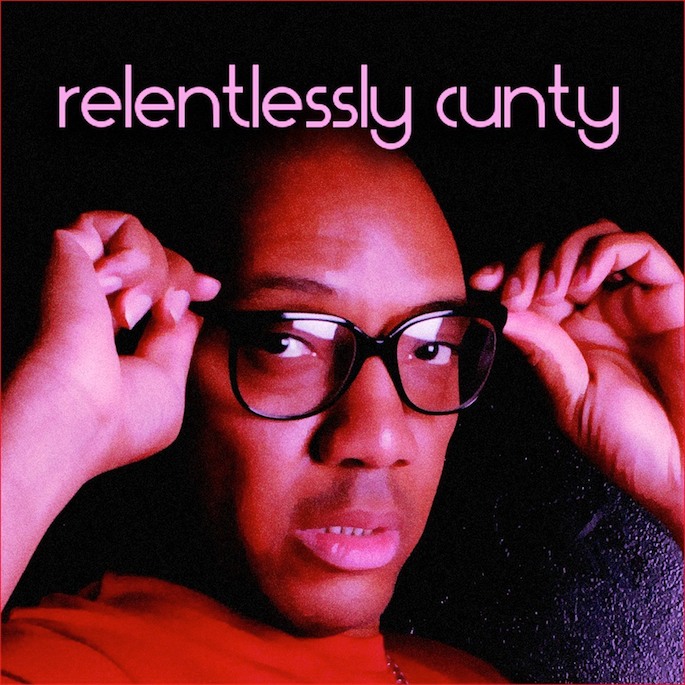 Oh, absolutely. ‘Why Are You Gaggin?’ has some of the bitchiest reads on mainstream ball culture at that time. Tell us more about Jade Elektra and her relationship to Relentless.

It’s funny. I guess as both personas developed they both inspired my taste in music and what I wanted to do with music. When I started doing bitch tracks, I just wanted to fit in. Jade Elektra came up as Kevin Aviance and Franklin Fuentes were both being featured by Jerel Black. So, my good friend, Calvin Roberts, and I teamed up to produce ‘Why Are You Gaggin’?’ which was a complete dig at Kevin and Franklin. They were both kinda dismissive of me as a DJ at J’s Hangout. So, I made the track to have to play on my gigs. I never actually thought it would be signed.

The other thing that was interesting to me was that in the mid ‘90s, the circuit DJs and the Chelsea boys that I worked around were dismissive of my tracks and my spinning. But fortunately, I had an audience of people who were not being served. And now those same DJs and boys now are trying to copy and rehash my tracks like ‘Bitch You Look Fierce’ and ‘Why Are You Gaggin’?’. I won’t mention the two DJ/Producers who recently tried it because I don’t want to give them any juice, but let’s just say their versions of my songs don’t come close to the original production that Calvin Roberts did back in the ‘90s.

When I wrote the words for those tracks they meant something to me, which I think is why a lot of people connected with them. Having someone else say those words or having an electronic voice repeat my catch phrases instead of using the original acapellas is just tired. So, I would say Jade has definitely help shape who I am as a DJ.

”I feel blessed to have been in the presence of the founders and icons of ballroom.”

I could absolutely see how recording and performing as Jade led to a different approach to playing and mixing those tunes, much like producing usually changes a DJ’s perspective on the music they play significantly. Were other DJs playing a lot of bitch tracks at the time?

You know, back then I was playing almost five nights a week. I didn’t get out much to hear other DJs, but I do know that Ken Terry and Vjuan Allure were spinning bitch tracks and cunty beats. But I do remember the rise of hip-hop in the urban gay bars and clubs in New York City leading to a general decline in vogue’s presence, like when The Warehouse in the Bronx proclaimed in 2001 that they were no longer gonna play “faggot music” on the main floor. They booked me that year and had me spin upstairs in a room that had no door, and the main floor’s music was constantly drowning out whatever I was playing. I was furious and swore never to spin there again. I was the Sunday night resident with Harmonica Sunbeam at Escuelita, and even though the owner hated what he called “vogue music,” I would play it anyway.

There weren’t spaces for the ballroom kids in the clubs, even Sally’s II closed its ballroom in 1996. When I became the first black DJ at The Monster, the owner there actually put up signs that said “NO FALLING ON THE FLOOR AND NO VOGUEING”. I think between Ken Terry and I, we were the main ones who were programing the beats for the kids.

It’s interesting to imagine ballroom culture, a scene representing some of the most dispossessed individuals at that time, emerging from complete adversity and ascending to mainstream attention via Paris is Burning or Madonna for just a short while before sinking out of sight of the public’s eye in the mid-2000s. Recently, there’s been an upswing in attention paid to ballroom as a genre in dance music, from Azealia Banks to ‘Ha’ crashes in the Beatport Top 100. What are your feelings on the state of the ball/vogue culture today?

Everything has to evolve. The functions I attended back in the ‘90s were long and drawn out, but there was a sense of community about it. Unfortunately, I don’t feel that when I go to a ball now. The tracks are getting faster and faster and the battles are vicious. I can remember when ‘Trance Europe Express’ by Kraftwerk was a ballroom classic and used for categories! That would never happen today. And I mean, the girls would get vicious after a heated exchange, sure, but the kids today go in with too much entitlement and attitude. There’s no earning respect — it’s just demanded. It’s just not the same.

Worst of all, the respect for the people who came before them is not there or not genuine. When I met Dorian Corey, I was in awe of the history that she represented. I tell kids today that I worked with and performed with these legends from Paris Is Burning and they shrug and walk away. I feel blessed to have been in the presence of the founders and icons of ballroom; it was those meetings and friendships shaped me as a DJ and a performer!

And as far as ballroom hitting mainstream, I don’t know if it’s worth it. Madonna doing ‘Vogue’ or The Scissor Sisters doing ‘Let’s Have A Kiki’ introduced many to our lingo and ideas, but I’m not sure if it was credited to the right people. Appropriation is definitely the word that comes to mind.