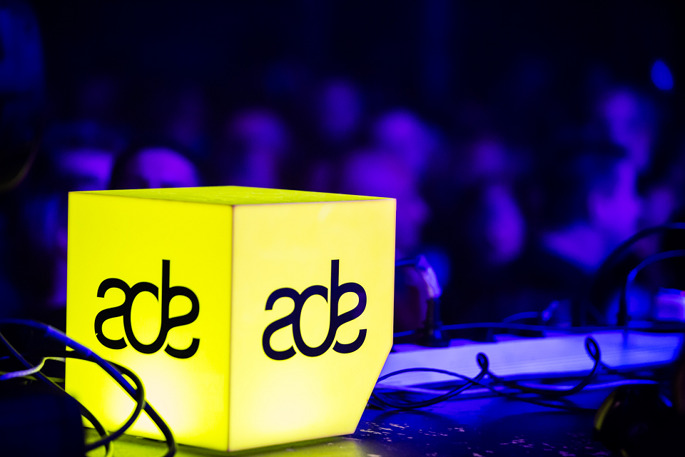 I keep having to check my privilege.

You can hear quite a lot of moaning at ADE – about EDM bellends, about flashy Yanks and Italians, about endless pointless meetings, about hangovers and sleep deprivation – and I feel like moaning too sometimes. This year I’ve generally been under the weather for one reason or another, not enough to stop me going but enough to sap my energy levels severely, and stop me getting fully stuck in.

Every time I feel a whinge rising, though, I quickly but forcibly remind myself that I am in a very, very fortunate position. This year, my second, I am here on ADE’s ticket, and beyond a bit of mild A&R schmoozing the only thing actually required of me is to chair three panels in the daytime conference bit of the Event. And actually a lot of those people complaining have some good reason to: just looking at the schedules of some industry people I speak to, let alone try and set up and conduct as many meetings as they have to sit through all day every day, is enough to bring me out in hives.

So, duly reminded of how lucky I am, I take a relaxed approach to things. While last year I looked from the inside, spent a lot of time in big clubs, and endeavoured to experience at least 658 varieties of house music in full participant mode, this time round I skirt around the fringes of things, gently networking and absorbing events in much more of an observer capacity. Which provides the chance to see exactly what a barmy achievement ADE really is.

From the hub of the conference venues themselves, which 7,000 or so fully paid-up delegates have turned into ants’ nests of seething and inscrutable activity, it fans out through various buildings taken over by technology and media companies and turned into cultural playgrounds, through all sorts of record label buffets and barbecues, and into the entire club infrastructure of a city which is in any case dedicated to pleasure and leisure. 300,000 clubbers pass through ADE: alright, not quite the Berlin Love Parade at its peak, but that’s still almost two full Glastonburies dropped into a major city for the best part of a week.

Yet for all that, the meetings of the conference-goers aside, it’s not that frenetic. Amsterdam’s size and pedestrian/cyclist-friendly layout leads to ambling being the default mode – it’s just nice to move slowly and take it all in. Indeed, after over-indulging in coffee shops even the roughest Brits take on the demeanour of slowly lumbering bears rather than the tightly-wound Staffies they’d resemble at home. Speaking to locals, I discover a favourite pastime is to clock way ahead which of these ursine tourists are about to lurch into the road or cycle path but wait until the last minute to ring your bicycle bell so as to send them leaping back in disarray.

The clubs are civilised too, with generally cheap drinks, indoor and outdoor smoking areas and, of course, lots of people on high-quality, certified MDMA. None of this is to deny the obvious dark sides of Amsterdam – they’re there, and fairly obvious, as much as in any other conurbation. But it does go a long way to explaining the uniqueness of ADE and how it has managed to continually expand in its 19 years of existence. You just couldn’t do something on this scale in London, for example: it would be utter chaos.

I do actually manage to do some raving, mind. I start my week with the R&S party, specifically to see the live set by Appleblim and Second Story aka Al Tourettes in their ALSO guise – which is absolutely tremendous: dubwise, luxurious, and very, very live (to the point where it teeters on the edge of falling apart a few times, only for them to pull it back together) electro and long-dark-tunnel techno, which is followed by an impressively hammering DJ set from Lone.

There’s something going on here. The people performing and the people I run into in the crowd mix of younger post-dubsteppers and people of my generation of 90s electronica heads. I see one of the guys from Leisure System, notice there’s an interesting overlap between R&S’s roster and Houndstooth’s, and suddenly start tracing connections through Bristol, Glasgow and Berlin and through all kinds of turn-of-the-millennium warehouse electro acts/clubs, and realising that there’s a kind of consolidation going on. Where many of the “bass music” generation have reverted to the safety of the four-to-the-floor through straightforward house and techno, here is a hub for people tapping into the history of IDM and electro to maintain things as a bit more rhythmically varied. 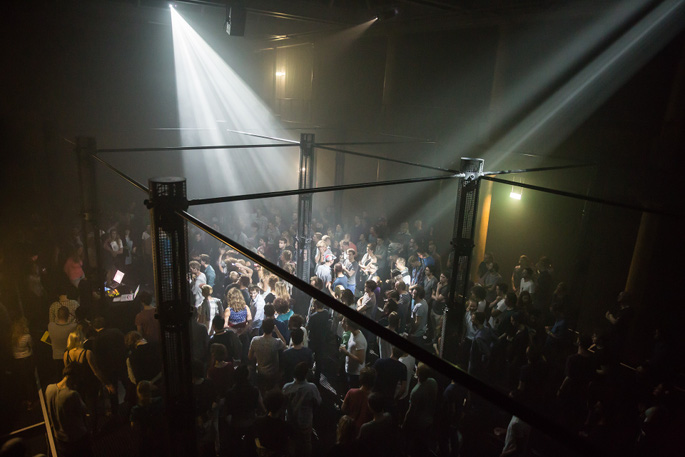 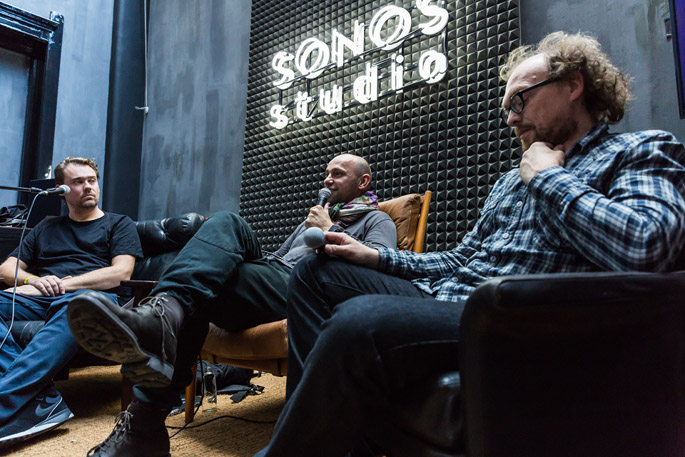 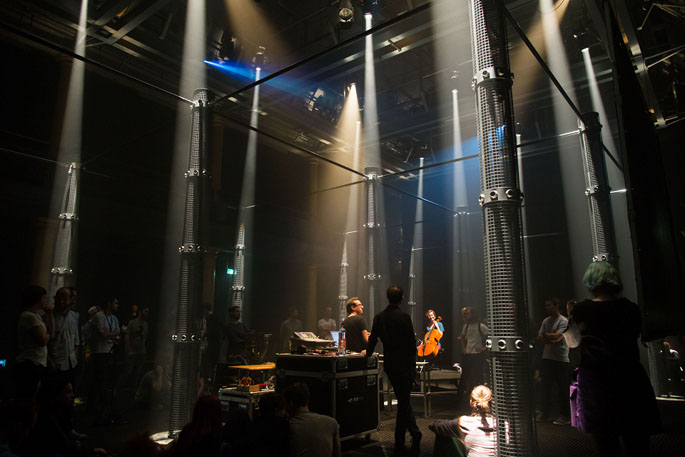 It’s a half-formed thought, really – but it’s reinforced once again on my one other big clubbing excursion a couple of nights later to the rather large Warp x LuckyMe party. There, everyone is partying like Aquacrunk is still a word, with things like ‘Get Ur Freak On’ and the James Blake remix of Untold leaping out of the flow of rap beats and other electronics as if to remind you that this very Scottish style of DJing is not bound by the anxiety of newness, yet it all still feels young and relevant, and again starts off train of thoughts about the one-degree-of-separation closeness to the R&S and related people I’d seen previously. Sure, yes, these are just outposts in a vast sea of house/techno, but in comparison to my house-tastic ADE 2013 the contrast is huge, and it’s just nice to be reminded that there is something going on that’s strong and deep-rooted enough to withstand micro-trend wind-changes and retain some kind of commercial viability.

Commercial viability is obviously an anxious topic for everyone bar the EDM bellends, and indeed on one panel discussion I watch several reasonably successful and credible producers all say flat out they don’t even ask for payment from labels for their records – just seeing it as part of the promo for their DJ career, where they actually earn a living. There’s plenty of discussion of rising vinyl sales and increasingly popular streaming models around the conference, but there’s no question everyone – labels, distributors, media outlets, everyone – is on a wing and a prayer right now, nobody really knows what’s going on, and it requires quite a serious degree of bloody-minded faith to even be in the industry.

The people who seem to be doing alright are the tech folk. If you want to see a bit of good old fashioned music industry largesse, combined with genuinely interesting music and engaged discussion, the place to be outside the conference seems to be the Sonos Studios. The speaker makers have taken over a whole 19th century building in the red light district, and kitted it out with all kinds of attractions: talks, a free hairdresser, free beer and all sorts. This is clearly quite a networking hub and in the evening its rather decadent looking parties are heavily oversubscribed.

Slightly more studious in atmosphere is the Ableton building: a bigger, more spacious old theatre building full – of course – with laptops and music kit, where workshops and demos go on all day. Less a place to network, although that’s going on here to as everywhere, than somewhere to geek out at glorious length. And upstairs the nerd’s paradise is completed by the presence of the 4D Sound system, the mindblowing contraption that allows musicians and sound designers to place sounds anywhere within space.

There I see Max Cooper demoing it to an intense crowd of glitch-fiends one afternoon, and also have one of the musical experiences of the week when I catch Vladislav Delay playing a four-hour live set the next day. God knows what is up with him these days, but even more than his fantastic latest album, it sounds like someone discovering musical gear for the first time. He’s got a huge table full of kit, plus a mic’ed up eggwhisk, he keeps a massive bifter on the go pretty much the whole time, and he fills the darkened space with apocalyptic sounds that rattle round our heads, blow up into mountain sized explosions of reverb then zoom back down into clouds of pinprick crackles. People are lying on the floor, walking around inside the soundfield, having to leave the room to work out which way is up for a few seconds before diving back in for more. It’s fucking fantastic.

A bit of a shame, then, when I take a couple of friends along to the 4D system to see Stimming on my final night, and it’s essentially just a polite, rarefied tech house show with a few extra delicately-placed whizzy noises added in. Nothing wrong with that, mind – I enjoy it very much, I stay until 3am and even dance, it’s nice to get a bit of the old four-to-the-floor in having studiously avoided it all week, and actually in some of his ambient interludes he does start giving hints of what the 4D Sound is capable of. It actually makes me want to buy Stimming records. But, of course, I’ve spent the previous few hours frothing about how apocalyptically mind-blowing the Vladislav Delay show was, how the soundsystem is going to change music as much as the birth of amplification etc, so my mates can’t help but be underwhelmed.

Which is embarrassing. But hey ho, if that’s my biggest cultural upset of five days in a seething mass of electronic music activity, then once again I can hardly complain. Stumbling back through the night, I again feel very, very lucky to be involved with this vast and ridiculous creation. It’s a microcosm of club culture as a whole – of course, if you wanted, you could dive right in to the laser-zapping trance uberstar EDM bellendery of the mainstream of it, but as I discovered this year, that is completely avoidable, and I’ve been able to spend the whole time partying, gossipping, networking, debating and discovering lunatic technology and music with some deeply fun and interesting people who are part of an industry that somehow, for all its bloody-minded wing-and-a-prayer ricketiness is creatively thriving. So, hangover or no hangover, knackered or otherwise, that’s a very privileged place to be. 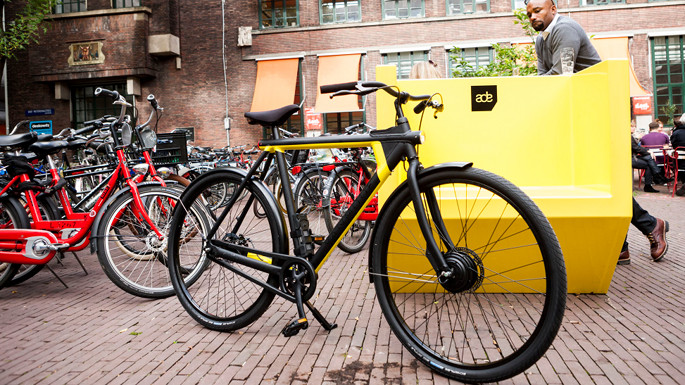