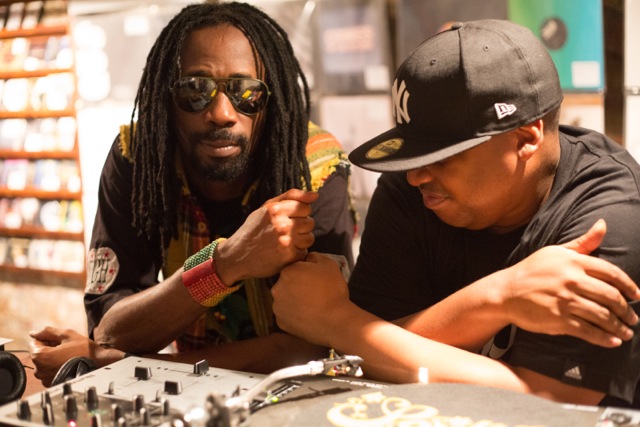 MC General Levy and DJ/producer Sticky have both made a huge impact on UK club culture’s history – and done so in a similar fashion.

Levy, a well-versed and award winning reggae artist, came to wider prominence by way of the junglist anthem ‘Incredible’ (the first to score a UK top 10), while Sticky created the most explicitly ragga-inspired UK garage song of the time, ‘Booo!’ featuring  Ms. Dynamite.

Over a decade later, both floor-fillers are still greeted with similar displays of gun-fingers as when they were first unleashed. After a number of subsequent hits between them, the two pioneers joined forces for the trap-influenced ‘Pull Up’. Marvin Sparks caught up with both to chat soundsystem culture, how UK club culture has changed, and that Mista Jam session.

How did the collaboration for ‘Pull Up’ come about?

Sticky: We met in Croatia at Outlook Festival last year even though we both live in London. We met on a transfer bus back to the airport. We had a very long journey going back, missed the plane then drove to Venice, which gave us an extra two hours to talk. We did ‘Pull Up’ a week after that.

You both brought a Jamaican dancehall inspiration to the UK sound. Is that something you found as a meeting point?

General Levy: Well, we’re both of Caribbean heritage – he’s a Jamaican, I’m Trinidadian. We both grew up with a lot of Jamaican influence. I come from Harlesden, north west London, and there was a lot of reggae music in my household. We grew up around Rastafari and the music, so the influence of our youths comes out through our adult music.

S: I come from south London. In the late ’80s/early ’90s, it was a reggae and dancehall community. I started out playing in house parties where you’d put the black bin bags on the window and play 7″ records for about 9 hours…

S: …so we just ended up being seasoned very early.

What were your early raving experiences, General Levy?

GL: I used to go to soundsystem dances like Saxon Sound, Sir Coxsone Sound, Java [Nuclear Sound], Tippatone, Unity Sound, Emotion Sound, Jah Shakka – all of these sounds that were big in the ’80s. I used to try and listen to every sound system possible when I was between the ages of 13 until I started recording at the age of 19 or 20. As a child, I was obsessed with cassettes from Jamaica – Killamanjaro, King Tubby’s, Black Scorpio – foundation stuff in my headphones, and going to English dancehalls like Coxsone and Saxon. Just trying to absorb as much of the culture as possible.

Who were the producers you respected coming up, Sticky?

S: My favourite producers from Jamaica were Steely & Clevie. They merged reggae, dancehall and hip hop, and they had the knowhow to push at least 40-50 acts in a short space of time. That influenced me and the artists over there to showcase the energy they had. It was the energy that me and my generation bought in to – jumping on stage, doing one hook, running off, hearing the mic feedback, running on again, kicking up their feet, place going mad, hysteria… That’s what I don’t really see much [in the UK] now. It’s more of a calm and controlled environment now. We were allowed to play music outside. We only have the festivals now and the one [Notting Hill] Carnival, whereas then it was every weekend. You’d have five or six flyers and had to pick which one to go to first, second and so on.

GL: Then they brought in licenses to sell alcohol. This is a problem that made it hard for people to hold a blues party. These were the things that made people step out, and then the club scene got more prominent because they had better security – you could buy drinks and it was a safer environment. A lot of DJs went from blues and soundsystems into the clubs. It made it more difficult for the man who wanted to play music but didn’t have any profile.

S: My son has to wait another year-and-a-half before he can go out, whereas I was already out by then.

S: That’s right. There was trouble even getting him a sweet sixteen birthday party because clubs weren’t allowing it. They think there’s gonna be trouble.

How do you think that’s shaped UK urban club culture? ‘Pull Up’ is more trap-influenced which, unlike UK garage and jungle, is more of a universal electronic music than something uniquely British.

GL: I personally think they’ve stripped away the originality from British urban music. I listen to trap music – Waka Flocka Flame, Gucci Mane, Jeezy, all the stuff. So I was shocked to hear UK youths doing trap, but then I thought to myself, “we used to do reggae back in the day and we weren’t from Jamaica. If we were doing that, maybe they should get a chance to do trap.” But it’s like we’ve reversed. We started off doing reggae, then into jungle, garage and grime, and now we’ve gone into trap. We should’ve progressed from grime into something new, or kept the grime.

S: Garage came from America anyway, then we adapted it, put a name to it – 2-step – then it was UK garage.

And then you obviously brought the more dancehall-influence into it before it turned into grime. I’d say both you and Wookie were instrumental in that.

GL: It’s mad. Everyday people talking about this 1Xtra video on Mista Jam’s show. When I went on the show and met with Dizzee Rascal, Lethal Bizzle and all these guys received me and Sticky with so much respect and honour, it was really an eye-opener for me. My cup was full of joy that day when the man dem showed me that love. It really let me know that England is on it, I’m acknowledged and all the work we put in over the years was worth it because it inspired them. To see JME and them man singing along to my songs like kids – they went back to being kids again…

That was the best thing about it. They smashed it before you, but they all went crazy when you came on. There weren’t any egos.

GL: It was wicked, man. When you have big artists like Dizzee Rascal saying, “Before I came into this business, I listened to them man there.” It was emotional.

S: It was so good and it came at such a good time. Now they have a category at the MOBOs. The public can see the amount of years us as people living in England have come, and the success we have got. And it’s easier now, but its still acknowledging the struggle that we had from the beginning to try and introduce it.

GL: And they’re not pretending that this all started with them – they’re saying, “We used to listen to them man before.” Certain kids will look at these guys like they’re gods, and if he’s saying who he listened to, the kids can follow how the story goes. You can go YouTube and watch hip hop documentaries from 1979, Kool Herc and all these guys, it’s like common knowledge. We want the English culture to have the same kind of legacy. People gonna say it’s man like Tippa Irie, Papa Levy, Smiley Culture, Macka B then General Levy, Sweetie Irie, Daddy Freddy, Top Cat, then Sticky with Tubby T, and this man and that man. Sticky could be like Prince Jammy, so it’s artists and producers. We have to keep the story going otherwise it’s going to get twisted up. That way if they want to emulate what we’ve done, it’ll be a true representation.

What are your hopes for this song?

S: Nothing really. We just made the song, put it out and the song ended up on BBC 1Xtra playlist. Anything else that happens is a bonus. We were just having fun with it and this happened.

GL: If we don’t make a record, we still make a living anyway, so there’s less pressure on us. When we do it, we can do it more as a laugh. There’s no deadline or commitment. We’re not here for ego or to make money and say “hi, haters.” It’s not about that. It’s about having fun, making a living, being free and bringing joy to people. Nothing makes me happier than doing what I do and seeing people smile from it.

And that’s what it would’ve been about for you in the beginning.

GL: Yeah, but there’s music and there’s the business. Business is too headache.

GL: Because we know the thing. Nothing is spooky anymore. We know money has to be spoken about.

Yeah, that’s the best thing, but I guess that comes from experience.

When’s the single out?

S: November 23 – the day after my birthday. A birthday present – working with General Levy is a blessing.