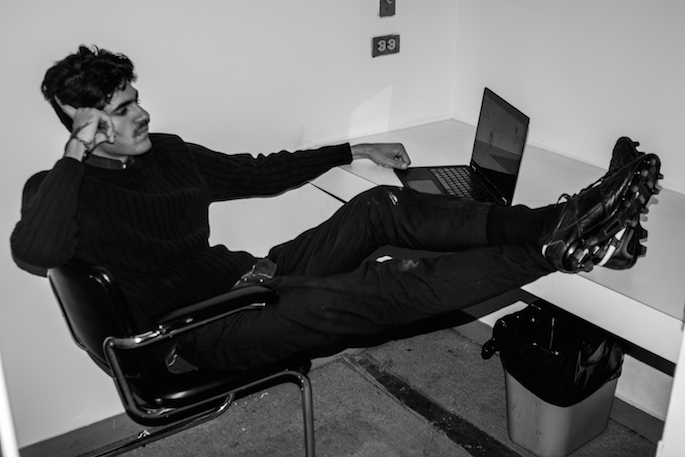 The young talent first caught our ear with his Rubies EP, which brought dreamy, Brainfeeder-esque beatcraft to Ghostly International. His sound is even more wide-ranging on A Constant Moth (his debut LP for the label), drawing from frazzled footwork, gentle ambience, sample-based hip-hop and suddenly-resurgent IDM.

“I wanted to approach things from an existentialist perspective,” he says of the experimental album’s creation. When beginning the project, Raja had left school and abandoned “the social conventions” he was used to, opting to “experience discipline and isolation simultaneously.” And while he was able to focus on the album, the change did come with unexpected sadness that left him “tragically, passionately scattered.”

Still, it allowed him to find new sources of inspiration. While usually more interested with the modern than the classical, he says the music of composers Iannis Xenakis and Olivier Messiaen “found” him, and the sonic paradoxes of their work — “trying to touch something so big with such small particles” — was eye-opening in his own process.

“It’s like when the painter doesn’t know when to step back from the painting.”

That process involved studying everything from cubism to African art, fusing his private studies with his music by using software and circuits to “granularize” their shared spirituality. Technically, that meant using a handful of computers, tape recorders, outboard synthesizers: “anything I could get my hands on, anything that would take me out of convention or stock sound” while still allowing him to find a middle ground between expectations and the experimental.

The album includes ‘Van Go’, a collaboration with Brainfeeder’s Jeremiah Jae, noting a “spiritual connection” between the two ever since they first connected years ago through Myspace. For their collaboration, he crafted a bit of “nervous techno” that people would perhaps not expect to hear Jae appear on. “He’s like the Jodorowsky of rap.”

The title of A Constant Moth aims to capture the feeling of being “simultaneously alone but surrounded by people in the subway,” as the isolation he opted for continued to shape the album. He admits he was a “little obsessed” with the mixing and mastering, among other things: “It’s like when the painter doesn’t know when to step back from the painting.”

“How can you put yourself in the context of the work when you’re constantly re-evaluating?” he wonders. “It’s such a maximalist album, hopefully it works.” Judge for yourself and listen to A Constant Moth below; it’s due out tomorrow via Ghostly International.