For Club Use Only: April’s best under-the-radar dance tracks 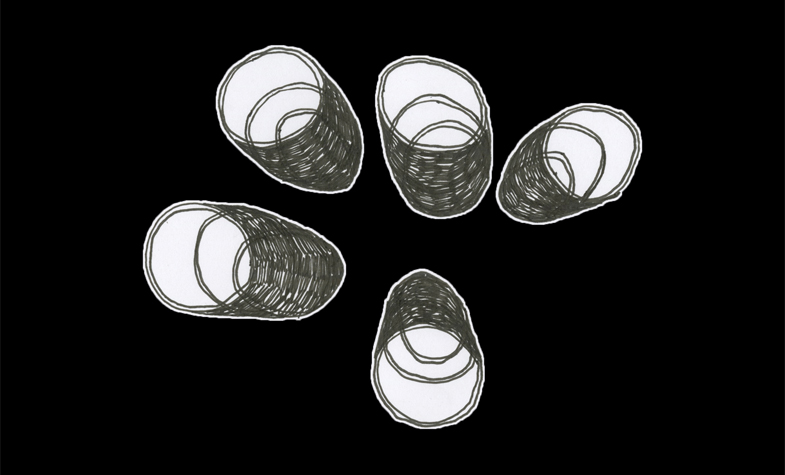 With dozens of mix series and online radio stations pushing on-the-cusp dance music these days, not to mention Rinse, NTS, Berlin Community Radio and other legitimate stations, a glut of quality mixes seem to be aired and uploaded every day of the week.

Whether you follow the heavy-hitter label shows on Rinse, more obscure concept shows on NTS, or mix series’ from Truants, Liminal Sounds or Mixpak, the prevalence of club music-driven shows is often difficult to avoid. Add to that pile the growing popularity of irregularly timed, web stream-style shows and it’s rare to log on without being crushed under a deluge of mixes from your favorite artists, DJs and curators.

If it sounds like I’m complaining, know that I spend most of my days running through each of the aforementioned stations and series with joy, but the glut does instill a certain antipathy in the format. One positive result of the broad proliferation of mix shows is that moment when you find that track that you’ve been hearing on everyone’s shows. With dubs flying this way and that, certain tracks seem to reach rarified air by way of their overwhelming popularity before they’re even released. This isn’t a new phenomenon by any means, but it has become a more engrossing task to try and follow a track from first listen through official premiere and on to release.

Many of April’s For Club Use Only tracks showed up on radio months ago before percolating through official mixes and appearing on releases from NAAFI, Golden Mist, Trax Couture and more. The path to release is as fluid as ever and the proliferation of the mix show has taken over some of the space previously occupied by official release schedules and PR campaigns. Granted, independent community radio hasn’t won out yet, but its getting harder and harder to watch this trend without buying into its ability to change the industry at large.

It’s no secret that Imaabs is one of our favorite producers, having featured in both our Heterotopia compilation and mix series, and his latest effort comes on Mexico City-based NAAFI, home of Smurphy, OMAAR, Paul Marmota, Lao and more. Distancia came at the tail end of April and has been on repeat since, its twisting polyrhythms proving to be a perfect entry into the hot months here in Los Angeles. Lead track ‘Voy’ exemplifies what Imaabs brings to the table: a skipping kuduro beat backed by a haunting melodic quotient that builds suspense for the track’s raw percussive thrust. It’s both challenging and immediately gratifying, a visceral quality few producers possess and even fewer grasp quite like Imaabs.

Widely respected as a legend and innovator in the Baltimore club world, it’s less well-known that DJ Technics is still active and churning out some of the best breakbeat-led club music anywhere. From the barrage of classics, new tracks and tools on his SoundCloud, from both himself and others like Dukeyman, DJ Class and DJ Samir, to the dozens of tracks for sale on his Bandcamp, Technics has been on an unparalleled grind, both in terms of archiving the history of Baltimore and making sure the much imitated sound doesn’t lose its originality or gritty spirit.

He’s also uploaded over 130 mixes, past and present, to Mixcloud, offering a valuable representation of the legend’s taste in club music, house, techno, rap, R&B and beyond. Admittedly, this treasure trove is a bit of a slog to work through at times, but it’s an invaluable piece of Baltimore history and Technics deserves far more praise for his contemporary production work and work as one of Baltimore’s chief archivists.

‘Track Queen’, one of Technics’ most recent uploads, is club music at its stripped down best. Its chintzy melody sits atop tumbling breakbeats and the clattering kick drums, and while it’s a well worn sound palette and sticks to a rhythmic formula, few do it better than Technics. Any aspiring producer or DJ purporting to respect Baltimore’s lineage should take meticulous notes.

T2’s ‘Heartbroken’ isn’t immediately apparent as Jersey club remix fodder, but in the hands of Kayy Drizz, one of the most talented young producers around, the garage classic has been revived into a stuttering, club-ready construction. It’s a simple formula, but Kayy Drizz separates herself from her peers through superior sound design and a knack for earworm melodic work. Jodie’s vocal work from the original is chopped into oblivion, riding the heart worn beat through the proverbial breakup and beyond.

With a collection of elegiac riddims ready-made for the saddest soundsystem ever, London producer Endgame has garnered a bit of a following for his bashment-inspired productions that fit the ethos of a haunted house more than they do a beachfront party. Alongside artists like Mobilegirl, Kablam, Drippin and the now-defunct BWWWOYS, Endgame has managed to instill foreboding – and sometimes downright terrifying – sonics into the club music fold, shifting the melodic side of dancehall, soca and grime into exciting new territory. If you’ve checked into Endgame’s Precious Metals show on NTS, you’ll likely have heard ‘Luxury Riddim’, and now the song is getting an official release via Lisbon’s Golden Mist label.

Having already released the excellent Energy Plaza EP (out now on Cocobass), joined the B.YRSLF DIVISION family and churned out a large collection of cheeky singles and one offs, it would be fair to assume that Margaret Antwood is one of the most hotly tipped producers in the dance music world. Unfortunately, her sparse take on electro, Miami bass and ghetto house hasn’t quite percolated outside of the reach of the two previously mentioned labels and, along with fellow B.YRSLF artists Trap Door and Tsvi, her work is well primed to blow anytime now.

Now, we’ve got a taste of her upcoming EP on B.YRSLF and the results are beyond expectation, especially on ‘Coincidence Pt. 1’, a track with the kind of unimpeachable sound design that should see it opening sets for many months. Plinky chords dominate the opening two thirds until a bout of thunder arrives and mechanical kicks, hydraulic noises and screams take over. It’s an unexpected development for Antwood as her previous work has been fairly easy going and dance-focused, but ‘Coincidence Pt. 1’ might just be what she needs to reach the chin-strokers.

Closing out the tape is ‘Disqualified’, an outlier of sorts on the EP in that it’s not a bare-bones club track, but a monumental close to the producer’s second official EP (after 2014’s Structures EP on Tight Knit). With an array of styles at his fingertips, it’s impossible to predict where GROVESTREET will go on his next release, but we do know it will bang.

With artists like Kowton and Pinch to look up to in his hometown of Bristol, it should come as no surprise that SHALT has mashed together icy techno and grime into a club-ready blend that’s both wildly original and deadly on the dancefloor. Across an EP on Clubwerks and several excellent edits, SHALT has amassed a number of percussive bombs that, from first hand experience, go down very well.

His latest rework is an edit of ‘Stab Variation’ from Tim Hecker’s 2013 album Virgins, a thunderstorm of a record that probably was ok to exist on its own, but SHALT has really imbued it with a fresh sense of propulsion. Similar to his edits of Lotic and Neana & Ra’s Al, the track really comes alive in its second half, as sneering square waves get tangled into the rhythmic mix before leaving just as quickly.

Sami Baha
‘I STILL GOT IT’

Is there anyone making more melodically enticing music than Sami Baha these days? Well, maybe this side of Murlo at least. The Turkish producer has been on an absolute roll as of late, and with no official release in sight, the hype keeps on growing. His Astral Plane mix is still in constant whip rotation and the dozen or so rap refixes within it are more than ready to become immediate classics. Plus Total Freedom is a fan and there isn’t really a better barometer in the club music sphere for future success than that.

‘I STILL GOT IT’ is an edit of the Usher/Migos track of the same name; it’s brief and satisfying, and fits right into the deconstructionist attitude championed by TF, Janus and a host of others. Last month’s edition of For Club Use Only also featured a tune from Sami, but I think it’s fair to say that we’re all waiting patiently for more material, and he certainly deserves the shine.

One of many standouts from Jubilee and Opening Ceremony’s Magic City compilation, Brooklyn’s Copout comes correct on ‘Get Down’, a track that should really already be a staple in every late-night club set. With tracks from Dreams, Helix and Nightwave alongside Copout’s effort, Magic City is a must download for anyone who loves the sparser, rowdier side of dance music and a tape that highlights Jubilee’s unmatched knowledge of Miami bass and other Southern dance forms.

Part of Ynfynyt Scroll’s deliciously over-the-top Spring Mixtape ’15, a tape of 11 self-described “larger-than-life Spring Break Essentials,” this reinvention of Konshens & J Capri’s ‘Pull Up To Mi Bumper’ hits all the right nostalgia buttons, and any chance to recall the original’s yellow vest clad visuals is appreciated.

Released via Track Meet, the label/crew Ynfynyt Scroll co-founded with DJ Shooknite in Dallas (YS now resides in New York), the tape takes an effervescent approach to bachata, dancehall, dembow, afrohouse, reggaeton and kuduro, replacing the menacing grind of tracks like ‘Pull Up To Mi Bumper’ with a trance-inspired twinkle. Few can instill a wide grin on my face better than Ynfynyt Scroll.

Page 11 of 11
Tags: The Astral PlaneFor Club Use Only