Plus, Green Day are out to prove that they haven’t aged in 20 years, while one of Jamaica’s most exciting new dancehall crews lands on Manchester’s Swing Ting label and David Lynch teams up with Chrysta Bell ahead of the Twin Peaks reboot.

Chris Kelly: Kuedo emulating film and TV soundtracks? Sign me up: who better to mix Badalamenti synths with syrupy Southern rap grooves? The only thing that doesn’t work for me is Hayden Thorpe’s whispery vocals, which fit the tone but mess up the mood and obscure what is an otherwise arresting production. (6)

Son Raw: “Maturity” is an oft-overrated trait in music but it suits Kuedo like a glove. Severant initially felt like a left turn from Vex’d’s psychotropic adolescent rave, but with hindsight you can draw a straight line from those demented bass lines to this minutely tweaked sound design. Throw in some ace songwriting and you’ve got an atmospheric bit for the ages. One complaint though: if you’re going to feature a vocal, push it up front. Scared money don’t make money. (8)

Haley Potiker: Calling an electronic genre “trap” doesn’t make any sense, because you can’t strip hi-hats from their context and erase everything else. This is the kind of grand, bloated, dramatic song that makes you remember why going out in 2013 was so tedious. (3)

Daniel Montesinos-Donaghy: At first this sounds like the soundtrack to a particularly moody car ad, before it segues into the type of smoothed-out trip-hop you’d find on side B of the Mission: Impossible soundtrack. You’re being sold something with this song, and it’s effective enough for that, but I can’t help but wish that Kuedo and a mumbling Thorpe had a more compelling product. (5)

Chris Kelly: The humidity in the mid-Atlantic seems to be slowing everyone down under a permanent layer of sweat. So: exactly the time for dancehall, especially dancehall so insistent, clear-eyed and – thanks to Devin Di Dakta’s vocal – straight-up raunchy. (7)

Daniel Montesinos-Donaghy: Devin Di Dakta’s strength is rainbow-bright slackness, evident in the crowd response to his insanely irritating earworm ‘Rrri Bam Bi Deng Deng’ at this year’s Sumfest – the fairly quiet crowd turn up almost immediately, airhorns sounding off their approval. He’s effective at this sexed-up bashment, and Equiknoxx sling him a riddim to immediately sex the legs off. Christian Grey and his rich kid S&M is evoked, mid-tempo drums drop out to allow the morning squall of a bird to ring out. The subtext is clear: you’ve been fucking for hours. (8)

Haley Potiker: It’s good that the dancehall invasion will never really happen in America because America doesn’t deserve it. Equiknoxx’s work is nimble, sometimes skeletal; here the duo enlists Devin Di Dakta for something hard-nosed that should play well as we stretch into the dog days. (9)

Tayyab Amin: Hearing this hook is the final straw for me, you know – I really need someone to teach me how to roll my Rs, I’m tired of missing out on these sing-alongs. Devin Di Dakta’s vocals are just infectious. (8)

Haley Potiker: Hyperdub says that Scratcha DVA’s new album as [Hi:Emotions] is a dystopian concept album about the stress of life online which examines, among other things, “faux-therapeutic advertising and psychotic jingles,” and I’m like, “I thought we already had Carly Rae Jepsen?” Anyway, the single — the title track from NOTU_URONLINEU — actually does convey a good deal of that anxiety and dissociation: floating melodies, blunt stabs of percussion, schizophrenic structuring. There’s also, six-and-a-half minutes in, a voice that pops in out of nowhere to say “I don’t love you anymore,” which I believe is most of our experiences with the internet. (8)

Chris Kelly: Too many ideas at once and too conceptual for my tastes. Call me old-fashioned, but I still like club music that works in a club – and the jazz breakdown halfway through didn’t help in that regard. (3)

Tayyab Amin: A little Ferraro in concept, a little Powell in execution. I’m into this. It’s a caustic wormhole of a track that sucks you in and, you know, you’re really gonna have seen some things, man. The artist says he made this in the dark ‘cause that’s how he enjoys listening to music. I think I’m gonna give myself some nightmares – dystopian megacorps are endlessly more harrowing than any monster. (7)

Son Raw: If this is what recording in the dark does to musicians, I vote we seal everybody up in sensory deprivation chambers with copies of Ableton to see what comes of it. Scratcha’s left-of-center approach has always held promise, but I couldn’t always get down with his politeness, preferring his earliest grime work. This splits the difference beautifully: all the experimental weirdness but applied to evil, mechanical pummeling. (8)

Daniel Montesinos-Donaghy: There’s two different versions around of ‘NOTU _URONLINEU’: the version to be released on a digital malaise concept album, an eight-minute piece that elongates The Orb’s mechanical fixations while leaving behind much of their New Age wonderment; keys twinkle too late, a charming but failed attempt at Gilles Peterson-friendly jamming. Then there’s the live recording on BBC Radio 1’s YouTube, an audio-visual take on the same song that eschews stuffy pretention for timing, chemistry and an ingenious overlay of Metal Gear Solid-style screens. In-studio, this takes itself way too seriously. On screen, the musicians assembled offer a more scintillating experience, one that brings the music out of DVA’s conceptual approach. Why rage against the machine when you can just turn it off? On record: 5, on screen: 8. (5) 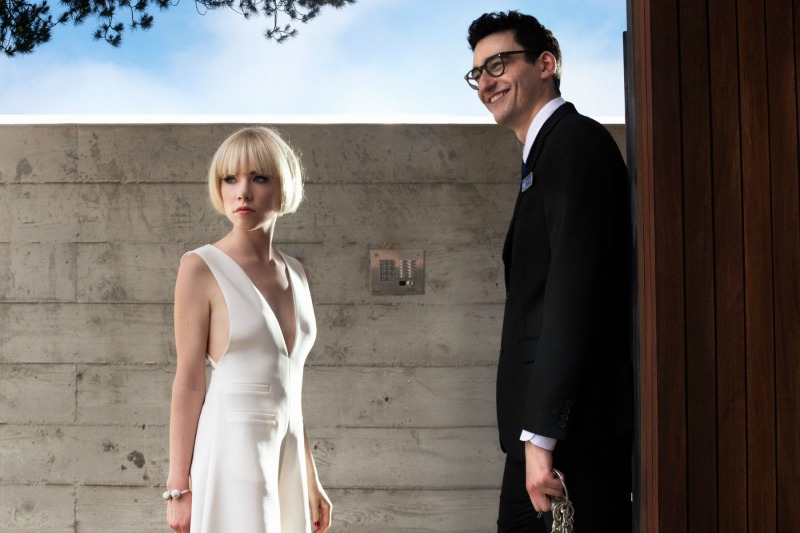 Chris Kelly: As solid as it is, I think there are limits to the ‘80s synth-pop nostalgia of Emotion and the Sia-Rechtshaid-Martin pop machine that helped produce it, so it’s great to see Jepsen work with one of the masters of PC Music maximalism. Likewise, Harle benefits from having a legit pop vocalist with whom to work, bringing this bubblegum confection out of art school and into the real world. (8)

Haley Potiker: Carly Rae Jepsen I, Queen of Williamsburg, is apparently being held at artisanal tofu-knife point and being forced to record whatever this is. Imagine if Disney had commissioned “Goofy EDM Song” for the Cadet Kelly remake and then decided “no, this is too much.” Is this a joke? At one point she says “I just don’t care what we do / Baby, it’s so bananas.” Can’t wait to tell my great-grandkids about the PC Music era! (0)

Daniel Montesinos-Donaghy: For all the hand-wringing I’ve put myself through over PC Music on this very website, I accept what they are: An Idea that allows people to feel comfortable about their poptimism, to define their base music pleasures by concepts. It’s fine – I buy into it, it’s an umbrella term that appears as glossy experiments to lend Charli XCX and Carly Rae Jepsen thinky-thinky bonafides (for material too strong for this to ever be an issue, but I digress). Anyway, this is a good song. We have over-intellectualised our pop music – or maybe I have, allowing the PC Music movement to get me in a tizzy? My head hurts. I wish it throbbed because of this song’s sugar rush. (7)

Tayyab Amin: Squeaky like halloumi and as charming as the juice. There are some nice touches to this track but I really can’t find anything to hold onto, to remember it by. And it’s not like anyone’s done a bad job or anything… it’s just another (Y) in the Messenger conversation of life. (5)

Haley Potiker: I don’t understand what’s happening with the Twin Peaks reboot, because I refuse to understand what’s happening with the Twin Peaks reboot. There’s been so much personnel turnover (including the in-then-out-then-in nature of David Lynch’s involvement) that it hardly feels like an exercise worth doing at this point. But apparently the thing is really happening now, so Chrysta Bell’s new single has a convenient news hook. Which is a good thing: the appeal of Bell has always been the idea of conventional pop that’s been art-ed up in post-production, a mostly winning combination given how compelling her voice is. (7)

Tayyab Amin: I love the way this beat sashays its way to the dancefloor, but you don’t get to strut that whole distance without making some moves once you get there. Cold wind seems to permeate the fringes of the track, interacting with Bell’s just-try-me voice reverberating everywhere. The way it teeters on the edge for the whole duration makes it an addictive listen. (7)

Son Raw: 99.8% of the time, attempts to resurrect the weirdness of early Americana for contemporary times results in the kind of studied shoehorning that precludes any actual weirdness. The other .2% involved Tom Waits or David Lynch. Wisely, Christina Bell does the heavy lifting here, with her voice and pathos cutting through the fog of electronics to hint at the psychological murk just beneath the placidity of suburban life. Twin Peaks is gonna be so good. (6)

Daniel Montesinos-Donaghy: You can understand why John Parish chooses to work with Bell, as she shares the shuffly type of performance that his other collaborator PJ Harvey favours: there’s grace in sharp angles and muffled repetition. Musically, it’s closer to Neneh Cherry’s underrated collaborations with RocketNumberNine, allowing a vocalist to vamp around a tight-yet-minimal band. That’s high praise for Bell to be met with in my opinion, and a pleasant surprise after learning she was involved in the making of Inland Empire. (I hate hate hate Inland Empire.) (7)

Haley Potiker: I know that if you click on a Green Day song you have to reasonably expect Billie Joe to say things like “I testify like a lullaby of memories,” but that doesn’t mean I have to like it. (4)

Tayyab Amin: Some of these riffs feel way too familiar for me to not rate this, and immediately after the song ended I opened up Green Day’s Wikipedia and jumped into a Youtube wormhole in a good way. The urgent drums and the Billie Joe’s smirking lyrics are as sharp as the group get, really. My housemate Robin who works at Norman Records and may or may not officially represent the company is sat next to me drawing similarities to a Strokes solo. He’s also yelling, “Give it an 8!” (8)

Daniel Montesinos-Donaghy: This is how you make Green Day sound good, not just in 2016 but For All Time: keep them away from their Broadway instincts, make them go fast, leave their political message to be as thorough as a tweet. Allow the (highly polished) attack to commerce. (6)

Son Raw: Never trust an adult who listens to pop punk and never trust a teenager that doesn’t. This is fine if you’re 16 and completely beneath you if you can legally drink. (0)