Japan’s love affair with reggae dates back forty years when, in 1975, The Pioneers became the first reggae act to tour the country. In 1979, Bob Marley and The Wailers kicked off their Babylon By Bus tour at the Shinjuku Kosei Nenkin Kaikan concert hall in Tokyo and a year later Japanese percussionist Pecker flew to Kingston to record his debut album, Pecker Power, in the Channel One and Tuff Gong studios.

Predating all this is a little known link between Japan and reggae. In the mid-60s ‘Ringo Oiwake’, a song by Hibari Misora, then a teenage Japanese singer and actress and soon to become a beloved pop icon, provided the melodies for and name to a ska cut by Johnny Moore and The Skatalites. The track, which used the word ‘ringo’ (which means “apple” in Japanese) to reference cowboys, was then slowed down by The Soul Vendors, the Studio One backing band, and turned into another popular instrumental titled ‘Ringo Rock’. It even made a return in 1987 with a Celtic-tinge on The Trojans’ ‘Ringo’, complete with Japanese lyrics.

How does a Japanese song from 1952, originally recorded for the movie Ringo-en no shōjo, end up as the source for a ska tune 10 years later? Economic forces, of course. While no one seems to know for sure, Japanese workers were present in Jamaica in the 1960s for engineering projects and it’s not hard to imagine that they would have brought music with them. From there, the musical grapevine did the rest of the work. What this curious story of accidental musical pollination also revealed was the similarities between the rising popular genres in Jamaica and Japan at the time. Both reggae, which grew out of ska, and enka, a purposefully retro style spawned out of the all-encompassing kayōkyoku pop music term, slowed down familiar rhythms and made use of minor keys as well as drums and guitars. To anyone raised on either genre, the similarities were apparent.

Kiki Hitomi, a Japanese singer best known for her work with King Midas Sound alongside producer Kevin “The Bug” Martin and poet Roger Robinson, made the connection between enka and reggae after becoming fascinated by the latter in 2000. “Horace Andy, the way he sings is totally same as enka singer, like throat-singing,” Hitomi tells me enthusiastically. Speaking from her current home in Leipzig, Germany, a rolled-up cigarette lodged in her right hand, Hitomi recalls thinking how “Japanese enka singing could fit with a reggae beat.” Somehow it seemed nobody had attempted to combine the two in a modern way yet.

The Japanese band Little Tempo, known for its steel drum dub, has toyed with the melodic similarities between the genres but a Google search for ‘enka reggae’ only returns a 2009 Universal album by the Regga-Enka Allstars that sounds like a bad racist joke signed off by a deaf music executive. Hitomi had long been fascinated by the sadness of enka’s minor chords and in late 2012 she decided to explore what she calls “heavy, bass music enka”. The result is Karma No Kusari, a debut album that pulls the musical connections between Japan and Jamaica into a psychedelic space where the melancholy of enka and the vibrations of reggae take on new shapes.

Originally from Minoh, a suburban city north of Osaka, Hitomi moved to England in the early ‘90s. She initially studied English before embarking on a degree in art, which led her to a first career in graphic design for a skateboard company alongside her then-husband. Following a divorce, Hitomi moved to Dalston in the mid–2000s and decided to shift her creative focus to singing, despite having no musical training to speak of. “I needed a different input in my head, I wanted to move on from the past,” she explains. The cadence of her voice still betrays Japanese roots but her accent is coloured by years of living in England, oscillating between west country and east London depending on the emotions she’s conveying.

Hitomi’s desire to explore music took off after a chance meeting with another Japanese expat, Goh “Gorgonn” Nakada, who had come to view her flat. Hitomi introduced Nakada to reggae and lover’s rock, music she’d become fond of, and Nakada played her the early dubstep productions that were emerging out of south London. Under the name Dokkebi Q they made music influenced in equal parts by Jamaica, the UK dance scene, and edgier, experimental electronics. After the second song they’d recorded, ‘Black Vomit’, was included in a Japanese dubstep mix shared online by 100Mado, a Tokyo DJ and early champion of the music in Japan, they were asked to perform around London.

“I wasn’t ready for singing on stage or anything, I never sang in public,” Hitomi recalls with an uneasy laugh. “I always got super drunk before because I was so scared.” She was thrown in at the deep end. Between 2007 and 2010 Dokkebi Q toured Europe and Japan and released a string of EPs culminating in their first and only album, 2010’s Hardcore Cherry Bon Bon. By then, Hitomi had started working as part of King Midas Sound, a new project where, with help from Kevin Martin, she discovered new ways to sing and express herself. “King Midas’ music was perfect for me at the time,” Hitomi recalls. “I discovered a different side of me, a different Kiki. It was fascinating.” 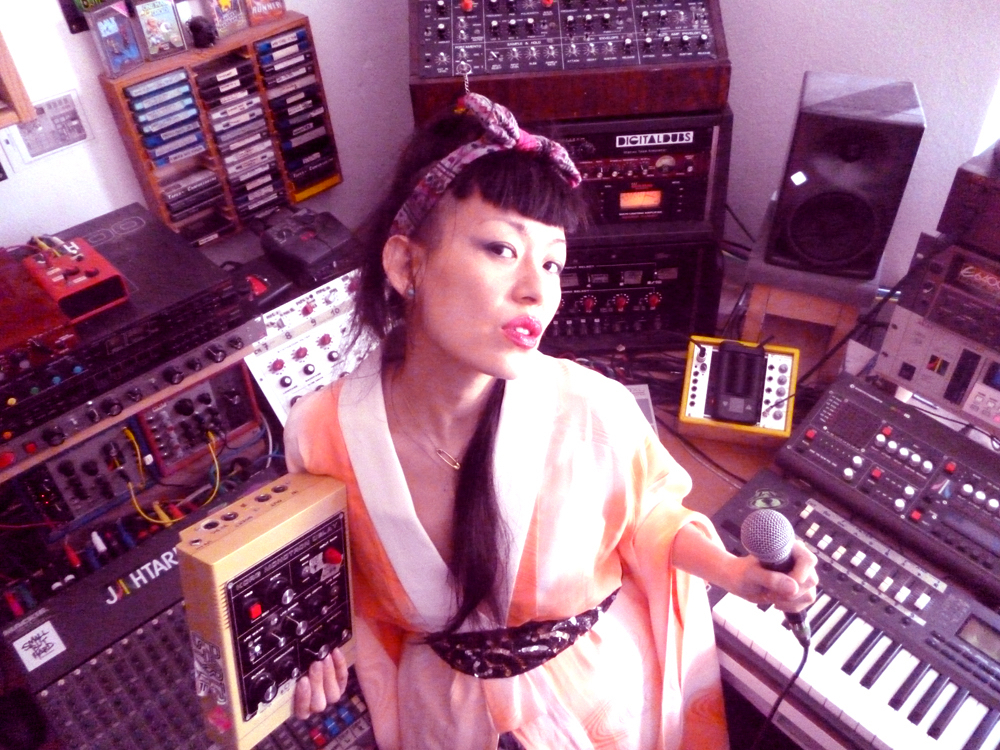 In 2012, Hitomi left London for Berlin. Despite the success of King Midas Sound, she was unsure as to where exactly her music career was going. A year prior, she’d released an EP as Black Chow, a short-lived duo with Martin, on a small German imprint called Jahtari. The label is based out of Leipzig and run by Jan Gleichmar, who produces 8-bit electronic dub under the Disrupt moniker. She reconnected with Gleichmar in Berlin after a show and then noticed he was sharing Japanese videos online, including enka songs by Hibari Misora. By the end of 2012, the two were discussing how to bring Hitomi’s idea for enka reggae to life. Gleichmar, whose interest in Japan dates back to winning a book about the country in 1985 at a school competition in East Germany, sent over some track demos and Hitomi travelled to Leipzig in early 2013 to record. The sessions came to a sudden halt after Hitomi and Gleichmar discovered they were pregnant. The two decided to focus on becoming parents and what had begun as a fun idea became a new chapter in both of their lives. Upon returning to the project in late 2014, they fleshed out the handful of track ideas into an album.

The unexpected life changes Hitomi went through in the past three years — a move to a new country and new cities, the uncertainty of work, a new family — had a profound effect on her and she likens the suspension of the album’s recording to the process of giving birth. It wasn’t until she’d recorded the last song, a short interlude from which the album takes its name, that she felt she understood what the album was about. Karma No Kusari, or ‘chain of karma’ in Japanese, represents her desire to break free from the weight of pains and past mistakes. “I wanted to cleanse my body, of everything, all the heavy stuff from my past,” she says. “I believe in karma and I felt like I had changed. The chain of karma had changed, it was cut off. I wanted to tell myself, and also to other people, to live in the moment. Enjoy right now. Let go totally. Cut the chain of karma.”

Karma No Kusari also features one notable guest, the late Stephen Samuel Gordon, better known as The Spaceape, who contributed a poem to the project before his death. Hitomi had known Gordon for a few years through shared friends and they regularly exchanged music and ideas. In 2012 they collaborated on the video for ‘On The Run’, a track from his debut EP Xorcism. Hitomi painted Gordon’s body in tribal motifs and the claustrophobic video, in which Gordon writhes against a black background, was shot in her Dalston bathroom.

“He was so powerful, I was blown away,” Hitomi says of his performance. Gordon’s death two years later, from a rare form of cancer, shook her. “I was puzzled by it,” she admits. “His daughter was still young and I’d just given birth. I was thinking, ‘If I go away now, how would she feel?’ I don’t know how he did it, living his last few years with cancer.” Gordon’s poem anchors the track ‘Nen Nen Korori’, which is based on a famous Edo-era lullaby. When she asked Gordon to contribute something, Hitomi was still “living in fear”, worrying about where to move after London and heavy from a break up. She asked him to write a poem for a little girl, to explain to her how she could conquer the fear. “The girl was me and his poem was perfect,” Hitomi says. “I wasn’t sure I could include it in the album but I spoke to his wife and she agreed. He’s immortal for us, he lives on in the music.”

At 25 minutes long, Karma No Kusari is brief and concise, designed as “an epic journey”, with atmospheres and interludes transitioning the listener between different stages of a sonic movie. The blend of enka reggae that birthed the album is most evident in two songs — ‘Pink No Kimono’ and ‘Yume No Hana’ — while the remaining tracks flirt with various Japanese, Jamaican, and modern aesthetics: the hip-hop and dub mix of ‘Nightwalkers’ with its slow, Godzilla-like crawl; the steppers vibe of the autobiographical ‘Yellow Story’; the ghostly melancholy of ‘Nen Nen Korori’; the swirling arpeggios of ‘Galaxy’, a theme tune for an unwritten anime space opera. 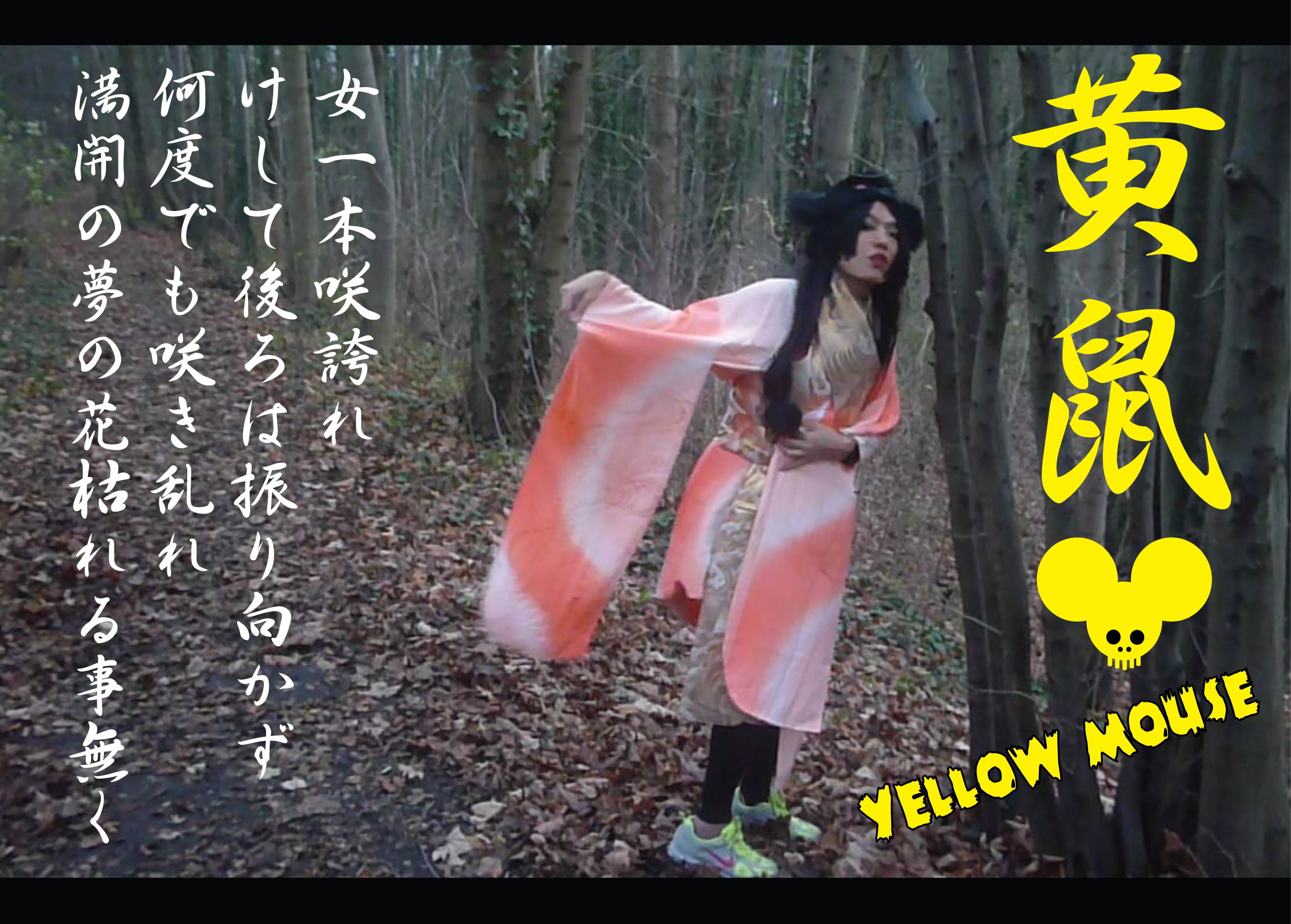 In King Midas Sound, Hitomi’s voice fits a precise role in the sonic vision of Martin, who directs the project. “I have to have a certain tone to my voice which Kevin likes, but this time I was free to do what I wanted,” she explains. The singing on Karma No Kusari alternates between delicate, sad and quirky borrowing not just from enka at its most melancholic but also from the late ‘70s anime Hitomi grew up watching and the samurai movies her grandmother had on when she returned from school. Being constantly subjected to enka and enka-like music as a child left a profound mark on Hitomi. “I sing like pop but sad and a bit creepy, spooky,” she says. “I always like to write things in sad, minor chords.”

Recording the album also offered Hitomi a chance to return to the more collaborative writing process she’d known with Dokkebi Q. “We worked on the songs beyond voicing, getting into different structures, layers, and atmospheres,” says Gleichmar. “Kiki has brilliant ears and intuition for that and she knows exactly what she’s aiming for.” Karma No Kusari was also a chance for the producer, best known for his digitised take on Jamaican music, to expand his own range and dive into the melodic structures of enka to see how best it could fit a modern, bass-heavy electronic sound. “The harmony progressions and structures are unlike Western music but it was surprising to hear a classic enka arrangement played with a Commodore sound chip, beats from an MPC and strings from an old Casio keyboard.”

More than anything, Hitomi hopes the healing spirit of the music will translate to listeners. That all the emotions she poured into the lyrics, chords, and rhythms can be felt even if they’re not understood. “I sang the album the enka way, from the belly,” she tells me. “I think people can catch that without understanding the language.” She’s probably right. After all, if music didn’t transcend the barriers of language, why would a bunch of ska musicians from Jamaica think to cover a Japanese pop song they had no understanding of?