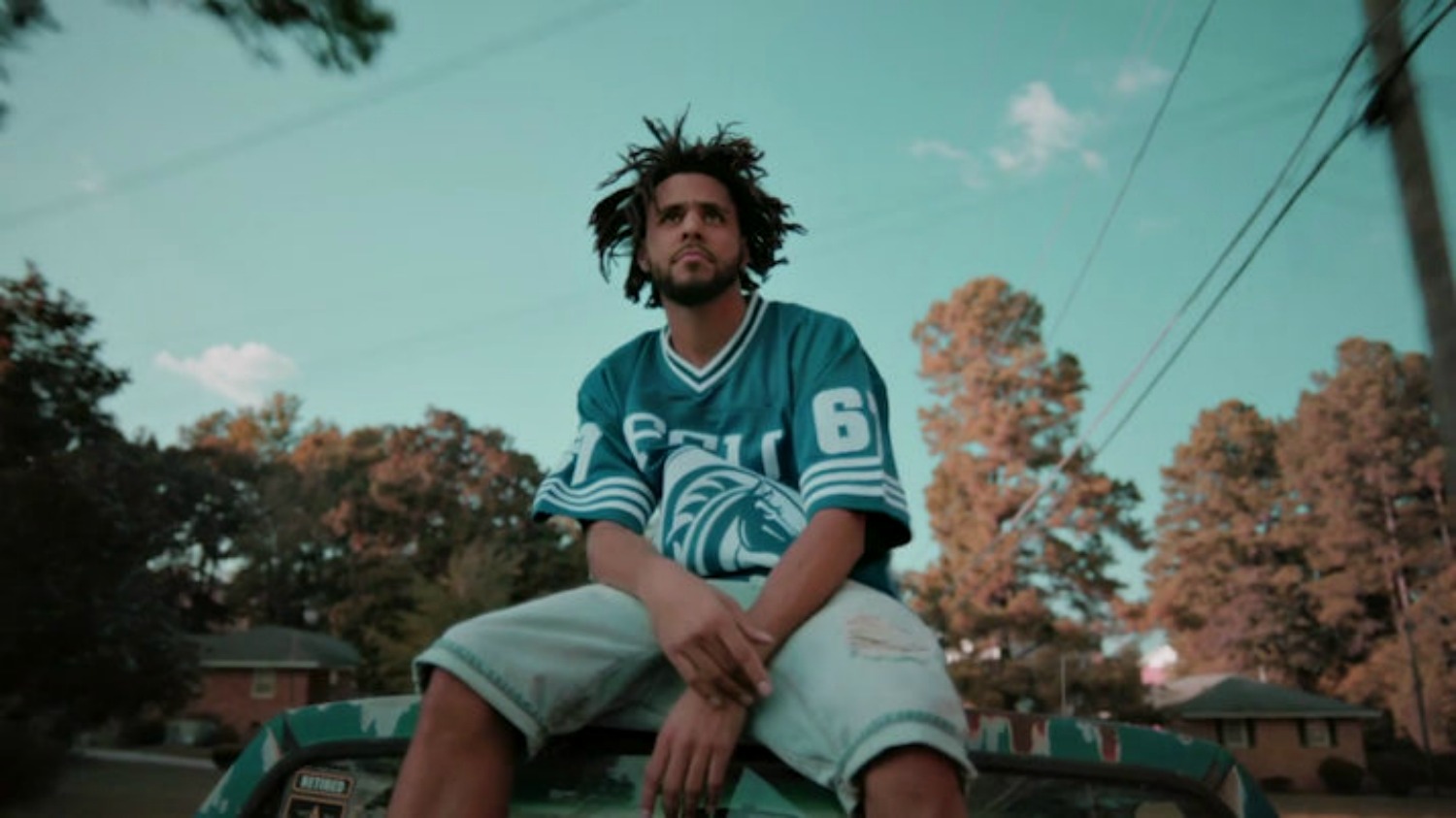 Daniel Montesinos-Donaghy: ‘False Prophets’ is universal enough to allow for any number of artists to fit into his narrative of disappointment, but c’mon, let’s face it, he’s talking about Kanye. They’re apples and oranges, so it’s worthless to compare their musical efforts, but Cole’s not lying about topping his old material – you come to Kanye for discord, Cole is about steady growth. (7)

Haley Potiker: J. Cole, whose most recent radio hits are about losing his virginity and pretending to have sex with sitcom actresses, respectively, is mad at rappers who are not sufficiently honest with themselves. ‘False Prophets’, which cribs a beat that Joey Bada$$ previously cribbed from Bandcamp, has been widely interpreted as a critique of Kanye West. You will enjoy this if you have your height in your Twitter bio. (3)

Chris Kelly: J. Cole is exactly what’s wrong with hip-hop: namely, the poisonous nostalgia that rejects anything that isn’t from the listener’s personal Golden Age, be it Tribe or Biggie or whatever. After picking at the bones of College Dropout for years, Cole joins the anti-Kanye bandwagon – because clearly the way to confront someone’s mental health crisis is with some milquetoast BARS. Hopefully the second verse will cause an endless back-and-forth between Cole and Wale that results not in bullets but songs I will never have to listen to. (0)

Tayyab Amin: I really liked this track when it was released back in the year 2006 on the album Food & Liquor by the artist Lupe Fiasco. I was 13 years old and fully ready to educate you on Real Hip-Hop™. I’d get home from school, write rhymes and post them on DeviantArt, and to be honest they too probably started with “Life is a balance…” (5)

Son Raw: This is like when that kid nobody fucked with in high school got up in the middle of class and called all the popular kids ‘fake’ before storming off to smoke cigarettes out back. I know Nas hasn’t dropped since 2012 but boom-bap heads gotta be really desperate to be coming back to this guy. (2)

Tayyab Amin: AJ Tracey went to the Canary Islands for the video and his music also feels like it’s wandered across the Atlantic. It’s clear his sights are set beyond Rainy Fascism Island, and his two-year hot streak undoubtedly warrants that, but this one lacks a bit of the charisma that drew us towards him in the first place. (6)

Chris Kelly: I was hoping for something like ‘Naila’ but I got a song by someone who just heard Juicy J for the first time. Tracey’s flow and style are infinitely more interesting when he sticks to grime rather than taking Southern rap for a spin, building to consonant punchlines and overdoing the ad libs. (4)

Daniel Montesinos-Donaghy: Every time AJ Tracey pops up in Singles Club he deserved top marks, but the star of the show is definitely producer Nyge’s assemblage of bleeps, an odd backing for an excellently worded ownership of wealth. Also, Trace wears a chef’s hat in the video and it’s hilarious so: (8)

Son Raw: AJ Tracey spent the year leaving his ‘new wave’ peers in the dust and this is the sound of consolidating gains. ‘Pasta’ is trappier than anything he’s put out (sonically) but it’s the pitch-black chords, not the tick-tock drums, that keep this one winning. Lyrically, the topics are bleak but never boilerplate, and like the best rap from any city, you’re left feeling convinced. (7)

Zoe Camp: Most of Kehlani’s instrumentals up to this point have been on the wan side, ethereal and hazy as spliff smoke, so it’s nice to hear more oomph from the boards on ‘Advice’, a piano-driven beat onto which her heavenly falsetto can latch on and inch ever-upwards. Between the Wildheart-reminiscent artwork and the overarching bedridden mentality, Miguel comparisons are inevitable – still, Kehlani’s got a style–and a sass–that’s all her own. (7)

Son Raw: If this were any more sugary it would have to be regulated and marketed as high-fructose corn syrup. (3)

Daniel Montesinos-Donaghy: It’s obviously not been the greatest personal year for Kehlani, but artistically 2016 has been a strong time for her between ‘CRZY’ and her contribution to the Suicide Squad soundtrack, ‘Gangsta’. With ‘Advice’ she’s reflecting on learning from past mistakes, the type of thing you don’t hear people (artists or otherwise) speak about: how following through on personal revelations is the hardest part of recovery. I’m rooting for her. It helps that the song’s are strong but dammit, I’m rooting for her. (8)

Chris Kelly: I only want the best for Kehlani – especially after the disgusting online abuse she faced, and it’s nearly tragic ending – but I’ve found everything since Cloud 19 to be heavy on sizzle, light on steak. Sad to say, but she just might not have the range to be the next pop-R&B superstar. (6)

Haley Potiker: Like all good pop music, this song sounds vaguely familiar, like you’ve just reached the end of the rom-com and Lindsay Lohan and Jamie Lee Curtis finally figured out how to swap bodies back. (6)

Tayyab Amin: I’ve seen Florentino play twice this year and I’ve stuttered and stammered about how good he is to anyone who’d listen, but his FACT mix of mostly self-produced material did all the talking for itself. This is from that mix of course, and it’s a good taster of what to expect from his work: rambunctious, passionate energy, irresistible rhythms and infectious vocal shards all amounting to a rallying call towards the dancefloor. (9)

Chris Kelly: With copy-of-a-copy versions of dancehall still proliferating on the radio, it’s great to hear someone get to the heart of reggaeton, especially from an underground club music perspective. On ‘Bloodline’, Florentino takes the martial, metallic attack of his work as Samename in romantic new directions. (8)

Son Raw: I’m not sure if I want to party to this one or march a gang of outlaws menacingly down a dusty country road for a clash with the authorities. Swing Ting gets my label of the year award and this track is the cherry on top of its 2016 sundae of releases. (8)

Beatrice Dillon – ‘Can I Change My Mind?’

Zoe Camp: Beatrice Dillon has pulled off the rare feat of sounding tuneful without using any tunes at all–the cut derives all its frisson from the shuffling, distorted rhythm, rather than any type of melody. And you know what? I don’t miss that do-re-mi-fa-so-la-ti-do bullshit one bit. (8)

Tayyab Amin: Listening to this is like walking through the desert without all the bad parts like going hungry, getting tired or worrying about being lost. Instead it’s content to wander and observe the illusory sightlines, feel the crunch of dust and stone and the oddities of the cacti. Beatrice Dillon delivers something that moves you with its minimalism, that gives you space with its intimacy and encourages you to forget about time by bringing it to you. (8)

Daniel Montesinos-Donaghy: I don’t want to appear a simpleton for thinking this about some austere crackle-led IDM but holy shit this does not need to be 13 minutes long. [Simpleton – Ed.] (3)

Haley Potiker: This would probably get me into a good rhythm if I were trying to tie knots on a commercial fishing boat or cleaning windows in a dystopian Dubai. (5)

Son Raw: Minimal has been a byword for tasteful (and ketamine, mostly ketamine) for so long that it’s easy to forget that sounds this stripped-down are brimming with possibility. Allow Beatrice Dillon to remind us, mostly by injecting 30 BPM-worth of energy into the template, taking us outside the realms of plodding predictability towards what I wish more current drum and bass would sound like. (8)

Chris Kelly: Between her cringeworthy portmanteau and my general distaste for British rap, I braced myself for the worst. Thankfully, my fears were quickly erased: she’s got personality and swagger for days, and unlike Young M.A’s ‘OOOUUU’ – which I’ve seen it compared to – this is a banger with a hook. Now we just need to keep Badman Drake off of it. (7)

Tayyab Amin: This bangs too hard for me to care about the terrible ad lib or the pause in the video for a DJ Khaled co-sign. Firstly the beat is ridiculous, and then there’s Stefflon Don’s patois entrance – she comes through with unstoppable intent. And damn, she really just stopped the track with “big brown bloodclart batty for your dinner.” (7)

Daniel Montesinos-Donaghy: If K-pop hypebeast CL did a take on Young M.A’s ‘OOOUUU’ it would probably sound like this, which is to say that this is an excellent Xerox with enough local signifiers to feel slightly different. That’s also faint praise, but ‘Real Ting’ deserves faint praise. (5)

Son Raw: That bootleg ‘OOOUUU’ beat isn’t doing this one any favors, even if Stefflon is clearly a star in the making. The ragga-turned-UK-drill flow and patois inflections hit the jackpot and she’s got charisma for days – let’s hope the next backing tracks match the rudeness. (6)

Haley Potiker: Somewhere in the middle of ‘Real Ting’, the East Londoner pauses her single to make good on a lyric about a DJ Khaled co-sign. “Big ups Steff, bless up,” the We The Best mogul says in a Snapchat video cropped center screen. He’s one of maybe five men to appear in the video, which is otherwise an all-female mansion party complete with cash, furs, and an indoor pool. It’s like when Kesha got Diddy to talk on her first single, except with less Coconut Ciroc. (6)