Ravers on a train: How Mount Kimbie turned a rail carriage into a moving musical instrument

Earlier this year, Warp duo Mount Kimbie took a break from crafting their long-awaited third album to visit Warsaw, where they turned a train into a “moving musical instrument” complete with guard rails and handholds that passengers could use to manipulate the musical performance. FACT’s Tom Fenwick joined them to see if the ambitious idea would succeed or derail.

It’s late on a Friday night and I’m standing on a bustling platform waiting to catch the train. This isn’t unusual; as a kid I found myself killing time at train stations on more weekends than I care to remember, idly checking timetables to make sure I wouldn’t have a long walk home. But back then it was the destination that made that wait seem worthwhile — whether I was heading to a club, or back to the solace of my bed. This evening however, is different.

A great philosopher once said, “Sometimes it’s the journey that teaches you a lot about your destination.” And as the diesel engine chugs into view on the horizon, there’s a curious excitement in knowing that tonight, the journey and destination are the same place — the train is the party and it’s coming down the line.

I’m in Warsaw to witness a one-off event featuring Mount Kimbie, who’ve teamed with beer company Desperados for an event aptly titled Train Trax. It’s the third in an ongoing series of novelty musical experiences from the booze manufacturers, who – presumably inspired by the likes of other beverage-makers’ profitable marketing adventures into dance music culture – now have a string of promotional events under their belts that feel like they were brainstormed in the post-club haze, with a proper budget and an army of technicians. There was the time they turned a house into a living instrument, filling it with DIY musicians and street performers for that added stomp-factor. And don’t forget the time they took to the skies above Nevada to create an in-flight bass drop . (This, I’m reliably informed, was just as fun as it looks on video — though in Zero-G conditions I’d have almost certainly “released my inner tequila”, to borrow their campaign catchphrase, all over the plane.)

Happily, Train Trax isn’t anywhere near as nausea-inducing a sonic experiment. Tonight’s transport, we’re told, is going to be turned into a “giant moving instrument.” The experience itself is divided across two carriages: the first compartment includes a dancefloor, giant TV screens and floor-to-ceiling lighting — and while there’s nowhere to get a rubbery sandwich and a lukewarm coffee, there is a bar serving – you guessed it! – Desperados. 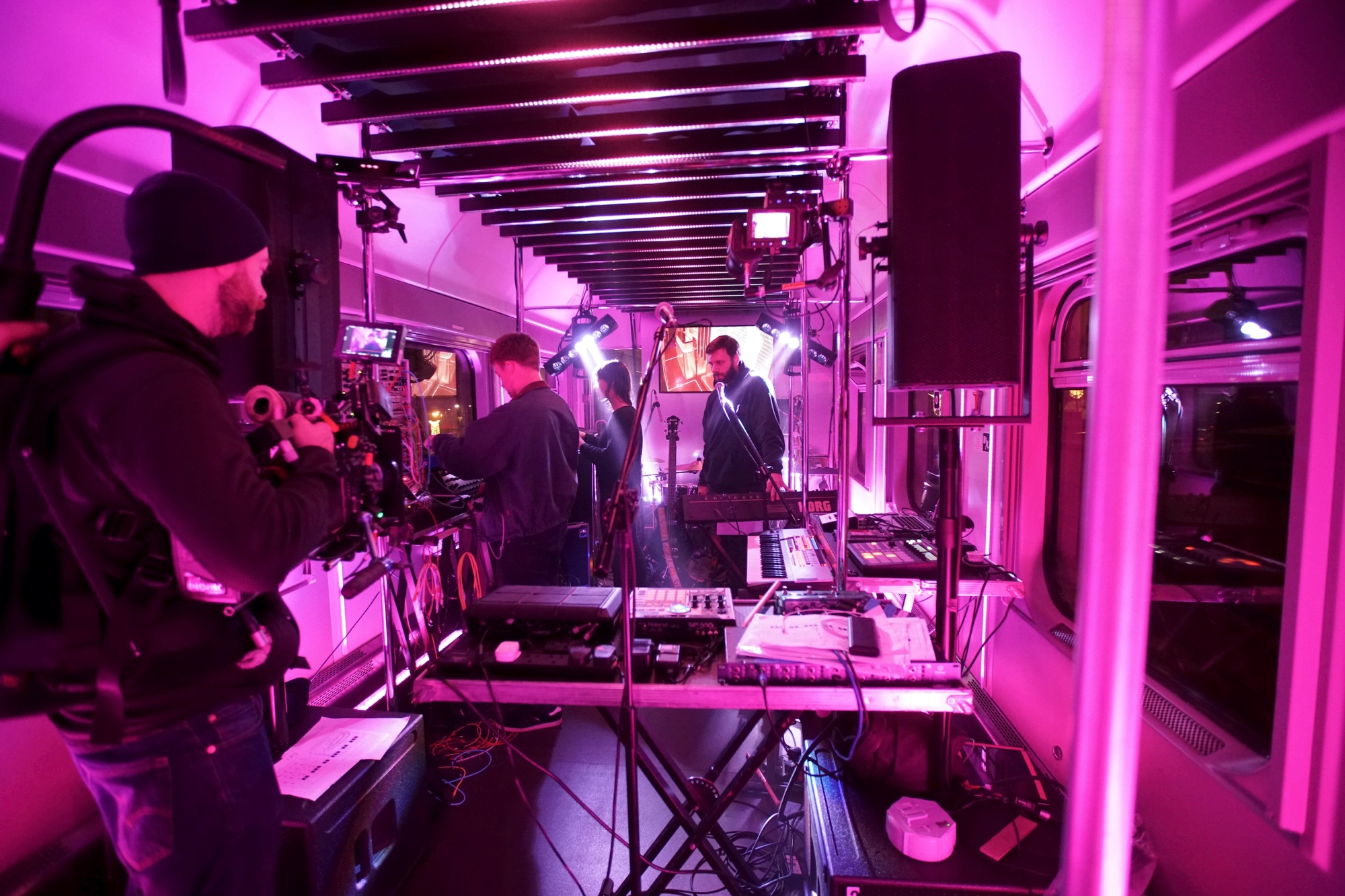 The second area is the musical hub, where Mount Kimbie are set to perform to a group of lucky Polish fans. Or at least they did on the first circuit of the train. When I hop onboard it’s with a handful of eclectic and excitable camera operators, journalists and people dressed in panda onesies (who I’m later told are ‘influencers’).

The technology behind the train is pretty clever. The carriage they’ve rigged with Mount Kimbie’s gear has overhead handholds that trigger samples and audio-visual effects when you grab them, and safety poles (similar to those on a subway train, but bigger and shinier) that gently alter the harmonies of the sound. There are also environmental triggers, like external RFID receivers on the line that cue onboard sensors, converting them into musical notes for the band to integrate in their tracks. And finally there’s a speed monitor to dictate the BPM, increasing the tempo of the kick drum as the train shuttles us through the night.

I caught up with Mount Kimbie (aka Kai Campos and Dominic Maker) to ask how they got involved. “[Desperados] were looking for an act who could be free in their performance, and we were up for the challenge — especially playing in such a confined space and combining the audio triggers with our music,” says Campos.

“We had a lot of input and a lot of ideas,” adds Maker. “And then just dealt with the limitations when we got here”. The lack of control with inputs, especially when the audience can affect the band’s sound, might seem daunting, but the duo found it liberating. “The tech team told us what data we’d receive, and we figured out the best ways to interpret that,” says Campos. “And there’s so many ways to do that with modular synthesis, so it really allowed us to geek out”.

Having not released a record since 2013’s Cold Spring Fault Less Youth, I ask if they were happy with the reaction of their fans. “We haven’t played live much in the last few years,” Campos replies. “So anyone who wanted to come out and see us is just great — especially because this is such a unique gig, y’know, coming to see a band play on a train.”

The triggers work, at least. It’s undeniably fun to change the cameras pointed at the crowd to thermal ‘Predator vision’ imaging, but most of the time it’s hard to understand what you’re affecting and how. Meanwhile, the external RFID triggers and light show — which happens midway through the trip — might look incredible from some angles, but inside it’s pretty hard to tell what’s going on. 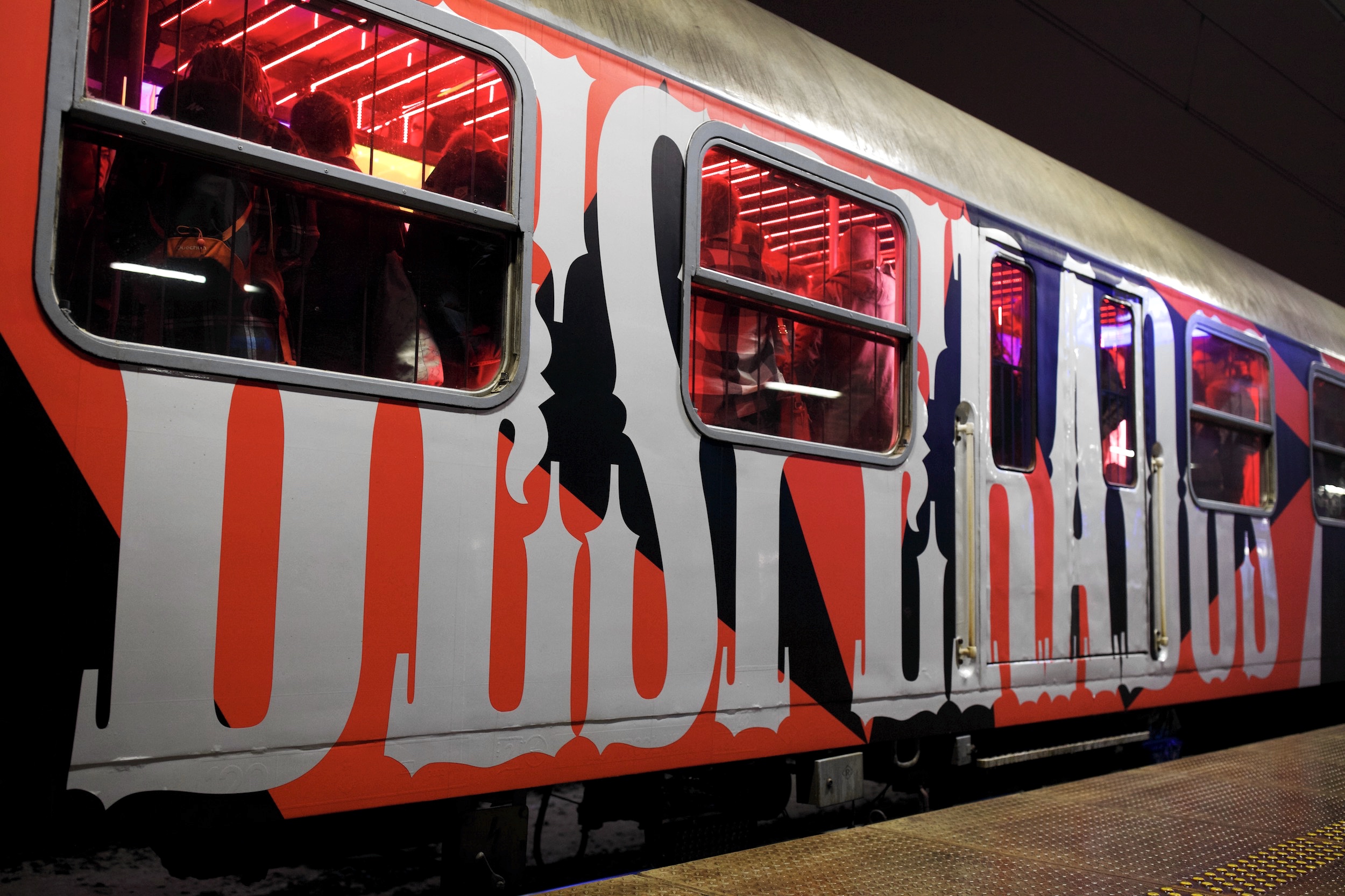 As for the band, accused by some of sounding a little anemic on record, in the densely packed train they come alive. ‘Home Recording’ takes flight like an astral jam and ‘Before I Move Off’ skitters through its R&B influences. New track ‘Synthi’, however, rattles at a furious pace, showcasing an avant-garde side to the band and making the thought of their upcoming LP much more promising. (A “train remix” of this track is due to land later this year.)

As we all disembark, I overhear someone say, “Just think how cool it’ll look when it’s edited together!” And they’re right, it’ll no doubt look great as a 90 second clip. But it makes me wonder what the three months of planning, four days of tech rehearsals and two gigs that it’s taken to get Train Trax to it’s final destination really means. Especially when the end result appears to reward spectators after the fact, more than participants at the time. These thoughts are left to rattle around my brain as I head into Warsaw’s city center, trying to regain control of my “inner tequila”.

Read next: Behind Radionics, the wacky sound therapy that turns thoughts into music