Features I by Daniel Montesinos-Donaghy I 29.03.17

Ghost in the Shell review: A glossy update that misses the point but isn’t the disaster expected

Cult 1995 anime Ghost in the Shell is beloved for its peerless soundtrack and striking visuals, but the Scarlett Johansson-fronted remake looks to be memorable for all the wrong reasons. Daniel Montesinos-Donaghy reviews one of the year’s most anticipated – and controversial – sci-fi movies.

Last week, Mamoru Oshii spoke up regarding the Hollywood adaptation of his 1995 directorial breakthrough Ghost in the Shell. In an email to IGN, the filmmaker defended the casting of Scarlett Johansson in the role of cyborg crimefighter The Major, originally a Japanese character called Motoko Kusanagi. He wrote, “What issue could there possibly be with casting [Johansson]? […] There is no basis for saying that an Asian actress must portray her.” No basis? Uh-oh.

There was always going to be a backlash surrounding an American adaptation of a Japanese animated film. Remember the Akira reboot that just wouldn’t die? However, the Ghost in the Shell backlash has gone beyond trying to please disillusioned fans. In May, the first images of Johansson with Kusanagi’s trademark haircut and bomber jacket pissed off a lot of people, sending alarm bells ringing regarding the continuation of Hollywood whitewashing. By February, Johansson had to address it, telling Marie Claire that the decision to play Kusanagi was about feminism, not race; that didn’t go down too smoothly. This would-be blockbuster has had to play the defensive streak, and comments like Oshii’s will not lighten this film’s baggage before it reaches audiences.

Oshii’s Ghost in the Shell is an important film, a cinematic distillation of cyberpunk aesthetics and philosophical ponderings that struck as part of the early ‘90s first wave of internationally renowned adult anime. Its influence is vast; there’s no Wachowskis without it, and to that extent, no Matrix. It is also (don’t hate me, internet) a mostly insufferable experience, tied up in knots of psychobabble performed by coolly blank seiyū. It certainly inspired The Matrix’s designer-clad cool, but it’s also just as responsible for Neo cutting it up with The Architect. Ergo, vis a vis 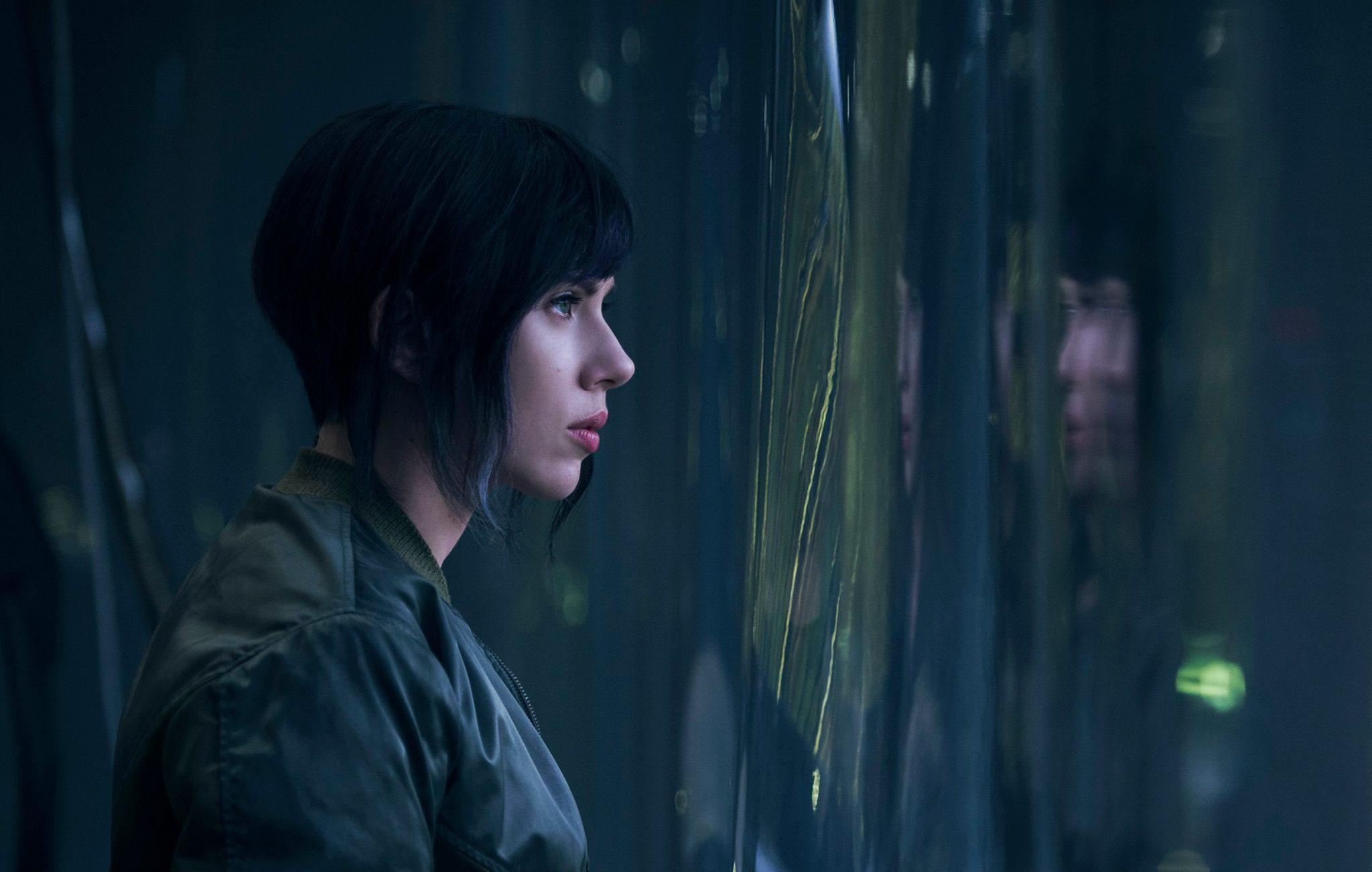 Ghost in the Shell is a film defined by emptiness

Rupert Sanders’ Ghost in the Shell 2K17 is not an important film. It is sometimes good, mostly passable, but not important. It is a given that the film will remain important as a beacon of whitewashing and the continued discussion of adept representation in mainstream cinema. However, the film the controversy centers around will not have the impact the original did.

Oshii’s film was elusive and talky, the result of a cineaste learning all the wrong lessons from a Jean-Luc Godard obsession. However, it had its moments of pure beauty: in particular, a wordless sequence where the lead character walks the rainy streets and canals of a lovingly sketched metropolis. Kenji Kawai’s haunting score, an intense blend of modern ambience and folky echoes, makes these moments transcendent. This even extends to some action sequences, most famously a fight sequence set in ankle-deep water.

Sanders recreates this classic sequence, in his particular ex-ad director way: glossily but without pep, Kawai’s score replaced by Clint Mansell and Lorne Balfe’s techno-tinged thump. Sanders has never met a slow-motion shot he didn’t like, and he indulges his lack of action cinema knowledge with this type of juddering movie-making. His approach to the high-tech Hong Kong metropolis in the film is at times gorgeous, despite erring too close to a production design showcase than a believable environment.

This approach also extends to the costumes and make-up, which finds Juliette Binoche (far better than what she’s given) and the great yakuza director Takeshi Kitano (wasted bar a moment of gunslinging) looking like Christopher Kane mannequins and Tekken characters. Sanders is not graceless, but his focus on crafting the shiniest possible shell is at the expense of filling that shell with content.

Johansson makes the film work, but should it really have been her?

It’s a bitter pill to swallow after all that, but thank the heavens for Johansson. There’s some Black Widow in her (and her stunt double’s) portrayal of The Major, but there is more in common with the films that marked her 2013 sci-fi peak: Under the Skin, where she played an alien body lacking a soul and Her, where as a sentient OS she portrayed a soul lacking a body. She does good work with her character’s void, and while it doesn’t quite make up for the abandonment of an over-active brain, the film has stronger foundations and feels smarter with her present.

And yet, the elephant in the room. Yes, she makes the film work, but should it really have been her? And more importantly, should this film have even been greenlit to be made by an American studio, giving their spin on Japanese pop culture? Ghost in the Shell 2K17 is a film defined by emptiness, in contrast to both its source material and the complex social issues surrounding its existence.

The best thing you can say about Ghost in the Shell 2017 – beyond crafting nostalgia for Oshii’s original film – is that it has inspired many to speak out about Hollywood’s diversity problem. If the prospective audience stays home and Paramount Pictures learns from this experience, there will be more than a basis for the Majors and Motoko Kusanagis of the future to be played by Asian actresses – regardless as to what Oshii may think.

Tags: Ghost In The Shell