“I’m really excited to see how the world feels about this one,” insists Joey Bada$$, but he doesn’t sound sincere. It’s a few days before the release of All-Amerikkkan Bada$$, the Pro Era rapper’s second studio album and he sounds a little anxious speaking via phone from his native New York. But who can blame him? There’s pressure and expectation surrounding a sophomore project that just isn’t present with a debut.

At this stage, the kid born Jo-Vaughn Scott in East Flatbush, Brooklyn is an international star and has more eyes on him than ever before. He’s no longer simply a wide-eyed, teenage East Coast revivalist, and has recently repositioned himself, emphasizing a sharper, socially conscious edge. Bada$$ has grown; hip-hop expects, and he appears to know it.

But there’s no sign of trepidation on All-Amerikkkan Bada$$, a record the rapper calls “the album I’m supposed to make right now.” Building on the promise of his breakout mixtape 1999 and debut album proper B.4.DA.$$, the album is packed with slick beats and a sense of invention that attempts to correct the assumption that Bada$$ is nothing more than a ‘90s throwback figure.

“Ever since I was a kid I’ve always been one to vocalize my thoughts. Now I feel like it’s my responsibility to,” he says. He’s referring to lines like, “We ain’t got no-one to trust / Time is running up, feel the burn in my gut / And if you got the guts, scream, ‘Fuck Donald Trump!’” on ‘Rockabye Baby’ or “Some people enslaved by they religion / Can’t emancipate the fundamental prisons,” on ‘Temptation’. The album’s lead single ‘Land of the Free’, meanwhile, was dropped on the day of the President’s election, and describes a black population “left dead in the street to be the organ donors” with fiery contempt. “It’s both timely and timeless,” he assures.

The Joey Bada$$ who blazed to fame with boom-bap beats and verses for Kendrick Lamar and Danny Brown is all but gone, but a lot has changed since then. In 2012, Barack Obama had just begun a second term, the wave of revolutionary action in the Arab world changed the way social media was perceived and Trayvon Martin’s murder had reignited an important dialog about race in America.

In 2016, Bada$$ sports a more sophisticated worldview and is quick to draw attention to the fact that his music has progressed significantly. “The musicality is going to be the first thing you notice about this project. The sound and the vibe has matured,” he says. “As artists we want to be artistic, we don’t feel any growth if we’re repeating the same shit that we’ve done before and that’s what people don’t get – the artist’s struggle.” Which is why it has been important to him to have more autonomy than ever before on All-Amerikkkan Bada$$. “Previously on all of my other projects, I was just rapping to beats if you will. Doing a little post-production after,” he states. “But on this one I brought producers together and we pretty much made everything from scratch.”

“I always grow as an artist, but on this one I felt it visibly, physically and internally. Not only did I create it different but the subject matter is pretty much in line throughout the whole project.” It’s true – the album’s political message is visible everywhere, from its title (a nod to Bada$$’s late best friend Capital Steez’s Amerikkkan Korruption mixtapes) to its cover artwork – a vivid picture of the rapper riding in a beat-up car with a paisley-printed American flag on the hood. 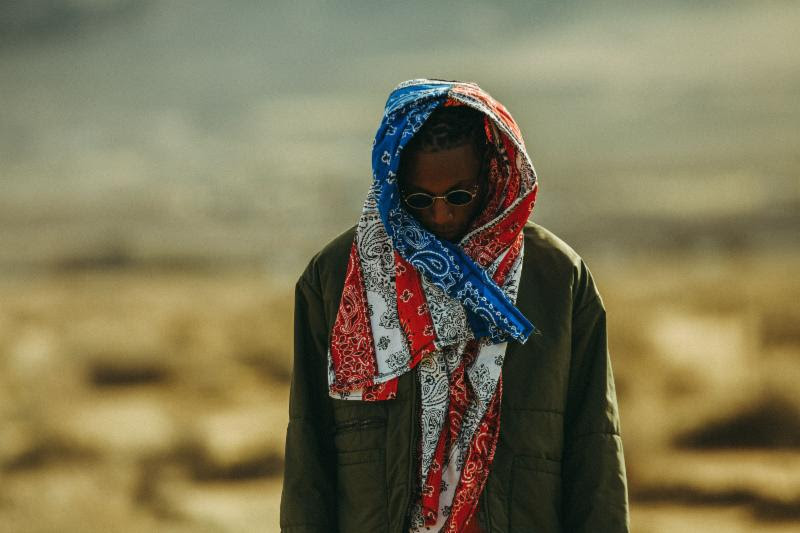 It’s a loaded image, the combination of paisley, reds and blues intended to suggest a world in which Bloods and Crips might come together. “My whole idea with the paisley flag was to promote unity and a feel of what’s to come,” he says. If there could be unity among deadly rivals on the fringes of society, what kind of impact would that have on the world we live in? It’s a powerful thought.

The funny thing about All-Amerikkkan Bada$$ is that it wasn’t intended to be a necessarily political album. But it arrives at time where politics has become an unavoidable part of existence as a black man in Trump’s America. “This album is really about my experience as an African American in the United States and my domestic relationship with the country,” he explains soberly. “At the same time it’s not about my particular experience, it’s about the experience, if that makes any sense.”

In 2015, Bada$$ addressed these issues, zeroing in on police brutality against black people in the video to ‘Like This’. But he’s reluctant to be boxed in as a political rapper. “I’m not a politician and nor am I trying to get into politics. This has less to do with politics and more to do with social things and humanity,” he says. “For me it downgrades that term because who the fuck wants to listen to political rap like what you’ve heard before? People always wanna put shit in a box. Honestly, people calling this shit political rap affects me the same way people were calling my first records ‘90s boom bap – just stop putting my music in a box.”

But the ghosts of the ‘90s golden age are never far away. In March, Bada$$ sent the rap community into a frenzy after stating that he was a better rapper than Tupac. “I already know I’m a better rapper than Tupac. That’s just facts,” he said to Genius, half-joking. “In a one-on-one battle, I’ll flame ’Pac.” And while that suggestion wasn’t well received by self-appointed Real Rap Fans, it does reveal a lot about Bada$$’s level of ambition. “I make music because I wanna be in your top five artists of all time,” he assures. “This is bigger than rap for me. I’m not trying to be one of the best New York rappers, I’m trying to speak to the world.”

Bada$$ feels able to make this happen by letting go of the future and remaining in the present, something he’s learned recently. “Internally, I must let go of my dreams,” he says when I ask about his plans. “The law of detachment is real. If you’re worrying about something and holding onto it, it may never happen. But if you let go… you just never know.”

I wonder if Bada$$ plans to explore more on-screen roles. Acting has always been another creative passion for the rapper, who studied theater at Brooklyn’s Edward R. Murrow High School as a teenager. In the run up to All-Amerikkkan Bada$$, he starred in season two of the Emmy-winning US TV series Mr. Robot, playing the character Leon, who builds a friendship with Rami Malek’s Elliot Anderson. But despite acclaim for the role, Bada$$ is meditative on his expanding success. “Music is my number one thing but acting will always be there for me. It’s all a part of the growth,” he says. “Everything happens when it’s supposed to. I’m living in the now.”

This is a far cry from the Joey Bada$$ we heard on 1999 rapping about hoping to meet Jay Z (‘Waves’). Five years later, All-Amerikkkan Bada$$ could be his magnum opus – whisper it, his All Eyez On Me. Sure, he’s excited to see how the world feels about this one. But really, it’s all about growth. “Before all the fans, it was just you judging your art,” he says. “It’ll start with just you and end with just you.”