Aphex Twin: 10 strange myths and the truth behind them

There are few artists with as many strange urban legends around them as Aphex Twin. But which myths are real, which ones are false and where did they come from? Here’s everything you need to know.

In delving through the discography of Richard D. James to come up with the top Aphex Twin tracks of all time, the FACT staff revisited old favorites, unearthed forgotten treasures, and — like the video for ‘Come To Daddy’ — ran around causing mayhem as if James’ face was our own.

But spending that much time in the head of such a gifted, maddening, and singular artist will have its side effects — like not being able to decipher which parts of James’ self- and fan-created mythology are true.

Is Aphex Twin some sort of warped Dr. Seuss character — a former child prodigy who lives in a bank and drives a tank, pulling melodies and rhythms from lucid dreams — or an impish musician who gets his kicks by coloring outside of the lines and taking the piss out of the press? Here are ten of the more persistent tall tales about the Twin, and in the immortal words of the Fox News Channel: we report, you decide.

Before he was Aphex Twin, he was a prodigy

The title of Selected Ambient Works 85-92 suggests that the earliest Aphex Twin material was first drafted when Richard James was just 14 years old. Considering the album’s legendary status and continued influence over electronic music, that might be a tough pill to swallow, but Benjamin Middleton (brother of Tom) claims that he saw James producing music in his Cornwall bedroom at age 12.

Plus, there are countless stories of his building circuits and synthesizers from scratch during his teens which he would use at his early DJ gigs. In an age where easy access to sequencing and recording software has taken the search for the Next Big Thing into secondary schools, this claim might not seem as outrageous as it did during the Aphex Twin hey day, but — if true — it’s impressive none the less.

James has always demonstrated an unparalleled gift for squeezing sounds (and noise) out of synthetics, and it may be a talent he’s had from a young age. In a 2001 interview, he claimed that at age 11 he won 50 pounds in a competition for writing a program that made sound on the ZX81, an early home computer without external sound. “I played around with machine code and found some codes that retuned the TV signal so that it made this really weird noise when you turned the volume up,” he said.

Unfortunately for the Aphex Twin legend, intrepid blogger Richard Lane tracked down what he believes to be the winning entry in the competition by investigating scans of decades-old computer magazines. According to Lane, the author of the program was not a pre-teenaged James, but Leamington Spa’s Garry N. Owen, who was awarded not fifty but six pounds for his entry. Some might believe this to be James’ first anagram-based pseudonym (Angry Owner? Yearn Wrong?), but we prefer to use Occam’s razor when debunking this one.

The significance of the Aphex “Twin”

While it was initially speculated that Tom Middleton (who co-produced early Aphex track ‘En Trance To Exit’ under the name Schizophrenia) was the “twin” in Aphex Twin, the moniker allegedly has a more personal — and devastating — origin. James has maintained that his brother, three years older and also named Richard, was stillborn. 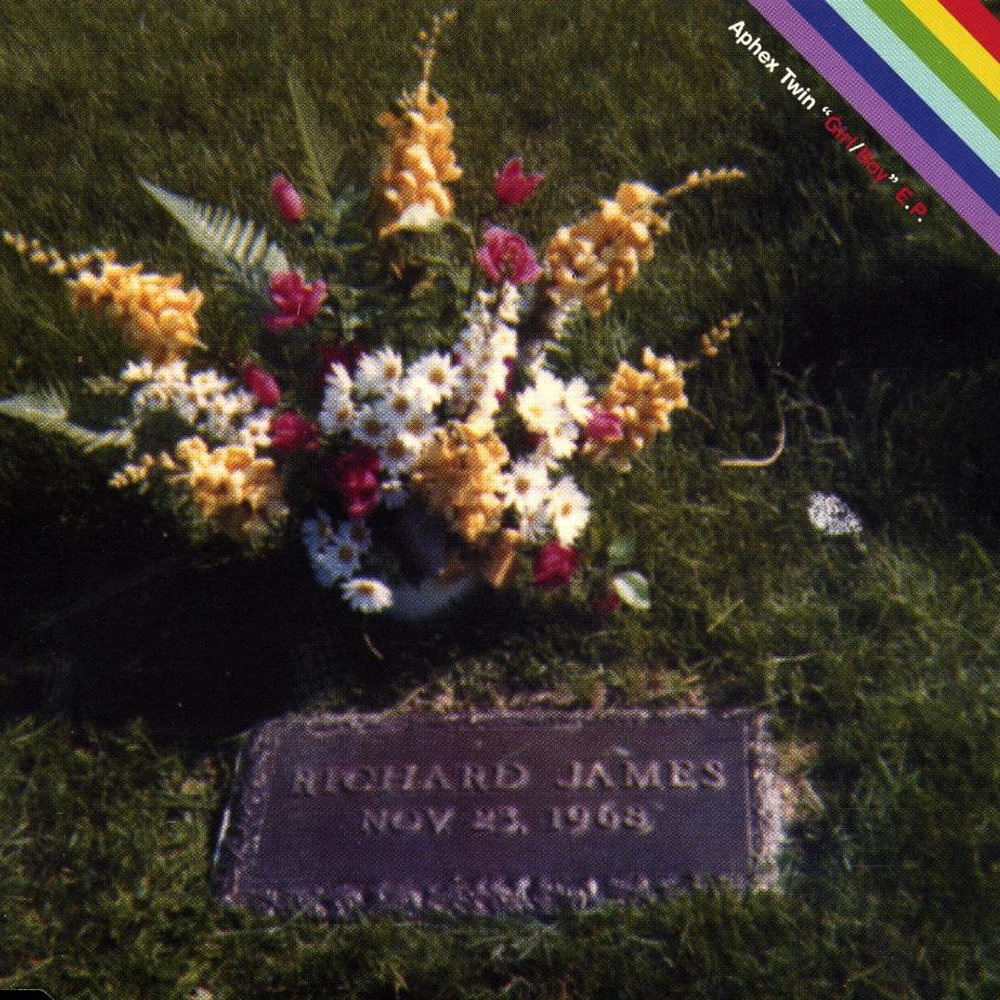 “My mum was so upset about it when he died that she kept his name on but forgot about him, thinking ‘The next boy I have, that’ll be him,’” James said in a 1996 interview. “So I sort of took his place as if he didn’t exist.” A photo purporting to be his brother’s gravestone (right, allegedly taken at an unknown location in Canada) was used as the cover for the Girl/Boy EP, but the entire tale has such an air of macabre humor that it could as easily be fiction.

I must be (lucid) dreaming

Lucid dreaming is the act of being aware of and controlling your dreams, and it’s a technique James claims to be responsible for 80% of the tracks of Selected Ambient Works Volume II. In a 1994 interview he explained, “I go to sleep, dream I’m in my studio with imaginary bits of gear and do a track. Then I wake myself up and recreate it. I can do this in about 20 minutes.”

He went on to say that he realized he had the ability when he was “about 7” but said it took “six months of practice” to actually start remembering melodies. James mentioned the technique in a number of interviews at the time, notably contributing to a now notorious 1995 feature in The Wire, but whether it’s absolute cobblers or not is difficult to prove. The technique itself is somewhat established, but whether he really applied it to the album itself is another thing altogether. It sounds feasible enough listening to the tracks like ‘Domino’ and ‘Grey Stripe’, but when you read his comments in Loaded magazine (“Yeah, I used to go to bed jus to write songs, but now I just sleep and occasionally wake up with a new one by mistake. At the moment I’m getting into inventing things in my sleep instead”) there’s a sense that there’s more than just a whiff of bullshit.

In 1994 James was invited to play at London club Disobey, and since he was a regular (“I’d go down there to see all the weird and wonderful acts they’d have on”) he figured he’d take them up on the offer, even though he “couldn’t really play any records.” Instead of spinning wax, he just “played some sandpaper” and predictably enough, people loved it. Things got more interesting when he performed the same set in New York City at a Blast First showcase, and added a food mixer to setup. “I just mixed some sandpaper together for a bit and then played a food mixer and threw it at someone,” he says in a 1997 interview, “I hit the bloke on the head, and I thought I would get sued for that, but he wanted me to sign it afterward. He said, ‘I will keep this food mixer forever.'”

Apparently there’s still enough interest in this legendary set to garner a massive $232.50 bid on Ebay for a piece of sandpaper stamped with an Aphex Twin logo, which may or may not even be official (rumours that it was pressed in 1994 are unconfirmed) – there’s one born every minute, clearly.

He bought a tank…

It’s easy to spot where this rumour came from: Richard D. James doesn’t exactly own a tank, but he owns something very similar — a Daimler Ferret Mark 3 Armoured Scout Car to be exact. Armed with a mounted machine gun and a welded steel body, it’s easy to see how it was confused for a tank, and James has relished telling reporters all about it over the years. In one particular 1995 piece for Details Magazine, James explains his fascination with the vehicle, noting that it “pisses all over virtual reality or any computer game I’ve ever played.” 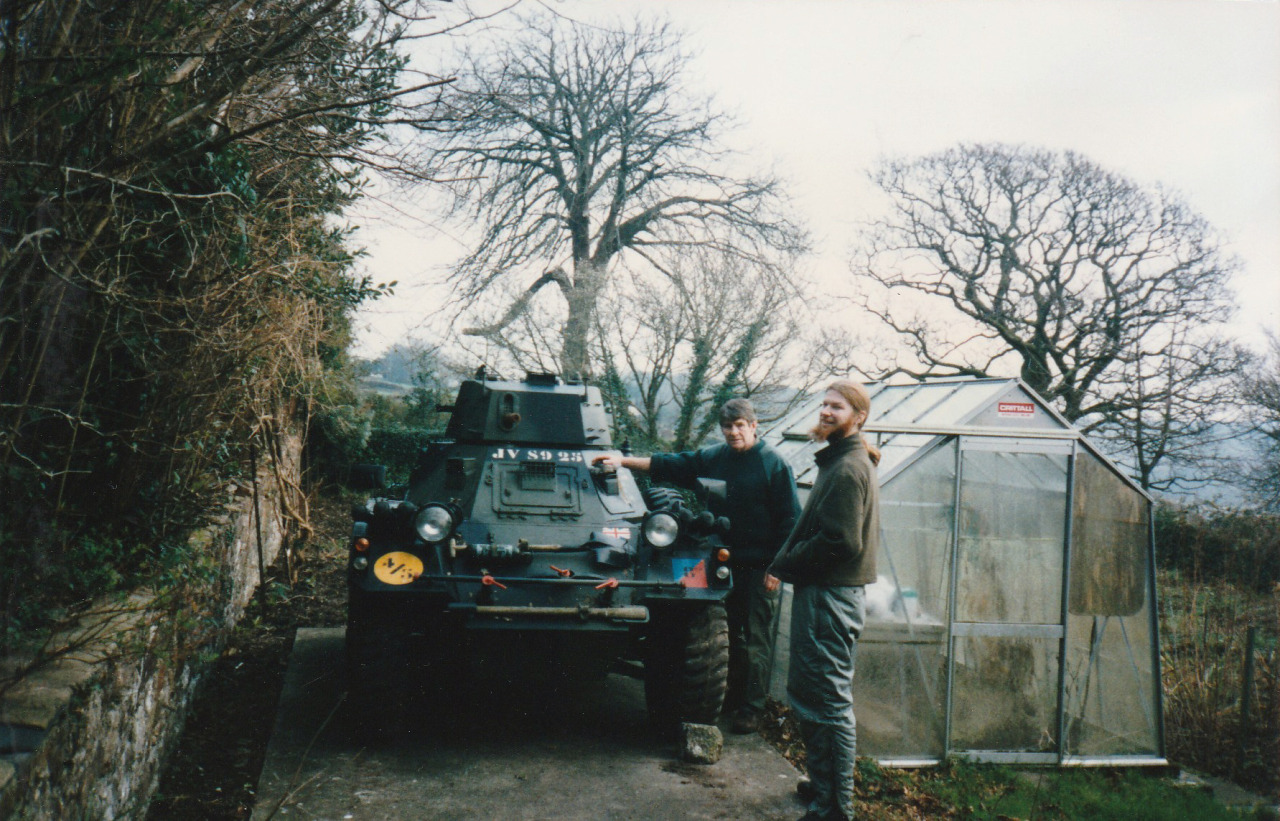 Clocking in at over 9,500 lbs and “larger than an ice cream truck” it’s a big toy that according to James is harder to control than the mixing board in his studio. James does admit though, that after getting to grips with its problematic steering it can be a pretty safe place to hide: “It’s like a womb… with a gun.”

…and lived in a bank

James bought a now-demolished former bank in Elephant & Castle (opposite Ministry of Sound) some time around the recording of the Come To Daddy EP, and figured that its “four-foot thick walls” would be good sound dampeners, as well as a natural deterrent for burglars. He also felt that he “wanted the karma of living in a place where money comes in all the time,” which doesn’t make any sense at all. Still, telling people that he lives in a bank vault has been a long-term weirdo calling card for James, so its purpose has probably been well served.

Contrary to popular opinion however, the building in question is not the odd, box-like structure in the middle of the Elephant & Castle roundabout. That building is in fact the Michael Faraday Memorial, which houses a London Underground electrical sub-station.

We are the music makers

James has made it pretty clear over the years that his custom gear has been pretty important to his singular sound, but it seems to have been down to necessity rather than a specific desire to make something customized. Talking to Junglizt in 1996 he said, “When I bought my first synthesizer I really didn’t like it, l thought it was a piece of shit and I really didn’t have any money to buy anything better so I had to go about tweaking it. I just started with basic alterations, but as the years went by the alterations got bigger and bigger.”

By the time we get to 1997, James had moved on, saying he felt as if he was “just someone who is fucking around in a bedroom on the computer,” but did say he was “totally into the idea of making my own programs for my own music,” which does suggest a similar creative urge regardless of the exact platform.

“I admit that sometimes I don’t put any work into remixing at all.” From a man who flippantly named a collection of remixes 26 Mixes For Cash, the statement isn’t surprising. What is surprising is the extremes to which James would (allegedly) take this operating principle.

As legend holds, he was commissioned to remix alt-rockers The Lemonheads, but when the courier came for the tape, he had nothing to turn in; he either didn’t listen to the original or “couldn’t be bothered to do their track ’cause it was so shit.” Instead, he grabbed an old track, handed it over, and was paid four grand for his work. “Strangely, they never released it,” he told Loaded (which makes confirming this one particularly difficult). “They should’ve been honoured, I reckon. It would have sounded better than any rubbish song they wrote.”

Aphex Twin is playing at my house

Richard James is nothing if not a populist. In a 2001 interview, he claimed that no venue or event was too small for an Aphex Twin performance, provided it was in London and he had the time. “Yeah, I played in people’s houses. Last month I got an email from a guy who said: ‘My grandma died and she left me lots of money.’ We thought, that sounds cool, and drove to the place with a huge tour bus.”

“Those are my favorite gigs: a mixture of friends and people from the street,” he continued. “Soon I am going to play at a wedding and just recently a girl asked me if I would play Gabba at her party ’cause she finished her exams in history of art. I said: ‘Yeah, definitely!”. As long as it’s in London and I got time for stuff like that, I like doing it.” Imagine: ‘Girl/Boy Song’ as the first dance at your wedding, with RDJ behind the decks.

Read next: How the caustic, fucked-up noise of Aphex Twin turned my teenage world inside out