Coachella 2017 review: An escapist experience whether you like Migos, Hans Zimmer or both

Coachella has grown from oddball desert getaway to one of the world’s biggest weekenders. Veteran FACT contributor and DJ Tamara Palmer finds out what it’s like to go to the festival in 2017 after being there for its inception.

The last time I went to Coachella, I was 27, the age that rock legends typically start dropping dead — or, at least, out of the party. This past weekend, I returned as a 43-year-old DJ to spin at the festival campgrounds’ lively Coachella Art Studios (aka #Craftchella) while people illustrated sexy male models, created original wood block art and made music shakers, among other fun and free activities.

I was asked to spin a thematic four-hour set of all-female songs, an invitation that gave me enough incentive to finally make the leap to Serato from vinyl after 24 years of DJing with records; I’d rather not haul that much vinyl to the desert. It occurred to me that this was not an option for DJs when I last attended the fest. But a generation later, digital DJing is the standard way anyone learns and performs.

Still, a background in the original, foundational format provides a secret weapon of musicality and technical ability, as we unequivocally heard from veteran DJs like Detroit’s holy trinity of Derrick May, Juan Atkins and Kevin Saunderson, who performed together last weekend as the Belleville Three. (They all, respectively, performed at Coachella’s inaugural outing.) The tide has turned in favor of electronic artists at Coachella and other festivals over the years – just look at the lineup – but they still put these legends on at 3:30 in the afternoon.

The tide has turned in favor of electronic artists at Coachella and other festivals over the years, but they still put these legends on at 3:30 in the afternoon

I had been warned about how much Coachella has changed since its first few years, both in terms of scope and demographic. I knew celebrities had long ago invaded and made it a place to be seen, instead of hear, and that neon tank top bros had followed suit. This year’s festival expanded in size by 20 acres and jumped in capacity from 99,000 to 125,000, according to the LA Times. That’s more than three times the size since my last visit in 2001, and it now takes place over two consecutive weekends, of course, so that many more people will be on the fields again in a few days.

Coachella’s first year came after the rape and riots reported at Woodstock’s 1999 reunion, so the heir to the hippie throne was more than free by the time it set up shop at the Empire Polo Club in Indio. Variety reported that the first day was only at half capacity and the second day sold out, but overall the festival drew attendees from 40 different states. The second festival didn’t follow until 2001, giving promoter Goldenvoice the chance to bounce back from losing money in 1999.

I think I may have considered going barefoot momentarily on the grass the first year as I roamed the two stages and three tents, but I was audibly aghast at anyone who does it now, when there are exponentially more people and potential hazards. I didn’t care what I was wearing then. Now, Coachella style is very much a thing. There’s a stereotypical look, easily replicated by the festival’s official H&M collab.

I saw lots of people attempt what they cringingly call boho, but I was also relieved to see only very few flower crowns (noting with pleasure a red rose crown on a large black man) and more individual expression. I even saw a tattoo of California on a very fake boob and I let my own girls out in view more than they usually are for any reason ever. I was relieved that I never felt leered at or objectified. These style clichés may be a touchstone of Coachella chatter outside of the festival, but I would have never known I’d feel so comfortable with my skin out if I hadn’t attended this year.

Coachella also now even has its own palette of medical ailments to contend with in the dry desert heat. “Oh, you have Coachella lung,” said a friend when he heard me cough up the dust and grass vapor we were enduring on the last day in order to catch some of Kaytranada’s upbeat show. To me it sounded like Coachellung, who could have been an experimental Krautrock act straight from Munich. He referred me to a recent article LA Weekly had published offering advice from a doctor who travels out to the area each year to provide intravenous rehydration services to people who party a bit too much during the festival.

At a festival that is about diversity and discovery of acts, nothing was more amusing to me all weekend than the frequent appearance of Atlanta rap trio Migos, who performed their song ‘Bad and Boujee’ during no less than four different onstage guest appearances over the weekend. Besides having a personal soft spot for them, it showed that this is a festival where hip-hop is being heard and reflected beyond a hologram.

I even screamed out for that silly Migos song during film composer Hans Zimmer’s exquisite set, which included a vocal performance from the real Lion King, a cameo from Pharrell and an uplifting story about immigrants working together in America to achieve greatness that was one of the weekend’s subtle yet effectively communicated nods to the freak horror show that is happening in the country and world right now. Having the privilege to attend an escapist festival where Migos and Hans Zimmer could share space and enthusiasm in a multi-generational and largely respectful crowd during this time of psychological torture means a lot to this old lady, who has already been invited to DJ again next year. Can DJ Khaled say the same?

Read next: The Chemical Brothers’ Dig Your Own Hole is still a rollercoaster of block rockin’ beats 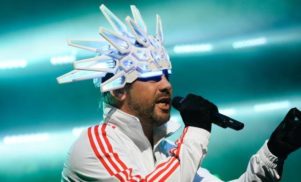