How the hell did this EDM festival trailer calling out sexist culture go so wrong?

A bizarre trailer for HARD Summer 2017 festival debuted online this week claiming to satirize industry sexism, but has been accused of perpetuating misogyny rather than skewering it. Claire Lobenfeld speaks to its director to find out how the controversial video’s intended message went so awry.

HARD Fest, a series of EDM parties and weekenders including cruise Holy Ship, have come under fire after the release of a trailer for 2017 HARD Summer. The clip intended to highlight gender discrimination in the music industry, but has been met with criticisms calling it “unfunny” and accusing its approach of hiting a little bit too close to home to be seen as parody.

Here’s a quick synopsis: HARD founder Gary Richards haggles with a Tom-Cruise-in-Tropic–Thunder-looking manager named Harvey to get more women on the HARD Summer lineup. With DJ Snake and a handful of other DudeJs in his office, Harvey concocts GRL PWR, an all-female DJ crew comprised of these male EDM DJs with plastic fake boobs attached to their bodies. The trailer’s director, Swedish-Polish filmmaker Agata Alexander, says her intentions were to have the viewers see that DJ Snake and other festival headliners were no longer taken seriously once they were given boobs, highlighting specific discrimination she’s experienced herself through the lens of male bodies.

The HARD Fest trailers are something fans have come to expect. They usually star EDM bona fides like Tommy Trash or Diplo and Skrillex, who appeared in the 2014 HARD Summer trailer as the “Strawberry Gang” alongside Dillon Francis and A-Trak. These trailers are a thing for HARD Fest fans, but the clip for HARD Summer 2017 has found a new audience: people who perceive it as a failed attempt to comment on sexism in the electronic music.

Part of her inspiration for the video is the dearth of women performers on the lineups at most festivals: “Last year’s HARD Summer music festival only featured five female performers. This year’s edition features 25,” the press release for the trailer states. Alexander was instrumental in influencing Richards to dig deeper for artists to book. A statement from Alexander in the press release starts:

“I spoke to Gary about getting more females on the lineup. He, his team at HARD and I started to put together lists of women we could get for the show but it felt so predictable – a token gesture to have one or two big female headliners. Why did we have such a hard time figuring out who to get other than that? Gary started digging deeper and I really respect him for this. He called me and was like ‘Yo, I’m finding so many dope chicks I’ve never even heard of. This is so cool.’ So that became our purpose. Giving the female underdogs a chance which brought us Madam X, Kittens, GG Magree, Cray, Jubilee, J.Worra, Uniqqu3 [sic] and others.”

These trailers are a thing for HARD Fest fans, but this clip for HARD Summer 2017 has found a new audience: people who perceive it as a failed attempt to comment on sexism.

It is troubling that the purveyors of such a successful festival brand are so in the dark about just how many women are making electronic music, just as it’s troubling there remains the need in 2017 for collectives like Discwoman working to ameliorate these disparities across the entire festival landscape Still, the lineup is stacked, also including Anna Lunoe (who just played Coachella super pregnant), Tinashe, Nina Las Vegas, Charli XCX, Uffie, Kim Ann Foxman, Louisahhh and Nancy Whang. It is a diverse array of women, spanning a wide range of genres. But there was not really need for HARD to wave a flag highlighting their efforts to book more women. The sheer number on the lineup spoke for itself.

The HARD Summer line up is a mic drop for every myopic troglodyte that said festivals can’t have equality bc not enough women artists exist pic.twitter.com/Z5UKnHDTMF

Except Alexander doesn’t see names on a flyer as bold enough resistance and so she made the trailer with the intention to “hold a mirror up to the music industry” and reveal the sexism lived every day. “As a female in a male-dominated industry, I have dealt with every single thing that happens in this video,” she tells FACT. “The joke where Anna Lunoe is mistaken for a makeup artist? That is a real thing that’s happened to me. The questions about sexual favors to get ahead in life? Absolutely, that has happened to me. Being sexualized because I wear cleavage to a meeting? That has happened to me. These are all real things. It’s great that Gary found all those newcomers and he’s making an effort to put them on the bill, that’s awesome, but this is a reality check. Let’s make a difference here because this is screwed up.”

Many did not see the trailer from Alexander’s perspective. Annie Mac called it “depressing” and “indicative of the state of the industry right now: still so unbalanced. Still lacking females in the top tiers.” The Black Madonna unleashed a pair of tweet-critiques presumably about the trailer, as well. (She referred to them as subtweets.)

Crazy idea. Just book women without breaking your own arm patting yourself on the back about it.

Or making competent women choose between patronizing promotional schemes and getting paid to do what they do as well as men.

Producer/DJ and editor Dani Deahl wrote over at NYLON: “The players in this unfortunate video aren’t here to empathize or walk in a woman’s shoes. Putting comedically large, or sagging, or pushed-up prosthetic breasts on men who are acting out a script, with other men, in a safe space, is not satirical. It’s a mockery that whittles us down to our sexual parts.”

Deahl’s comment that the video whittles women down to body parts is valid. So when Alexander asks me what I personally thought of the video, I tell her that I think it would have been more effective if she had changed the body part – if she crafted a world where men didn’t have to adopt women’s body parts to be objectified, but if they had to put themselves in women’s shoes with their own bodies.

For Alexander, that was exactly the point. “As a woman, you are boobs,” she tells FACT over the phone. “Having tits, whether they are ones you were born with, ones you should have been born with, or the ones you choose to have, they strip you of your personality and humanity. You are nothing than just a pair of tits in a lot of men’s eyes in the music industry. For me, it was very important to put the men in that position, where you become a sexualized object and, for me, that’s boobs.”

In an interview with NEST HQ, Alexander said she was trying to “trick [EDM bros] into thinking feminism is cool.” She adds: “I’m trying to mind-fuck them, they see their bro DJ Snake put on boobs and they’re laughing but not realizing what it is they’re liking. Maybe someday later down the line they’ll get that their idol is telling them to support women – it’s inception. I know that’s wishful thinking but I have to think in these ways in marketing: I have to think, ‘What do these bros think?'”

I ask to explain how exactly feminism inception works and Alexander tells me, “When [my audience] sees this stuff, they laugh. But maybe two years later, they’re sitting in an office, and a woman walks in and they have a thought or they want to say something and they’re in a situation where they’re going to recognize this trailer and their behavior and they’re gonna stop themselves. That’s my wishful thinking, that somehow I will maybe plant a seed that will evoke something down the line and will stop you from being like the manager in the video.”

The trailer has been called “unfunny” and a failure at satirizing the sexism it is trying to skewer. In our interview, Alexander refers to herself as “Miss Fart Jokes”, acknowledging that her sense of humor is relatively low-brow and that the trailers are usually expected to be “light, fun and summery”. “People are used to seeing thos and I come out with something with another layer, a strong, important layer,” she says. “I don’t think people necessarily were ready for that. It’s a hard pill to swallow after all the other trailers.” 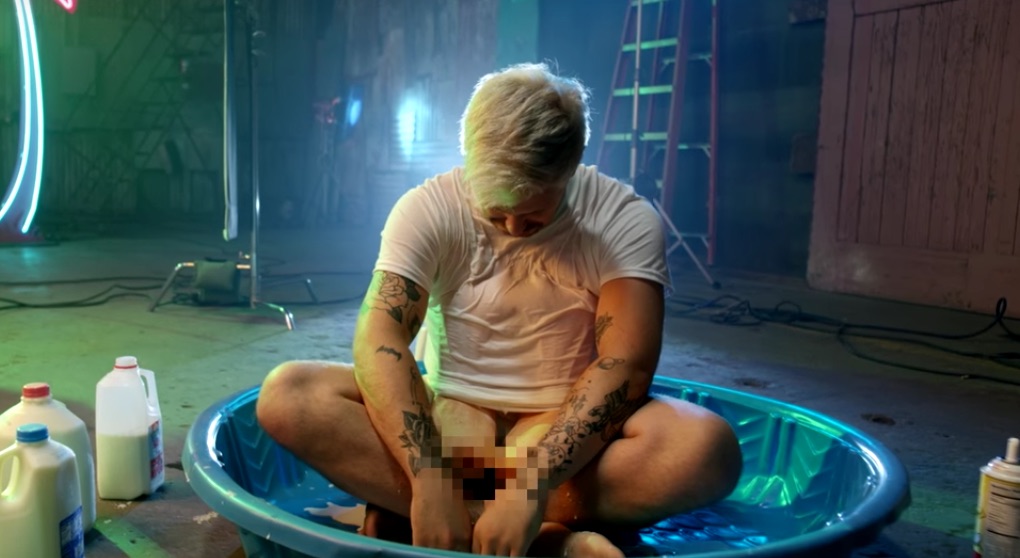 Ultimately, Alexander’s intent is not to influence people who are already aware of exploitation and gender discrimination. “It’s very important that men step up and say, ‘Hey, check this out. This is a real problem and we’re gonna be in the forefront to make a change,’” she says. “Unfortunately, we live in a world where we need men to stand up and say these things are fucked up and need to be changed. That is the reality. As a woman, you’re just screaming in the dark. That’s just how it is.” However, none of the videos co-stars have commented on the clip beyond tweeting it out to their followers. DJ Snake wrote “I wasn’t ready for this. You won’t be ready for it either” followed by many crying-laughing emojis, which undermine Alexander’s message.

Before we get off the phone, Alexander thanks me for giving her a chance to have a voice after the backlash she says she “feels in her stomach.” “I appreciate that you listened because a lot of people have not,” she says. “I made this and nobody’s listening.” Whether you agree with her approach or not, Alexander’s vision has been swallowed whole. When FACT initially reached out to HARD for comment, we were offered an interview with Alexander. When we followed up for a formal response, we were told by the publicist for HARD Fest, “We are letting Agata take this one.” Alexander’s goal to combat and highlight sexism in the music industry is very clearly sincere. HARD Fest remains dubious.

Update, May 5, 2017: A representative for HARD Fest founder Gary Richards reached out to FACT with the below statement.

“Here at HARD Events we are here for everyone. The HARD Summer trailer was created as a satirical piece to raise consciousness at a time when equality issues are of utmost importance. Our goal is to promote good
music and we are trying to give women more of a platform at our
festival.

My intentions here were only to help, not offend anyone, in supporting Agata’s vision and message. I understand that she does not speak for all women and how people could be upset by the trailer. There is always a risk of misinterpretation when satire is used, but we felt it was right to let her express herself and have creative control over the piece. We want to extend a sincere apology to those who were offended.

We hope the conversations started by this piece bring the change we intended and we will continue to be a champion for Women’s rights within our community and world at large.”