Singles Club I by April Clare Welsh, Chal Ravens and Miles Bowe I 27.03.18

This week, Chloe x Halle release their hotly anticipated debut album and we take a look at Joey Bada$$ collaboration ‘Happy Without You’, while Marilyn Manson drops (another) controversy-baiting track, ‘Tattooed In Reverse’.

Elsewhere, UK club mainstay Blawan introduces his debut album with sprawling techno stomper ‘North’, Lil Yachty teams up with Danielle “Bhad Bhabie” Bregoli for ‘Count Me In’ and country star Kacey Musgraves is back with ‘High Horse’. Let’s see how the week’s biggest singles shape up!

Miles Bowe: This isn’t the joyous, carefree Yachty that tends to deliver my favorite of his singles, but this grew on me and is solid. The fact that Lil Yachty has even reached a point where he’s not inspiring extreme hate or love in the first place is kind of nice. (5)

April Clare Welsh: This is quite catchy, but in a way that I wasn’t expecting from the Lil Yachty or Lil Boat, or Lil Jet Ski (which would be a better name imho) who fed us Teenage Emotions. I can see what he’s trying to do here and on the new mixtape in general – swap that day-glo zaniness for something *a bit* more serious, because he’s 20 now and that’s when life begins etc etc. So yeah, the bulletproof bassline on this definitely gives it a harder edge, but why oh why give Danielle “Bhad Bhabie” Bregoli a feature and undo the good work? (4)

Chal Ravens: Always got time for a rap track so basic it’s only got three notes in it. It’s like a straightforward charisma test: can you make something so basic sound interesting over three minutes? In this case, not quite – it’s only two-and-a-half, for a start, and it’s not got the playground rhyme catchiness of his other singles. Side note: the presence of Danielle “Bhad Bhabie” Bregoli is interesting because it suggests her supposedly Deeply Concerned Mom has been in on the whole stunt since the start, which is heavily dystopian but whatever. End of the world is nigh! (5) 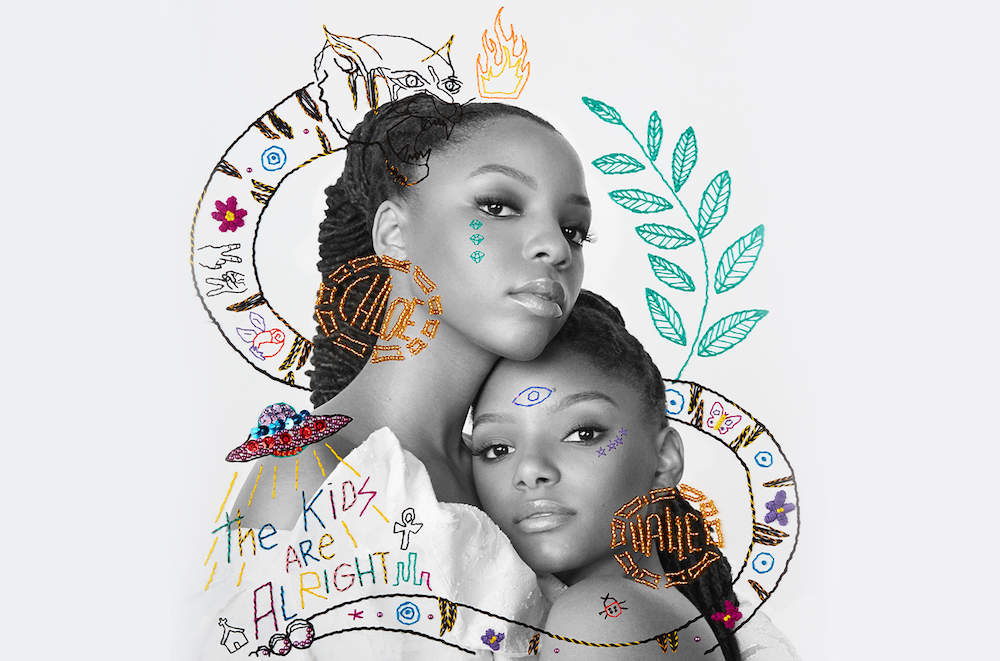 Chloe x Halle – ‘Happy Without Me’

Miles Bowe: Chloe x Halle still haven’t reached the potential they seem capable of, but they’re also teenagers, so no rush. They give a lovely performance here, delivering a bitter hook with just the right amount of sweetness. Joey Bada$$’s hook is an afterthought, but Chloe x Halle stick with you. (7)

Chal Ravens: I like the sentiment but it’s too soft for my ice-clad heart. Just stop checking his Insta Stories bbz. (4)

April Clare Welsh: This has got a really lush swing to it and I absolutely love the vocals – that spring-like falsetto run vs. the rich deep tone is enough to make your heart melt. The more you listen to it, the more the nuances became apparent – the vinyl crackle at the beginning, the soul organ, the finger-snaps; it’s layered to perfection. I’m with Chal, though, when it comes to sentiment: I respect the emotional honesty here, but this guy can fuck right off!! Block him and move onto someone waaaaay better ASAP. You’re a megastar now! (8)

Chal Ravens: Aside from the single, I’m sort of fascinated by the “bosh, job done”-ness of this album title: Wet Will Always Dry. It’s like he’s channeled the rugged, machine-made aesthetic of heavy techno through a kind of suburban British filter, and ended up with an advert for masonry paint. Anyway the track is quite bosty, as FACT’s John Twells might say, with that devolved squiggle of a lead line over vast, pummeling kicks, but structurally it’s merely linear and efficient. Hardly got the reprobate personality of his early singles, but I don’t doubt it’ll get plenty of club use. (5)

Miles Bowe: I love that insectoid buzz of a hook and the swarms of distortion. This track has very few elements and none of them sound very pleasant, but Blawan manages to squeeze something hypnotic, pleasurable and (most importantly) danceable out of it. While I agree with Chal that it misses some of the personality of his earlier singles, I’m thinking of ‘North’ as just a piece of a larger picture. I’m hoping it adds up to a debut album as strong as those early singles. (6)

April Clare Welsh: I half-saw Blawan play at Glastonbury’s Block9 last year (I was waiting in the queue for NYC Downlow) and the sort of scrambled, alien-sounding call-and-response on this reminds me of those extraterrestial times spent running around in fields finger-pointing the air. Weeeeell up for hearing this in similar grassy or sandy environs this summer and excited to finally hear Blawan’s debut album, which has been a long time coming. C u in the field. (7)

Chal Ravens: Ha ha ha. So, kids, back in the early noughties and earlier you couldn’t just “check out” a band unless you bought the record or one of your mates had bought it. (I hear some people had local libraries sorting them out but I missed that free lunch.) For whatever reason, despite there definitely being a few Marilyn Manson hoodies walking among the Papa Roaches and Linkin Parks at school, no one in my immediate circle could furnish me with a copy of Mechanical Animals or whatever MM album was out at the time. So I spent years thinking that this dude who got blamed for the Columbine massacre must be making some pretty fucked up music, like really intense, mental health-damaging stuff, before finally copping that it was just rock and roll with a subtly gnarlier finish, and way less terrifying than most nu-metal-adjacent shit of the era. POINT BEING, that I always want MM to be more, like, truly freakish and unpredictable than this – I mean, Lil Peep is definitely more terrifying, from a parenting perspective. The first line in this is literally “fuck your Bible”, which feels pretty quaint for the current era. It’s OK, though. (4)

Miles Bowe: The video gets a (3) for lazy choreography, Manson’s honestly still-great mugging for the camera gets a (7), the McDonald’s commercial I had to watch before gets a (9) and this song — an unholy, humorless union of Kid Rock and Faith No More — gets a (10)…IN REVERSE. (1)

April Clare Welsh: Marilyn Manson was responsible for some of my boldest teen fashion statements, including the Morticia Adams-style see-through cobweb dress I proudly wore during my summer family holiday to Sardinia, the fishnet tights I used to wear on my arms as sleeves (although they were also Courtney Love-inspired), and the steel toecapped-boots that I thankfully could never afford. I owned all of the MM albums (on CD, ofc), as well as a tee and a hoody – so it’s safe to say I loved the band’s music and thought MM himself was pretty iconic at the time. Fast forward 15 years and he’s never felt more lame. Or maybe I’ve just grown up. (1)

Chal Ravens:  Obviously was bracing myself for country-pop and wondering how I was going to offer any context whatsoever, but this is… not what I expected. The top YouTube comment gets it right: “Wow, totally wasn’t expecting Ranch Access Memories from her.” It’s a good comparison: the just-about-country tune gains the breeziness of ‘Get Lucky’ and a heavy studio sheen. There’s even a banjo at the end, but it fits right in like Nile Rodgers doing a some gentle disco chuckin’ on his Strat. I… would listen to this. (6)

April Clare Welsh: Oh noooo!! Kacey’s gone all Katy Perry-does-disco on us. I love (some) country music so this really is a crying shame. (2)

Miles Bowe: I don’t follow country music, but I’ve been a fan of Kacey Musgraves since seeing her play an afternoon set at a music festival half a decade ago. Musgrave’s personality, songwriting and incredible voice turned a “killing time” set into one of the highlights of the weekend. This feels like her first real attempt at a pop music crossover and it’s phenomenal. It’s a song that genuinely meets the two most popular, but also misaligned, genres of music right in the middle and makes something that succeeds at both. It’s a rare and special thing. (9)