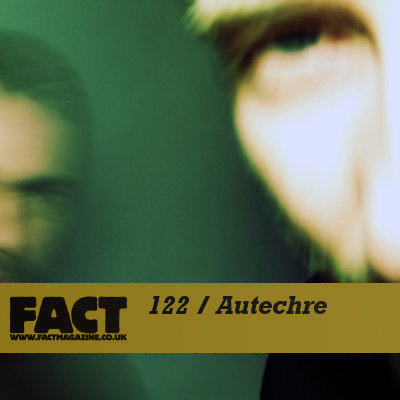 Autechre have recorded our 122nd exclusive FACT mix. Autechre. Do we really need to explain who they are?

For those who need reminding: Rob Brown and Sean Booth are among electronic music’s most important yet elusive characters, two b-boys from the north-west of England who have been stretching their formative loves – hip-hop, electro and early house music – into ever more abstract and otherworldly climes, beginning with the 1991 single ‘Cavity Job’.

The duo joined the Warp Records family in ’92, contributing two show-stealing tracks to  the label’s seminal “electronic listening music” compilation, Artificial Intelligence, before delivering their own shockingly original debut full-length, Incunabula. That album took familiar dance music tropes – breaks derived from electro, gloopy synth textures from Chicago acid – and modelled them into totally fresh configurations, adding a very British industrial burnish and post-rave melancholy to the mix. If the three albums that came next – the masterful Amber (1994), Tri Repetae (1995) and Chiastic Slide (1997) – found the group evolving at a steady pace, ’98’s LP5 and 2001’s Confield represented a quantum leap. Autechre’s music by this point had become more akin to sound-art, a (paradoxically) busy electronic minimalism that took the deconstruction of the breakbeat to vociferously scientific extremes.

It’s true that much of Autechre’s noughties work alienated those drawn to the broader techno-romanticism of their early records, with Draft 7.30 (2003) and Untilted (2005) scaring many off for good, but their most recent full-length – 2008’s Quaristice – was almost unanimously acclaimed, and deservedly so. Sure, it was still an intimidating work, but one of often great beauty and three-dimensional complexity, the kind of album you could listen to for years and never fully fathom. It was as if the future had almost – but not quite – caught up with Autechre. Next month, March 22 to be precise, Quaristice‘s eagerly awaited follow-up, Oversteps, is due to be released through Warp, and early whispers are already proclaiming it to be among the very best of Autechre’s career.

Of course, there’s more to Autechre than their albums – a vast array of singles, EPs, remixes and collaborative projects that fill in the gaps in the narrative. In 2003 they curated the fourth edition of ATP, selecting the best line-up in the festival’s history: Anthony ‘Shake’ Shakir, Public Enemy, Jim O’Rourke, Coil, Bernard Parmegiani, LFO, The Fall, Sunn O))) were among the artists who performed. As a live entity themselves, Autechre are one of the most intense and transporting you will ever encounter; it’s face-to-face, in the flesh, that their sound really comes alive.

To coincide with the release of Oversteps, Autechre are embarking on a tour that culminates with a headline performance at the 2010 Bloc Weekend, taking place at Butlin’s in Minehead, UK on March 12-14. You ought to be there.

And so here it is. Autechre’s FACT mix. Rob and Sean – who we interviewed in-depth in 2008 – have declined to talk about the mix itself, telling us that “it’s just some tunes [they] like”. No tracklist either, so spotters, please do you worst. What we can tell you is that the mix is an unpredictable, kaleidoscopic affair, rooted in sinuous leftfield hip-hop but with bursts of tremulous ambient electronics, techno, hectic breakbeats and, at one particularly memorable point, metal. We needn’t tell you how rare recorded DJ-mixes from Autechre are, so please, don’t sleep on this.