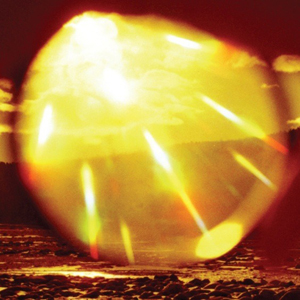 As its title would suggest, Night Gallery, a 40 minute collaboration between psyche group Eternal Tapestry and Cameron ‘Sun Araw’ Stallones takes the listener through a series of after hours images gliding from one idea to the next. The fine line between sludgy pastoral riffing and “bogged down” is just about negotiated as the record explores territory novel to both acts.

Thick guitars dominate the opening moments of ‘Night Gallery I’: layers of sound throbbing, sweeping and picking to construct a raucous polyphony. With increasingly frequent attack from the scratching lead guitar and a graduating “wah” from another, the track becomes stretched out until the slower, more rugged lower end sounds – organ and bass – bring a heaviness that causes everything to stagnate a little. Every forward motion seems like a task of Fitzcaraldo-esque proportions, as if the weight of the music is too great a burden to bear; a jam ceasing up under the heavy cross the two parties have build for themselves. Overall, the track bears greater resemblance to Eternal Tapestry than Sun Araw, with its slow arching builds, loose structures and atonal layering, but with the added parts – where there would normally be oodles of space floating around the guitars, drums and woodwind – the sound becomes congested with instrumentation.

‘Night Gallery II’ pulls the record out of the doldrums with a snappier tempo and a motivating drum break. Two guitars, instead of avoiding the other by occupying polar space, both fight for punchy post-punk territory, lifting proceedings immeasurably so that when the track begins to settle there’s enough momentum to see it through. The vocals, when they break, are an echo-y mutter – more textural implement than lyrical device – and at their peak, we hear the neo-mysticism Stallones start to encircle the record.

The tracks begin to adopt a greater flow as ‘Night Gallery II’ moves into ‘Night Gallery III’ (are you detecting a theme here?), maintaining the rhythm while baptising it in reverb. Finally, ‘Night Gallery IV’ opens with gentle crackling, gently shifting through the gears until the sound of electric organ warming up preempts a monstrous jam. Taking the length of a pop song to bring the drums in, the track begins to construct a blacker than black aura, weaved out of a Biblical baseline that churns at an intimidatingly slow rate. A myriad of parts blossom: string parts scratching in the background, guitars pattering in the fore, as the track develops into an ultimate slow-burner, showing restraint until the dying seconds.

If anything comes as a surprise on this record it’s how much play goes into laying the parts on thick. Awkwardly, the groups find greater currency distancing themselves from the flora and fauna free-psych which Eternal Tapestry peddled so brilliantly on this year’s Beyond The 4th Door. It’s an unease which runs through the record as difficult dialogue, only countered by its ebullient use of dissonance.