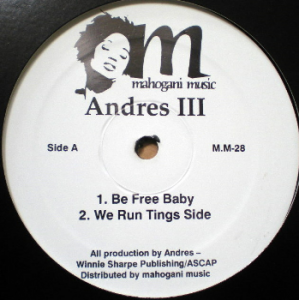 Andres’ II has to be one of the most overlooked albums of the last five years. A member of Theo Parrish’s Rotating Assembly collective, Andres has been releasing solo singles since 1997, mostly for Moodymann’s labels: first KDJ, then Mahogani Music. I’m not gonna pretend I was up on him from those days, though I should have been – in 2001, he became DJ for legendary Detroit hip-hop group Slum Village, introduced to the crew by a certain J Dilla, just before he quit the group.

No, it was II – released in 2009, and a belated follow-up to his self-titled debut album from 2003 – when I caught the Andres bug. The appeal with his music is simple, and it’s that it seems to be a completely pure reflection of him as a person. It reflects where he stands in music – a middle-man of sorts between Dilla and Parrish; Moodymann and Phat Kat; Omar-S and Black Milk, where hip-hop, soul and house are melted down into golden soul food – and it reflects the clear dedication he holds to musical history, and not just record collecting, but as he put it memorably in this interview, listening to your records. Listening to them, learning them and understanding them.

Musically, II took the roughness of Omar-S’s Side-Trakx releases, but switched that rugged psychedelic side that comes through in all of Omar’s music, hip-hop or house, for an irresistibly accessible bounce, accompanied by both sung and sampled vocals. Andres III, at this point only available as a six-track vinyl release (II’s CD edition was 30 tracks, the vinyl 11), is a similar record, but slower, with the vocals often more drawn out (but never distorted, or treated with anything less than maximum respect to the source material) to create a more longing atmosphere. Which isn’t to say Andres doesn’t have fun: for every ‘Don’t Fall In’ or ‘Make It Last’, which pair deliciously stuttered drum machine loops with plangent piano, there’s a track like ‘Outta this Earth’, which is almost virtuoso in its crashing, live-sounding drums.

Andres III is never better, however, than when it goes long-form. Opener ‘Be Free Baby’ takes up over half of the first side of the vinyl, and is the longest, housiest track on the album. It’s also the only track here that’s 4×4, but you’d never notice it for the gloriously swinging drums and ballroom vocal, as piano, trumpet and more subtly sweep the track up into a delicate frenzy. And that’s the rub with Andres III: over just six tracks, it explores such a range of moods, tempos and styles, but the effects are never less than Utopian and irresistible. Looks like he did it again.