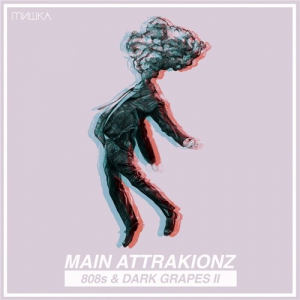 In Jack Law’s piece on Main Attrakionz from earlier this year, he talked about “cloud rap”, and how this (sort of) sub-genre applies so eloquently to the Oakland duo, who hold a penchant for beats that are “all dreamy, soft-edged cloud-chords floating on a breeze in reverb-space” and verses that drift “as if the MCs are being carried away by the breathy exhalations of the beat.”

The press release for 808s and Dark Grapes II, a new Main Attrakionz mixtape released through clothing brand Mishka, promises a chance to see “what happens when the enigmatic duo gets a chance to step beyond bedroom studios, and bring their lo-fi aesthetic into high definition”. Presumably this simply means the tape has been recorded in a studio, as the aesthetic is – mostly – what we’ve come to expect from the duo. The production is spread over a wide variety of artists, amongst them Lil B collaborators Clams Casino and Keyboard Kid and Main Attrakionz’ own Squadda B, so there’s obviously some variety, but as a rule of thumb heavy reverb, 808 kicks and rounded-off key melodies in the highs (often piano or thin, glass-like synth tones) are the name of the game here.

If you thought that the rapping would be just as floaty though, think again. There are touches of Lil B’s endearingly wide-eyed explorations of hood life on tracks like ‘Perfect Sounds’, and ‘Vegetables’ is simply bizarre, but generally the lyrics on 808s are grittier and more down to Earth than you might expect. ‘Nothin’ Gonna Change’ deals with keeping your head high in the face of frustration (“gotta have heart, gotta have faith / a little bit of patience if the game make you wait”, “life ain’t shit without that prayer in the morning”), overall sounding closer to the Clipse’s moral street code lyrics than anything you’d consider up in the clouds.

Hip-hop’s become increasingly hard to keep on top of (808s is one of at least four – probably more – Main Attrakionz releases this year, for instance), but although this release could’ve lost at least a couple of its 15 tracks, the overall quality is still far higher than the average mixtape in an age where the lack of a filter can be as annoying as it is exciting.