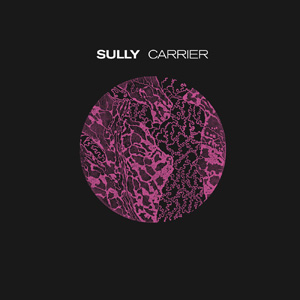 Ever since he released the stunning ‘In Some Pattern’ single on Martin Clark’s Keysound, Sully has been in my good books. ‘Pattern’, which appears here on Carrier, was a fascinating mix of dark garage (Horsepower, El-B) and the strobing synths of contemporary producers like Joker and Gemmy, with a swing so hard it sounded like the track was shrieking in pain at the end of every twisted bar. Though his releases since then have been sparse, they’ve strung us along sufficiently enough, and the release of his debut album on Keysound feels like a “better late than never” case. Considering the album’s daringly experimental back half, maybe the time passed was for the better.

Jack Stevens could have gone the easy route and done up an album of his trademark garage hybrids and got us all drooling – but he didn’t. Only the album’s first half is made of these triumphs, and every one takes a different approach to Sully’s 2-step sweet tooth. Beginning in subdued fashion, ‘It’s Your Love’ balances Burial-style hollow drums over one of his instantly recognizable fidgety, hopping basslines. With ‘Encona’ and ‘2Hearts’ (the latter first earmarked for the mythically aborted Burial DJ-Kicks CD), the vibes get weirder, as the swing is thrown askew by strange melodies and stranger synth sounds. By the time we’ve gotten to ‘Let You Know’, a slippery track driven by vintage grime stabs, things are starting to seem a bit downtrodden.

We hit ‘Scram’, a squeaky, staggered dungeon crawler, and it sounds like Stevens is losing his mind – especially when the percussion comes in. With the tempo suddenly ratcheted up to 160 beats per minute, we’re unexpectedly dropped into Sully’s twisted vision of footwork, far-flung from the comfortingly familiar garage structures of the first half. His is a gloomy take: the hypnotically layered vocals are intensely melancholic, and the frantic but submerged percussion is more like an anxious heart palpitating than footwork’s usual volley. The pervasive sadness completely derails rhythmic momentum with the penultimate serotonin drain ‘Bonafide’, which sticks a weepy, warbly piano sample on top of dive-bombing drums and bass. It’s so lo-fi it could be practically be on Planet Mu’s Bangs & Works series.

Carrier is an album split right down the middle, but it’s united by its strange mood and reflective hue, a sort of self-flagellating nostalgia. It’s a dance record where the alternately bouncy and rickety rhythms are introspective as much as uplifting. Even though it’s a fashionable flirtation right now, Stevens’ take on footwork feels withdrawn, a formula unconcerned with the genre’s hip-hop potential and instead with expressing pure, affecting emotions. Forget all that “emotional garage” bullshit masquerading around these days, with those generic dayglo synths and chirpy vocal phrases, Sully’s got the real stuff, and his debut album is a tear-jerker, full of successful and exciting experiments.