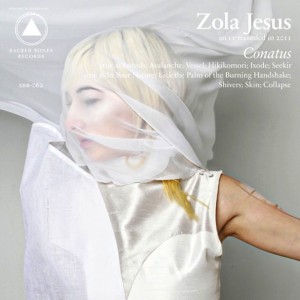 It might sound like an odd sort of compliment, but there’s something artistically garish about Zola Jesus’ music; her all-guns-blazing approach to emotional songwriting walks a constant, expertly plotted line between genuinely-heartbreaking and all-out tacky. It might be something of a cliché to describe her as gothic by now (a quick Google search of her name will bring up countless blog posts heralding her as the new, cloak-twirling poster-girl for neo-goth culture), but the G-word remains an apt way to describe Nika Roza Danilova’s music. That’s not to say that Zola Jesus has any connection to the all-black, trenchcoat-and-leather-boots world of goth fashion, or even that the mood of her songs is unrelentingly dark, but in many ways the elaborate and unreserved nature of her emotional outpourings shares a lot of traits with the tradition of gothic art and architecture. In essence, both on a figurative and a literal level, Zola Jesus’ music sounds a lot like a cathedral.

Descriptively, Danilova seems to approach songwriting like she’s designing a grand medieval building – every vocal line is designed for maximum emotional impact, drawing on her operatic background to create a sense of awe in the listener as much as possible. Musically too, there are very few sounds on Conatus that you could possibly call subtle; the pounding rhythm section, drawn-out strings and thick slabs of retro synths are all positioned to sound as moody as possible. In a literal sense, Danilova coats every track in a thick layer of reverb, to the effect that she constantly sounds like she’s performing in an actual cathedral. And to her credit, Zola Jesus makes it all work very well, which is no easy feat. A track like ‘Lick the Palm of the Burning Handshake’ could quite conceivably be a cover of an ‘80s power-ballad, but somehow Danilova pulls it off with such conviction that not only does it not sound like a novelty act, but it feels fresh and artistic.

Of course, for anyone familiar with Stridulum II, Zola Jesus’ excellent expanded-EP from last year, none of this will come as a surprise. In truth, the stylistic differences between that record and Conatus are fairly minimal, and it would be a lie to say this LP is a massive leap forward. That’s not to say Danilova hasn’t developed as a songwriter, but differences are relatively subtle. Most notably she’s become more adventurous with her drum machine patterns, as quickly becomes clear on glitchy intro track ‘Swords’, while the two tracks that follow it, ‘Avalanche’ and ‘Vessel’, display slight leanings toward electro-pop reminiscent of early releases by The Knife. But as Conatus progresses it moves more into territory that will be familiar to regular listeners. And right now, still in the early-ish stages of her career, that’s absolutely fine. For the moment Zola Jesus is producing songs that manage to appeal simultaneously appeal to nostalgic memories of teenage angst while still sounding genuinely interesting and unique. Whether she can keep the same thing going for another LP is another question, but judging by the strength of her previous collaborations with Burial Hex and LA Vampires there’s no need to worry about whether she’s a one trick pony.