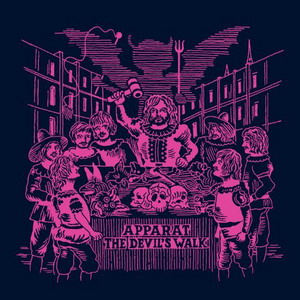 The Devil’s Walk isn’t all that bad. If you can get past the cover art – surely the worst to be sported by an album of note this year – then you’re in for, well, if not a treat, then certainly a perfectly pleasurable listening experience. Of course, that depends on how you’ve fared with previous Sascha Ring product: you’d be hard-pressed to find fault with his 2006 Ellen Allien collaboration Orchestra of Bubbles, one of the few great LPs to come out of the Easyjet techno era, while his last solo album, 2007’s Walls, had some moments of great beauty which were only just outnumbered by moments of great tediousness.

By the time of the self-titled Moderat album, Ring had really found his singing voice, or at least a singing voice (Thom Yorke’s, if ‘Rusty Nails’ was anything to go by). It grated on me, to be honest, but plenty of people loved it, and that’s fine. The point is that Ring’s journey from thoughtful sound-scaper to tech-emo auteur was well underway.

Which brings us to The Devil’s Walk. It begins with ‘Sweet Unrest’, a tremulous, organ-buttressed choral epic that looks to emulate the pastoral tone-poetry of Talk Talk’s last two albums, and doesn’t do a bad job of it; it’s only really let down by its plucked string arpeggios, which are disconcertingly reminiscent of Coldplay’s ‘Clocks’. It’s not the only song that recalls Coldplay; several pieces on here evoke the specific style of writing, arrangement, vocal performance and production that characterised A Rush Of Blood To The Head. I don’t mean that as a dismissal, and in a way The Devil’s Walk distils what I liked about A Rush (a formidable mainstream pop album, we all must concede) while draining off what I didn’t. Apparat is aspiring to the kind of soaring yet sensitive pop music that can move festival crowds as one; lighter in the air, girlfriend on your shoulders. ‘Black Water’’s stirring chord sequences, nonsensical lyrics and falsetto singing are pure Chris Martin and co, but on ‘Song Of Los’ there’s a bit of early U2 and Echo & The Bunnymen in there too. Epic’s the watchword; you half expect Richard Ashcroft to shout “Fookin’ come on!” from the wings. Stuttering polyrhythms and quivering synths gesture at the cutting edge, but they’re too low in the mix to be anything other than incidental scenery.

The second half of the album is a little more bold, if ultimately less successful. The almost offensively twinkly ‘A Bang In The Void’’s channels Steve Reich’s Music For 18 Musicians and Jim O’Rourke’s Eureka and doesn’t do too badly out of it, and Anja Franziska Plascha takes lead vocals on a plangent little gem called ‘Goodbye’ that I can see myself returning to for some time; the only shame is that she doesn’t take lead vocals on all the other tracks – it would have made for a considerably stronger album, to be quite honest. ‘Candil De La Calle’’ combines swooning strings and compressed 2-step drums nicely enough, but Ring’s singing, despite multi-tracking and subtle processing, sounds weak when brought to the fore like this, its intonation unsteady, its delivery earnest but lacking the ring of truth (no pun intended). To be fair, it’s not all bad news when our man opens his gob: on ‘Escape’ he summons up a rich, David Sylvian-esque croon to match the elegant swell of chamber instrumentation.

My underlying problem with The Devil’s Walk is that it’s terribly wet and overwrought, emotional in the vaguest and most unpenetrating way; but that’s what Apparat’s always been about, and what his fans have always responded to, so within the specific context of his oeuvre it can’t be hugely faulted. And if its more interesting textures and arrangements helps prepare younger listeners’ palates for the more rarified qualities of Laughing Stock, Songs For The Beehive, etc, then it’s all to the good.