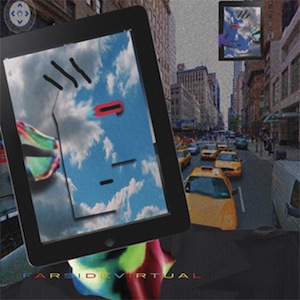 Imagine the soundtrack to a promotional corporate DVD of all that was most superficial about, and yet completely integral to the late 20th and early 21st Centuries; this is as close as one can get to James Ferraro’s new album Far Side Virtual without hearing it. As a record it is so stuffed with wry observational interpretation and stylistic aggression – a primal audio mating of family-friendly comedy drama scores, functional infomercial beds and transitional fills for a million variations on Sex & The City – that, arguably, it is more a piece of art than a collection of music. The result is so extreme as to almost be offensive, and indeed, it probably will offend a lot of people. Gleefully so.

Compositionally, Far Side Virtual is truly frenetic, nothing safe from Ferraro’s meddling, all elements completely malleable and at the mercy of his eccentric imagination. It is not necessarily worth commenting on individual tracks, as it needs to be experienced in its entirety to make sense and, in any case, each contribution is individual and of madcap character. The songwriting prowess on show is fierce, the album’s ability and aesthetic a mixture of ’96-era Aphex Twin, Mark Mothersbough, Frank Zappa, Brecker Brothers, Ryuchi Sakamoto, Angelo Badalamenti and countless others. However, the obtusely layered, chop-and-change, almost sludgy approach to orchestration and structure is certainly more comparable to host label Hippos In Tanks and roster members such as Ford & Lopatin, Laurel Halo and Hype Williams.

Cheap Gillette studio rock, burbling American Express fanfares and jaunty, swung melodies straight from a slide show fill the record, an abundance of classic ’80s digital synth and sampler presets colliding grotesquely and exuberantly with General MIDI chamber orchestras and drum kits. Their kitsch is emphasised to extremes simply by following through on the same functional aesthetic of any keyboard demo track ever produced, then applying some imaginative overdrive. It would be easy to imagine any given track being featured as incidental music on an American radio or cable show if it weren’t for Ferraro’s inability to make anything that isn’t utterly overpowering and surreal.

Indeed, here the comparison to Hype Williams is at its most resounding, explaining much about Far Side Virtual’s aesthetic. While the content could not be more contrasting, and the approaches probably quite different, both artists’ output is full of crashing advances, overdubbed parts staggering and drifting out of time, larger, more awkward edits occasionally throwing a whole track out of balance for a brief moment. Intuition ultimately leads everything. Similarly, overt cultural references are also pointedly injected in samples and titles (‘PIXARnia And The Future Of Norman Rockwell’, ‘Google Poeises’, ‘Starbucks,Dr. Seussism, And While your Mac Is Sleeping’, et al). Smatters of vox pops and tongue-in-cheek text-to-voice dialogue offer and request contemporary services, from sat nav instructions to iPad New Yorker subscriptions to Gordon Ramsay take-out sushi. Software audio idents are also blatantly thrown into the mix, such as the Skype inhale and, staggeringly, the Windows shut-down melody, as heard during the album’s strange, unresolved finale.

However, as with Hype Williams, recordings are barely mixed, and mastering occasionally lets them down. In this way, Far Side Virtual can make for frustrating listening, yet to have made any more effort would possibly have been a mistake, given the context. In the case of Hype Williams this functionality of process compliments their mystery and apathy; with Ferraro it is a by-product of his absurdity, giving him the genuine outsider-art charm of the manic bedroom jingle composer.

This album is an intense immersive listening experience that is both deeply comforting and unsettling at the same time. Containing enough irony, humour and hyperactive, intuitive compositional development to infuriate academics and bewilder many, Far Side Virtual is a modern masterpiece in both an artistic and musical sense. It is an album that should grace any collection, if not for listening pleasure then certainly to be in possession of something divisively valuable.