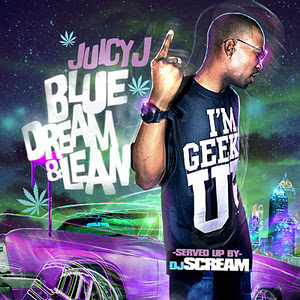 With Juicy J, the deal is very simple. He raps about drugs, money and sex, and he’s very good at it.

On Rubba Band Business 1 & 2 (2010, 2011), the Memphis rap veteran and founding member of Three 6 Mafia teamed up with then up-and-coming producer Lex Luger for a pair of mixtapes that summed up the trap rap aesthetic – rattlesnake hi-hats, cracking snares, flattened 808 kick drums and the aforementioned lyrical content – pretty perfectly. Blue Dream & Lean is the first mixtape with Juicy J on sole vocal duty since the Rubba Band tapes, and it’s comfortably their equal.

For a 28 track mixtape, the quality level here’s remarkably high – sure, there are moments where it drops, usually when Juicy’s hooks get a little too lazy (“she dancin’ like she fuckin’ / she dancin’ like she fuckin'” on ‘She Dancin’, for instance), but generally the tracks are kept nice and short, the choruses are catchy and the verses have plenty of replay value. What’s key with Juicy J is, like Gucci Mane, even when his wordplay’s convoluted and the similes become a little too forced (“give us room like hotel”), he’s got that Southern flow that hangs just that one millisecond behind the beat and makes it work. Unlike Gucci though, he seems quite self-effacing, and you get the impression that he’s not taking himself too seriously when claiming that “real hustlers don’t sleep / we be taking naps”, and exclaiming “my favourite!” after a mention of a Playstation 3.

Blue Dream‘s also pretty restrained with its guest appearances: it’s only natural that the permanently high Wiz Khalifa drops by for a sequel to Rubba Band Business 2‘s ‘Stoner’s Night’, A$AP Rocky steps out of the smoke for one of his sharpest verses yet on ‘Real Hustlers Don’t Sleep’, and Speakz and the few-more-sinister Spaceghostpurrp make ‘Deez Bitches Rollin’ their own (though to be fair, Spaceghost’s verse on ‘Real Hustlers’ descends a little too far into codeine-addicted sex offender territory for comfort). All this talk of restraint and self-awareness shouldn’t imply that Blue Dream‘s unambitious though: the production on ‘Get Higher’ never seems to stand still, dipping in and out of filters, while even at just three minutes, ‘Big Bank’ feels like a genuine Southern rap epic.