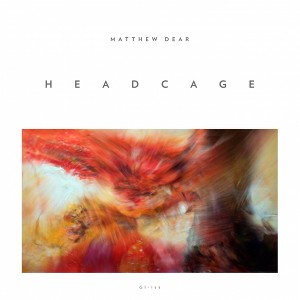 Matthew Dear’s work under his own name has always been more of a hit-and-miss affair than the twisted techno anthems of his Audion alter ego. It’s all very well devoting an entire moniker to indulge in one’s off-kilter electronic pop leanings, but the same flaws have recurred over the whole Dear discography to date: an obvious greater affinity for sound design over songcraft and his own singing.

Getting in some extra hands for his latest work has paid off, though. The title track of the Headcage EP is one of the best Matthew Dear cuts yet: its quasi-Balearic glide is underpinned by irresistible tropical rhythms reminiscent of Glasser’s ‘Treasury Of We’, and midway through the emergence of a zipping funk riff pushes the whole thing up another level. It’s no surprise to find out that Glasser’s own co-producers, Van Rivers and the Subliminal Kid, have been enlisted here. Dear’s croak works as a sinister counterpoint to the music’s blissed-out vibes; at the track’s close, his close-mic whispers are cut up alongside the winding down percussion, a tactile drip-drip-drip like dew falling from a leaf.

Elsewhere, the gently pulsing reverie of ‘Street Song’ belies its title with its pretty, pastoral air; and the shuffling beats and layered vocals of ‘Around A Fountain’ are deeply involving. The latter, with its gauzy synths and vague tinge of melancholy, seems to be Dear’s take on the acres of recent music that sounds like a putative TV advert for branded Wistful Nostalgia™; unlike Beach House et al, though, Dear’s greater knack for atmosphere means that his music doesn’t have the same off-putting corporate vagueness of most in the field.

Headcage is far from free of problems, though. ‘In The Middle’, a duet with Jonny Pierce – lead singer of Brooklyn indie inadequates The Drums – is an unlistenable mess of some of the worst vocals likely to be committed to record this year. And while ‘Headcage’ and ‘Around A Fountain’ work around the issue of Dear’s voice with creativity, the entrance of some particularly arid moaning is a wrecking ball to the sweet delicacy of ‘Street Song’. For me, Dear’s increasing focus on this side of himself is a disappointment: while this EP showcases some interesting ideas, even its best moments fall short of his work as Audion or False.