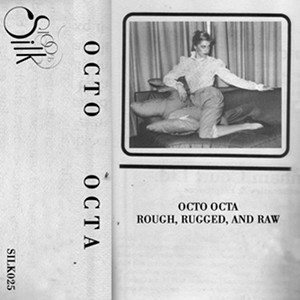 Rough, Rugged, and Raw, unfortunately, isn’t. Brooklyn-based Octo Octa’s debut album is actually very clean in its production, a continuous, 36-minute mix of 11 house tracks made largely from a sound palette shared by countless other contemporary producers. While he may be geographically closer to Chicago, Detroit, Baltimore and Latin America, the artistic method in which their musical influence is applied is very much the same as his British and European counterparts, even if the style differs slightly overall.

The result is therefore a collection of DJ tools that neither sound rough, rugged nor raw, but rather like highly polished, unfinished tracks played from Ableton Live (including a very annoying recurring filter effect), attempting to merge a few too many references that are already currently saturated. There are even samples from Amerie’s ‘One Thing’ and Tweet’s ‘Oops (Oh My)’ – songs that became clichéd for sampling and remixing a very long time ago.

This is unfortunate, as these are not bad tracks. There is also nothing to say that Octo Octa will not develop his sound; he obviously has entirely enough ability, it simply requires more time to refine his work, to channel his creativity further and find an individual voice. If this had been a digital and CD release, it would probably be noted as well-produced and with potential, joining the ranks of many others starting out on the natural progression that comes with artistic development.

However, an interesting question is posed by it being distributed on cassette. One might argue that the choice to release a body of music on any ‘obsolete’ format should justify the limited situations in which it can be played – material that acts as its own reward through being discovered solely via that medium. This is not to make such music in any way ‘holier’, but rather to bear in mind the extra lengths and different processes a listener must go to and through to consume it.

There are various labels that have made the conscious decision to put out cassettes and have successfully carved out a contextual niche in doing so. From the wonderfully perverse, such as the uncompromising computer music of ALKU and Entr’acte, to a whole scene of confidently introverted imprints exploring various audio experiments (The Trilogy Tapes, NNA, Gneiss Things, Pizza Night, Tusco/Embassy, 905 Tapes, etc.), these labels have encapsulated a particular listening experience, framing it and even heightening it, through use of cassette for a specific purpose over other mediums.

One would expect the reliable 100% Silk to be able to accomplish this for contemporary dance music. Occasional over-referencing aside, their roster has boundless creativity and has been consistently original in its output. It is therefore a surprise that Rough, Rugged, And Raw is their first release of original material on cassette by a solo artist. This review admittedly referenced a digital copy, but the music does not appear to have been created with cassette in mind other than as a retro reference, while serving as a solution to presenting the album’s structure as a continuous mix. It is a creative choice that seems whimsical and does not do the album any favours; receiving a cassette of dance music entitled Rough, Rugged, and Raw would lead to certain expectations and, alas, this does not meet them yet.