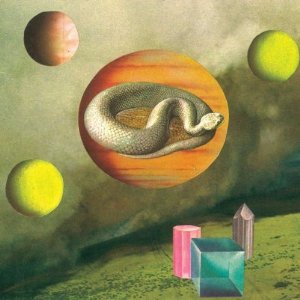 Well this is one seriously trippy long-player.

Imbogodom is a collaboration between New Zealand musician Daniel Beban and UK unfolk hero Alexander Tucker, who was responsible for one of 2011’s finest collection of songs on Dorwytch. And They Turned Not When They Want is the follow-up to 2010’s The Metallic Year and their second outing together in what is planned as a trilogy of albums.

Like its predecessor – with this being one of the central hooks of the project – Turned was recorded in the tape research studios of London’s Bush House, the soon to be decommissioned home of the BBC World Service, where Beban was working nights as an engineer when the two musicians met. Being embedded in the bowels of the BBC immediately conjures up thoughts of the Radiophonic Workshop and indeed, Beban and Tucker’s working methods are a complex, time-consuming but ultimately rewarding mixture of old and new. In an attempt to find their own unique space between player and manipulator, the two alternate between each of those roles, utilising and playing objects, instruments and live-feeds via tape machines and into the mixing desk. In a further development from the methodologies of The Metallic Year, Tucker and Beban also spent time collecting field recordings and capturing atmospheres around England’s very own ultra-alien landscape of Dungeness.

And whilst The Metallic Year was certainly an impressive debut, Turned is a stellar leap into forward into startling zones of Pagan folk concrète. Announcing itself with an airy clang from Big Ben and an ominous bass growl, the proggily-titled ‘Borogmog’s Clock’ immediately shows Beban and Tucker’s newly-heightened command of electronic manipulation, with echoing pin-pricks of clipped sigils and sirens bouncing around stuttering clock chimes, creepy traces of voice and various other unidentifiable sound sources. A curious sense of temporal displacement adds to the intrigue though, and hearing this out of the blue you’d be hard-pressed to guess when it had been recorded; Imbogodom sound quite out-of-time. The sheen of the production couldn’t be more contemporary but the sounds within, the elegiac tone, the folk instrumentation all creates blissful confusion. Eventually spiralling out of view, the opener gives way to ‘Slate Grey Light’ which reveals the significant difference between this new album and its predecessor: Songs.

Alexander Tucker has demonstrated his ability to write songs in the past; rather startlingly so on the aforementioned Dorwytch; and oh joy of joys, it transpires that Daniel Beban is quite good at writing songs too. So whilst The Metallic Year was largely instrumental, at least half of Turned sounds like it’s stretching folk songs halfway round the universe. Take ‘Heir Looms’ as an example. Through a poignant picked acoustic guitar and delicate piano, Tucker’s higher pitched voice is beautifully matched by Beban’s lower register whist swimming through an ocean of echo and reverb and then suddenly taking off at different speeds; sounds melting around your ears, a low vocal drone hiding in the shadows, key changes tugging at heart-strings with mystical pull and vaguely unsettling lyrics. Seriously, when the song at that point starts to rot away it’s hard not to check your reality meter.

Wrapped in Tucker’s own gorgeous artwork (a curious hybrid of Rousseau / Magritte textures with elements of fantasy), Imbogodom’s second album has moments of sonic invention barely heard since Locust Abortion Technician-era Butthole Surfers – albeit in slower, melancholy folk form – and Broadcast circa Ha Ha Sound or their Focus Group collaborations. If there is one niggle with Turned, it might be that the instrumental passages and songs are too separate from time to time as, in your mind’s ear, the possibility of these things bleeding together and erasing the last of those structures would be the sound of something completely extraordinary. But for the time being, that’s a little like complaining that your acid wore off 20 seconds too early. Gorgeous, beguiling, strange and way way out there, records like this restore a sense of mystery and wonder to the world. It’s a remarkable achievement.