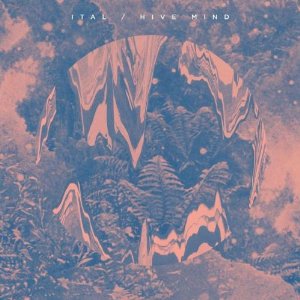 After a long wait, Ital finally debuts his first full-length album Hive Mind, and it is a genuine surprise; one reason for it being released on Planet Mu, but another for the fact that it is so heavily influenced by Kosmische and Krautrock – first evident by its 43-minute run-time across only 5 tracks.

‘Doesn’t Matter (If You Love Him)’ opens play, a slow, chugging Primal Scream-esque boogie cut, insistent vocal stutters – sampled from Lady Gaga – intoning the title scrolling beneath bass guitar, a thump-clap beat and dive-bombing lead synths. In the following track ‘Floridian Void’ a squarewave melody cuts through seeping rattles and pulsewave-pads before sawtooth drone bass hold it firmly down beneath distorted, garbled voices. Layers are continually added and subtracted to create a cloud that shifts through shelves of content, the final 3 minutes introducing sharp hi-hat off-beats and high-register tones.

‘Privacy Settings’ is, however, entirely different. Comparable to a No Wave version of Autechre’s ‘Rettic AC’, menacing synth horn, filtered breaths and cut vowels float between twitchy jump-cut kick and snare punctuation. As it builds a pulse becomes apparent, the whole track nauseously sliding through a slow oscillation, its gloomy finale coaxed out with the fade-in of subdued, ghostly wolf howls.

‘Israel’ is another cosmic house number, this time at new jack swing tempo, punches of bongos, congas and bell cymbal bouncing with delay. The bass pins down a similar groove to the album opener, but this time the synths overlaid are sweeping and celestial. Album closer ‘First Wave’ is a beautiful, half-melted disco finale over a wet percussive acid-boogie bassline, full of collapsing, pitch-nudged string samples that drift in the stereo field.

However, this latter track serves to highlight the flaw of Hive Mind; despite the huge amount of imagination apparent within Ital, unfortunately this album lacks a certain dynamism overall. Each track is approached in a similar manner and, while the percussion and grooves change from track to track, the harmonic and melodic content stay largely similar, timbrally, stylistically and structurally. ‘First Wave’ and ‘Privacy Settings’, break this familiarity, and are most memorable for it.

What has so far made Ital’s name so synonymous with exciting creativity has been the punchy variation of his singles. While it is admirable that he has taken a very different approach for a long-play album, probably attempting (almost like a concept album) to channel a particular outcome, Hive Mind doesn’t quite possess the same strength as what has preceded it. It will no doubt still find its audience, but for some this possibly won’t hit the mark compared to other releases.