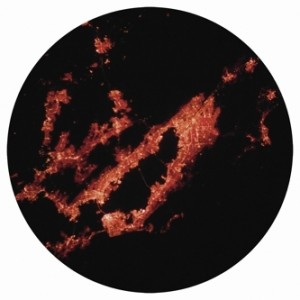 There’s a certain mysticism attached to LHF; the London-based collective have kept their cards close to their chest since the arrival of their fascinating 2010 debut Enter In Silence. The group – comprised of Amen Ra, Double Helix, No Fixed Abode, Escobar, Low Density Matter and Solarman – have appeared on Martin ‘Blackdown’ Clark’s Keysound imprint intermittently, showcasing dark, immersive explorations of both the Capital’s underbelly and somewhere entirely more cosmic. On new EP Cities of Technology, LHF’s first new transmission since January 2011’s The Line Path, LHF seem to have returned with marked cohesion – less a group of individual auteurs and more distinctly a group.

There are many intent to have them bear the flag of ‘dubstep’s new hope”, and certainly LHF’s atmosphere often seems to draw from the same dark undercurrents as the half-step heydey of years previous. ‘Supreme Architecture’s reverberating Matrix sample recalls Loefah’s ‘Goat Stare’, whilst the trilling, echoing rings of ‘LDN’ are scattered invariably across the darker corners of ’04-’06 dubstep. It’s a disservice to all parties however, to claim LHF is just DMZ rebooted. Yes, their music’s peppered with dancehall vocal cuts and driven by a pan-global selection of percussion, but there’s a sense of off-kilter curiosity at work that distinguishes this big-thinking collective in their own right.

Whether it’s fusing the melodic east and glitchy west (No Fixed Abode’s ‘Indian Street Slang’) or buzzsaw synths and, erm, baby laughter (‘Essence Investigation’), LHF’s attention to detail is unparalleled. From the percussive layering of ‘LDN’ to the dizzying rhythms of ‘Supreme Architecture’, the craftsmanship on display is consistent regardless of which LHF cohort is at the fore. It’s this consistency of vision and painstaking approach to detail that – despite bringing four notably disparate ideas to the table – sees LHF sounding more like a group project than they ever have before.

In many ways, LHF encapsulate the genre-multiculturalism that make dubstep’s subterranean prime so irrevocably exciting; the terse atmospherics of the underground, the vibrant Indian instrumentation, the dense variety of city life. It’s often remarked that Martin Clark’s Keysound so consistently encapsulates the divergent culture of London, and there’s no doubt that LHF’s winding Cities of Technology not only adds another fascinating, engaging chapter to the label’s repertoire of capital city soundscapes, but makes for a fascinating precursor to the group’s forthcoming debut LP.