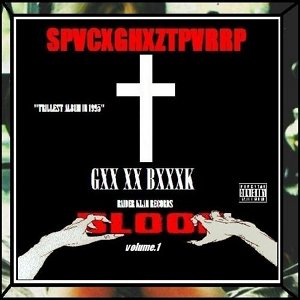 In the mainstream of hip-hop, rappers talk big about living large over expensive, pristinely produced beats. Rappers like Rick Ross give the impression that the recording of their music, like their lives, takes place in the most opulent surroundings imaginable. This type of music is made to be played – loudly – in the streets, at parties, in the clubs, at the gym; often voiced by massive egomaniacs but still sociable, outgoing music, in a chest-puffing, waist-grabbing, cocktail-injecting way.

The internet, of course, has blurred the line between public and private identities in general, and this effect has certainly been felt in hip-hop, which in the past few years has seen the cult ascendancy of “bedroom” producers and rappers like Lil B, Main Attrakionz and Clams Casino, who have seen their homespun, personal and eccentric styles reach a wider audience, particularly in the hip, indie-friendly online press, which naturally prizes their off-kilter, experimental, sometimes contrary takes on “straighter” mainstream rap. This “bedroom” rap music isn’t outgoing, intended for parties and clubs; if anything its ”ingoing” – expressive of an isolated inwardness that has led its makers along wayward lines, far from the free-ways rappers like Ross drive their musical Maybachs down.

Miami’s Spaceghostpurrrp, like many of these rappers and producers, is very young (in his earlier twenties) and very prolific, having released scores of mixtapes and YouTube / Hulkshare singles via the internet. Like many other internet-based rappers, Purrrp and his crew Raider Klan speak their own language, a code for devotees of Purrrp to replicate in their tweets, YouTube comments and blog-posts. In Purrrp’s case, letters are substituted for other letters, so for example each of the tracks here will be listed on your mp3 player as being by: “SPVCXGHXZTPVRRP”.

Last year Purrrp’s reputation expanded somewhat beyond the bedroom, with appearances and beats featured on much hyped mixtapes by ASAP Rocky and one of Purrp’s heroes, Three 6 Mafia’s Juicy J. However, God Of Black suggests that Purrrp’s music still belongs very much to the bedroom. Densely layered with sound effects, movie dialogue clips and distorted samples, his music (and it is the music which sticks out) seems at first cluttered with bric-a-brac, like the bedroom floor of a hermetic teenager, littered with video games, blunt ends and well-thumbed porn mags. It sounds gritty, unpolished and cheaply-recorded, creating the impression of music emerging through and under the door of an adolescent’s closed bedroom door like weed smoke.

In actual fact, Purrrp’s production is far from chaotic or amateurish. Underneath the rough surface of his beats (and despite the often aggressive, nihilistic and/or misogynist lyrics Purrrp accompanies them with), one finds that it is intricately, obsessively concocted music, rich in atmosphere and texture. It is ”head” music, communicating a singular mindset and probably best appreciated by the solitary and fully engaged listener; its unpolished roughness is illusory. In fact, very audibly influenced by 90’s rap music, especially Three 6 Mafia, Purrrp proves himself something of a studio wizard in meticulously recreating the sludgy, cassette-dredged-from-a-swamp quality of his source materials.

Last years brutally churning but unearthly Purrrp tape Blackland Radio 66.6 did a great job of replicating the horrorcore grind of old Three 6 Mafia albums as heard through the intermittent crackle of a satanic Southern radio signal. The pastiche came complete with authentically looped, chopped and screwed expressions of hideously violent and misogynist threats (“Take this dick, bitch, and stop crying like a little ho”). With the zombie-like mindlessness of these declarations Purrrp sometimes seemed to be baring his obsessions more than his demons, but his outré production instincts (sampling tribal drums, mystical chimes and Mortal Kombat fatalities) put an avant-garde twist on his retro fixations, recreating them in his own image.

Purrrp’s esoteric ears are again at work on God Of Black, and the inevitable influence of 90’s rap is always filtered through his experimental instincts. ‘Low MF Key’ for example, sounds like mid 90’s G-Funk, but quite prominently features a recording of a thunderstorm. There is more “real-world” ambience elsewhere: the tape ends with a cacophonous blending of heartbeats and car horns. Purrrp’s music, however, doesn’t belong to the “real-world”: it belongs to Purrrp alone, to his obsessions, fantasies and dreams.

While Blackland Radio was like a nightmare, dark and deranged, God of Black is brighter and softer, though just as dream-like, sometimes coming close to the so-called ”cloud rap” of Main Attrakionz in its sense of a dazed and hazy disconnection from reality. Purrrp’s lyrics are generally friendlier, too (“keep your muthafuckin’ head up / it’s a cold world, nigga / I know everybody fed up”), if extremely underwhelming as compared to his production. When it comes to rapping Purrrp is closer to being the amateur that he only superficially resembles as a producer, and his lyrics are only fitfully as compelling as his beats. But on tapes like God Of Black Purrrp does things by himself, for himself, with mixed results. Though he raps “I stay to myself because I always must elevate”, that elevation sometimes falls into question, when the hypnotically obsessional focus of his mind becomes claustrophobic, the dreaminess wishy-washy, and the bedroom walls seem to start closing in around your ears.