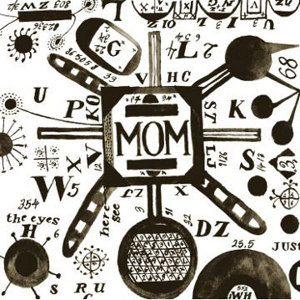 Documentary aficionados will probably already be familiar with Werner Herzog’s 1972 feature Fata Morgana, a trippy compilation of footage snatched from the wilds of the Sahara. Over a soundtrack that darts from Leonard Cohen to tribal folk songs, he presents a cataract of fragmented images: scrolling dunes, a child dancing, a lizard’s forked tongue, penumbras cast over sand. At the Southbank Centre’s Ether festival in 2009, Mouse On Mars were invited to perform a new soundtrack to the film, and in many ways it’s the perfect visual analogue for their music: a succession of discrete elements, fudged together into something oddly compelling. Parastrophics, their first LP in six years, showcases their unique methodology at its absolute best.

Emerging from the German electronica scene in the mid-nineties, Mouse On Mars – aka Jan St Werner and Andi Toma – have long been characterized as musical magpies, snatching tics and tricks from a range of different genres (it’s no surprise that Parastrophics emerges on a label owned by Modeselektor, another Teutonic duo who flit from style to style). On 2006’s Varcharz, their eclecticism was in danger of becoming glib. Parastrophics, however, is a masterclass in productive synthesis.

The skittering electronics of ‘the beach stop’ recall Max Tundra’s ADHD MOR, but there’s also a dreaminess, an oddly wistful quality to proceedings. It’s convoluted, but never annoying. ‘chordblocker, cinnamon toasted’ centres around a nerve-twisting synth line, whilst also somehow assimilating the kind of dusty melody you’d expect to hear in Song For The South: it’s a startling marriage of sounds old and new. Ideas rarely stick around long enough to outstay their welcome; just as the day-glo synths and Sega Megadrive bleeps of ‘imatch’ lose momentum, St Werner and Toma throw in a spasmic drum tantrum.

For a band that’s been around for some time, Parastrophics also sounds effortlessly contemporary. Take ‘metrotopy’, a collage made out of cuttings from contemporary dance music’s playbook. You get your Blawan-style drum clatter; a warped sing-song R&B vocal; shivering Jacques Greene synths; and, about halfway through, the sort of skewed hip-hop lilt you might expect from a Heralds Of Change record. The futurist head-nod of ‘syncropticians’, meanwhile, looks to beatmakers like Dorian Concept or DZA. Eighteen years after their debut, the duo still sound firmly plugged in.

Conversely, the few moments where Parastrophics short-circuits occur when St Werner and Toma are a little less savvy in picking their influences. Album centerpieces ‘wienuss’ and ‘they know your name’ summon the spirit of Big Beat, and then go on to remind us why it disappeared in the first place. The latter piece also includes a punky vocal that manages to touch all the wrong nerves; these tracks sound, frankly, a little doddery. Ultimately, however, they are the exceptions that prove the rule. Even if Mouse On Mars sometimes veer into less edifying territory, Parastrophics‘ eclecticism principle is thrilling. Plus: ‘baku hipster’, the most traditionally ‘IDM’ thing here, is far and away the highlight. Over a Kevin Blechdom digital throb, the Japanese vocal line is pulverised into fragments, each syllable converted into a new percussive unit. It’s totally nihilistic, and totally wonderful.

In a curious way, the record Parastrophics brings to mind is James Ferraro’s recent Far Side Virtual. Not in the sense that the two sound especially alike – they don’t – but in the way that both attempt to focus attention on the ambient noise of contemporary digital life. Much of Parastrophics deliberately sounds like it’s halfway through the buffering process: that tinny squelch, the metallic prang of half-rendered audio, is its principal sonic motif. And, like Ferraro, Mouse On Mars are clearly interested in spoofing modern consumerist culture: the vocal line of “chordblocker, cinnamon toasted’ repeatedly reminds us that “Facebook’s a cockblocker”. At one (particularly self-aware) point, a cartoon voice even asks: “Jesus, what happened to Mouse On Mars? They’ve departed so far from their beginning!” Parastrophics‘ absurd, digital music is a natural soundtrack for an absurd, digital age.

The rollercoaster is about as hoary a trope as you can get to describe electronic music, but it’s applicable here. Not in the sense of ‘builds’ and ‘drops’, of course – more in the way that Parastrophics fetishizes velocity, makes a virtue of disorientation. Herzog, it turns out, named Fata Morgana after an optical trick: when passing through pockets of air with varying temperatures, light rays are liable to bend, giving the impression of a spectral blur on the horizon. It’s a fitting figure for Parastrophics, a record that pushes a catholic range of sounds through filter after filter, and turns out something at once smudgy and beautiful.