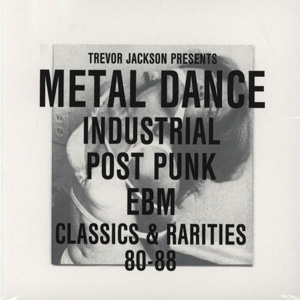 Eating itself is an art form that pop music continues to excel at – and ongoing acts of cannibalism in the realms of contemporary electronics are underlined by Trevor Jackson’s Metal Dance compilation. A showcase of post punk, industrial and electronic body music (EBM), all 27 tracks bristle beautifully with angles, jolting funk and cold robotic rhythms, and although they may have been culled from 1980-88, they’re often bound by dancefloor sensibilities which still resonate today.

As the Playgroup man’s first foray into the musical fray for years, the timing of Metal Dance’ release couldn’t be any more pertinent. The smokier, more discerning dancefloors in the UK’s capital and beyond are throbbing to the pulse of mechanical, frenetic and occasionally down-right savage grooves: Brixton-based clubnight World Unknown has been sending out an EBM signal since its inception, while Glaswegians Optimo and the likes of Andrew Weatherall and Sean Johnston from A Love From Outer Space have all been champions of these obscure noises.

And the reason why? As much of the music contained on Metal Jacket testifies, there is a timeless, riotous energy to the regimented sonics which age simply won’t dull. Indeed, it’s hard to accept just how old many of the records are, such is the heat at their centre – the sounds, arrangements and funk seem beamed in from a world still waiting to happen. Jackson’s selection is reminiscent of his 2002 DJ-Kicks outing and is a must for anyone bowled over by his sets over the years but still struggling to track down the elusive lines of sound he traverses.

Many of the names peppering the Jackson designed sleeve on Metal Dance may be unfamiliar but the quality of the selections is close to unrivalled. Beginning with the Bubblemen’s drone rock theme ‘The Bubblemen are Coming’, Jackson shows no fear and goes deep, exposing treasure after treasure – including the sturdy funk of 400 Blow’s ‘Pressure’, Pete Shelley’s robot dance in the dub rendering of synthetic cruncher ‘Witness the Change’ and the harsh chugging of Mark Stewart’s ‘Fatal Attraction (Contagious)’. By featuring the likes of Assault on Precinct 13 film maker John Carpenter, D.A.F, Alien Sex Fiend and the Severed Heads, Jackson manages to create an ear-opening path through these oft overlooked aural areas while refusing to take his eyes off the dancefloor. Dig in – He’s done the hard work so you don’t have to.