Dolphins into the Future: Canto Arquipélago 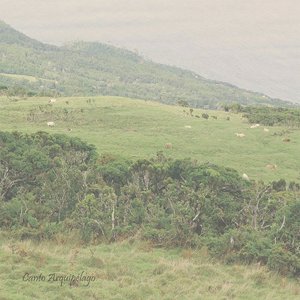 From Antwerp via Atlantis, a new transmission from Dolphins into the Future is always an exciting prospect. Lieven Martens is a Belgian artist who records under a variety of pseudonyms with always fascinating and beguiling results. Dolphins into the Future has become the most well-known of these monikers, approaching the forced, anxiety-dissolving balms of new age music and pushing its inherent textures and vibrations to an illogical acid-fried extreme: a very high form of wiped-out, washed-up oddly-beautiful psychedelia.

Martens usually covers a lot of ground within the confines of a deliberately restricted palette, but Canto Arquipélago, released by the aptly-named and also always intriguing Underwater Peoples, is slightly different from previous releases in that the prominent arpeggiated synths of previous albums like On Sea-Faring Isolation and The Music of Belief are almost wholly absent. On these and other Dolphins works it feels like it’s yourself that’s lying – baked and baking – on a beach somewhere, right in the centre of the landscape around you. This latest record removes any trace of human-kind, instead wishing to document the life of an island.  As Martens alludes, “Once an island gets born it’s a continuous struggle, a continuous dialogue, a learning, a battle and cooperation of influences. The sea starts bashing on its shores. Erosion starts the complete demolition of the island. But at the same time, sun and sea give birth and food… Archipelagos have a heavy rhythm.”

‘Jardim Dos Tufaos’ immediately reflects this heavy rhythm, percussive thunder drifting out over several minutes of tidal field-recordings and a distorting breeze. As with all of Martens’ work, there is a subtle lo-fi aesthetic at play here, allowing the imperfections of the aforementioned mild gusts to remain unchecked, reminding me of Dennis Hopper’s naturalistic capture of bleached sun-spots in Easy Rider.

It’s after this introduction that the instrumental template and abstract structure of Canto Arquipélago is properly unfolded. ‘Noite’, like many of the pieces here is both a self-contained odyssey and an indispensable part of the overall flow of the album. Opening with crisply animated shakers, burbling delicate synth tones, pitched midway between ocean-emitting bubbles and wind chimes, seem to rise out of the ground. These fade out after two minutes to allow the sound of crickets, rain and a gentle meandering melody, which circles, unresolved, while distant bird cries, rain and faraway percussive rumbles fill out the spacious teeming landscape. Another phase, and the shakers and tones re-emerge only to gradually be replaced by the gentle lapping of the tides and more crickets. This is a consistent trope across the whole record, constant motion equaling endless renewal, of life and destruction – the sound of eco-systems in operation at the whims and mercies of non-human intervention.

Despite working to a very strict instrumental foundation and gentle atmosphere, Canto Arquipélago‘s constantly shifting structure allows to reveal a raft of surprises. ‘Verde’ is practically a genre of its own, a strange kind of tropical instrumental hip-hop interrupted by a muted horn-like call falling out of the mix and a shuffling tribal break that kicks in over a clipped synth and some tape rewind, before dropping just as rapidly back out view. The epic, 12-minute climax ‘Levante’ moves through countless phases including bursts of militaristic snare and a searching animal-cry synth that is an almost exact replica of Jon Hassell’s conch-shell trumpet. Hassell, in fact, is likely an appropriate reference: Canto Arquipélago is the second album in the last few weeks (the other being Starving Weirdos’ Land Lines) to put me in mind of that conflation of exotica and ambience that is Fourth World music.

Regardless of whether a Fourth World resurgence is coming or not, this is another strange and delightful emission from Dolphins into the Future, belonging practically to a genre of Lieven Martens’ own making and further clarifying his abilities to compose beautifully immersive soundscapes out of the starkest of materials.