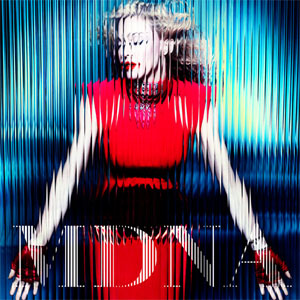 To fully comprehend the scale of what Madonna attempts to pull off with each release these days, consider this: there are adults out there with no memory of Madonna as a real-time pop cultural entity before 2000’s Music, with no sentimental memory of any of her zeitgeist-redefining, game-changing work over the prior two decades. She’s outlasted all her megastar contemporaries – first in relevance, then in sanity and now literally, with death now showing up on a regular basis to claim legends of the ’80s. No wonder she seems obsessed with youth and immortality – and no wonder each new album seems like more of a tightrope walk.

It’s arguable that she’s never had more to prove than with her twelfth album, MDNA: Madonna has had her successes and failures over the years, but never had she appeared to have so little idea what she should be doing than on 2008’s execrable Hard Candy, a turgid mess of tardy collaborations with the equally past-their-prime Timbaland and Neptunes. But the hope briefly promised by MDNA‘s brilliant triple-punning title was swiftly extinguished by its lead singles, with the leaden ‘Girl Gone Wild’ outdoing the merely throwaway ‘Give Me All Your Luvin’ in sheer misconceived awfulness: the rote, lifeless singing on the former sounds as though a guide track was mistakenly kept on the finished song, and arguably marks the worst vocal performance Madonna has ever committed to record. A track listing featuring titles such as ‘Gang Bang’, ‘I Fucked Up’ and ‘I Don’t Give A’, meanwhile, elicited visions of Lourdes retreating to her bedroom on its emergence and refusing to leave for a week.

If lowering expectations to rock bottom was a tactic, it works: MDNA runs the gamut of quality from ghastly to mediocre to brilliant, but it’s not the unmitigated disaster that many feared. More than anything else, Madonna’s Achilles heel in recent years has been her voice. It’s a cliché to point out that she’s never been the world’s most talented singer, but if nothing else, MDNA illustrates in retrospect why she was a great vocalist. Her infamous mid-’90s singing lessons for Evita notoriously smoothed the rough edges off her scrappy, hungry vitality, but she got away with this over the subsequent decade thanks first to songs that benefited from her new hauteur (‘Frozen’), then thrillingly manipulated electronic vocal treatments (‘Die Another Day’) and finally banging beats that brooked no resistance (‘Hung Up’). But shorn of these tactics, it’s all too apparent that Madonna has been left with a dry, hardened husk of a voice, as rigidly incapable of conveying emotion or nuance as an overly Botoxed face. Too much of MDNA comprises adequate, if basic, bubblegum songs that a teenpop singer with enough moxie could ride to glory; in Madonna’s hands, ‘Turn Up The Radio’ and ‘Superstar’ fall flat. On ‘I’m A Sinner’, she sounds completely uninvested in the concept of sin or the details involved, shrugging “I’m a sinner and I like it that way” on autopilot as woo-oo-oo backing vocals obliviously pop off somewhere in the distance. Madonna is unrecognisable as the woman who made ‘Like A Prayer’ and ‘Erotica’.

MDNA fares better when she’s unrecognisable in different ways. As the chorus of ‘I’m Addicted’ explodes in a glitterbomb of synths, Madonna sinks into the beat and succumbs to glorious anonymity. ‘Gang Bang’ turns out to be one of the highlights, a spare, monomaniacally focused electroclash revenge fantasy in which Madonna, terse and businesslike, intones threats of violence like a cross between a mafia godmother and Miss Kittin. (A decade on, an electroclash revival is surely now acceptable.) Elsewhere, ‘I Don’t Give A’ finds Madonna turn her rigidity to her advantages: she rattles through her daily routine in its verses like a PR girl’s fingernails click-clacking through her multiple Blackberrys, before a Nicki Minaj verse ushers in triumphal synthesised orchestral fanfares.

Elsewhere, there are still obstacles to be dodged: the lyrical clunkers that Madonna fans have long suffered (“You can have the password to my phone” is no one’s idea of a romantic compliment), a few grimly inevitable dubstep breakdowns, the knuckle-whiteningly awful sound of M.I.A. girlishly demanding to be spanked on ‘B-Day Song’. But it’s not MDNA’s missteps, which are balanced by genuinely brilliant decisions, that hasten irrelevancy: it’s the fact that it sounds like the work of an ingénue, but not how Madonna would want it. In telling contrast to the fully-formed, confident shape-shifter with the ability to fully inhabit any role she wanted at will, she now sounds like a woman groping in the dark, occasionally hitting on a trick that works but still unsure of what her voice should be.