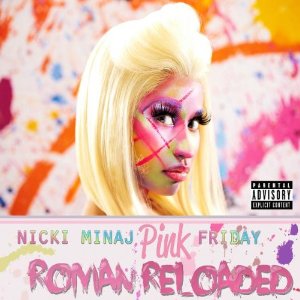 “One, two, three, do the Nicki Minaj blink.” The defining characteristic of the Nicki Minaj experience is a scattershot sensory overload. When she hurls her entire bag of tricks at a track, she is capable of redefining “extra”. It’s not just her aim that can be maddeningly inconsistent, though, but her targets as well: her ascent to megastardom has been a story of flashes of ever-evolving genius, lowest-common-denominator laziness, second-guessing her audience, scoring hits by pure accident, radically subverting conventions, regressively adopting conventions, toning herself down, turning herself up – often all at once, and while simultaneously rattling through her repertoire of personae and accents too.

Her second album, Pink Friday: Roman Reloaded, opens with Minaj eyeing the bar she’s set for herself – and vaulting 500 miles over it. Within one song, she’s ricocheted between speaking in guttural tongues and outraged, elongated vibrato, sung a chorus with the demented glee of a Disney villainess, interpolated ‘O Come All Ye Faithful’ for no reason at all and declared: “I am the ultimate svengali / Them bitches can’t even spell that.” She interrupts herself on the next track, briefly halting a beat as relentless as an industrial meat grinder to croon acappella: “Dick in your face. Put my dick in your face.”

Over the album’s opening six-track run, Minaj expresses her superiority from every angle, running rings around her foes with puckish playfulness (‘Beez In The Trap’), devil-possessed voices (‘Come On A Cone’) and sweeping imperiousness (‘Hov Lane’) over warped synths, explosive gun sounds and a ‘Grindin’-inspired beat made entirely from finger-clicks and a steadily dripping tap. Few rappers have as much command over as many vocal inflections, subtle as well as huge, as Minaj, who walks the tightrope between aural gif moments and straight-faced menace with aplomb. Endearing, too, is when she lets excited disbelief that her success is actually happening to her seep into her braggadocio. “When I’m sitting with Anna, I’m really sitting with Anna / Ain’t a metaphor, punchline – I’m really sitting with Anna!” she exclaims, referring to the New York Fashion Week snap of Minaj, clad in neon multicoloured bobbles and a platinum blonde beehive, in the front row beside a prim, poker-faced Anna Wintour.

It’s some of the most astonishing music you’ll hear this year; at several points, you may feel as though Minaj has turned your entire brain into exclamation marks. As is the way with peak Minaj, it’s so overwhelmingly dazzling that you might not notice at first how revolutionary it is: saving her toughest, most raw lines for Roman, her gay male alter ego, Minaj effectively fast-forwards past hip-hop’s endless phase of unreadiness regarding prime-time gay rappers by creating one with no fear but a whole lot of venom. In that crazed opener, ‘Roman Holiday’, he explicitly repels those who would try to alter or fail to accept him; later, he doesn’t just go toe to toe with Lil’ Wayne, Rick Ross and Cam’ron, but turns them into his fag stag sidekicks.

In the end, though, Roman Reloaded turns out to be more about Nicki than Roman – and specifically the vexed question of maintaining her commercial appeal. On her Pink Friday debut, Minaj ultimately seemed unsure of how to present herself, despite her multiplicity of voices; on the 22-track Roman Reloaded, she abandons any pretence of aiming for coherence and instead shamelessly caters to each demographic separately. The rap section is followed by an R&B section – the hazy majesty of ‘Champion’, on which she shouts out her recently killed cousin as well as a list of fallen female friends, is undeniably moving; a love duet with Chris Brown is undeniably repellent – which is followed by a horrifying run of pounding trance-pop produced by hacks like RedOne and Dr Luke. With the honourable exception of ‘Pound The Alarm’ – its avalanche-force hoover noises are so over-the-top and its hooks so catchy that you may as well save time and cave into it now – it’s hard to tell whether Minaj in dance mode is worse when she’s being witlessly execrable (‘Starships’), exhuming obscure classic guest verses to serve evil instead of good (‘Whip It’, formerly Cassie’s ‘Fuck U Silly’) or merely anonymous (the aptly-titled ‘Automatic’).

Despite this, Roman Reloaded feels more satisfying than Pink Friday by some distance: it’s not a classic album, but its contents implicitly argue that the concept of a “classic album” has become irrelevant in 2012 anyway. In an age when music fans of all persuasions cherrypick only the songs they choose for their iTunes libraries or Spotify playlists, making an EP’s worth of material for each of your fanbases while ignoring unimportant details such as whether they flow together seems eminently sensible: one wonders why more major label artists don’t take this route.

It seems appropriate, then, that Roman Reloaded‘s finest moment feels like an afterthought, a sop to Minaj’s Caribbean heritage tacked on as the penultimate track. ‘Super Bass’ producer Kane Beatz has a knack of using chintzy digital sounds that could be derived as much from J-pop as dancehall as the perfect frame for Minaj’s emotions; and on their duet ‘Gun Shots’, the moment when Minaj and Beenie Man finally come together for its final, surging chorus – makes the heart swell with pure feeling. At times like that, Minaj seems capable of anything; and if that entails her trying to do everything, it’s a price worth paying.