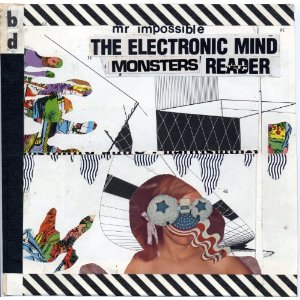 Taking an approach similar to Battles, keeping the instrumentation from song to song pretty much the same, Black Dice spend their sixth album Mr. Impossible exploring what can be achieved with a particular set-up. Their choice of palette is processed drums, processed vocal garbling, processed guitars, processed bass and a lot of synthwork (possibly processed), and the attempt seems to be to take a chaotic palette and instill rigorous, albeit unexpected structures to create new pop-like songs.

In this regard Black Dice have definitely succeeded. However, the abundance of thickly layered, manipulated material flying by gets tiring, and some of this could have been edited more militantly down to bare essentials.

Where it really works is therefore at its leanest, none more so than opener ‘Pinball Wizard’; a just-under-7/4 time signature riff on drums and bass, with call-and-response talkbox blabbering and overdriven guitar. The pulse of ‘Rodriguez’ keeps its noise elements and squeaky melodies firmly in line before a brilliant cowbell-featuring computer-torn beat drops, and ‘Pigs’ thrashes through an appropriately mad three and a half minutes of anarchic skate-video synth punk.

As it progresses Mr. Impossible comes across as something that must have been a lot of fun for the band members, and no doubt will be to perform, but is potentially less so for listeners. Black Dice’s record comes across as a little too “pre-planned” in its oddness, very nearly a cartoon of itself.  The sound is extremely tight, but by working as a unit the focus is on the performance and not so much on the songs.

This album is therefore most comparable to Mouse on Mars in how it elevates textures and studio production to the same level as the rest of a pop song’s construction. However, this dilutes the pop aspect to reference (possibly to be attacked), which is a shame; ironically, Mr. Impossible’s best results come from its more overt references to what could be deemed as musical clichés.

At its best, Mr Impossible is of a creative standard comparable to Ween or Devo, possessing the same subversive humour and performance talent, and plenty of wild, exciting moments. Yet despite having created a record that admirably challenges pop conventions, Black Dice could let a little more of the tradition in to help shape their material further and get the most from this direction.