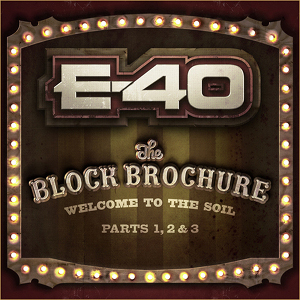 Available on: Heavy on the Grind 3xLP

Earl Stevens is nothing if not a hustler. While the rest of the rap world has been flooding the net with free mixtapes, E-40 has placed seven stuffed-to-the-gills albums for sale in stores within the past three years. The four discs of his 2010-2011 Revenue Retrievin’ series, a veritable  renaissance, were his most ambitious project yet and found Earl regaining his creative footing after the relative failure of 2008′s The Ball Street Journal. Following that endeavor, the trio of simultaneously-released albums that together comprise The Block Brochure: Welcome To The Soil 1, 2, & 3 represent his largest one-time outpouring of material yet.

With that much output comes the possibility of fatigue. Having a running time of four hours including bonus tracks and with each individual disc patchier and less highlight-ridden than those of  Revenue Retrievin’ (a spell toward the end of Vol. 1 is a particular slog), The Block Brochure is a daunting proposition and quite simply a difficult amount of music to process. This is unfortunate, though, given the sheer number and variety of gems strewn throughout.

Early on the first volume there’s the Bangladesh-produced car-culture anthem ‘They Point’, featuring gloriously goofy guest verses from Juicy J and the on-the-verge-of-blowing 2 Chainz, while on later discs ‘Tryna Get It’ with T-Pain and Twista sounds like an even slicker and soupier take on Busta Rhymes’ ‘What’s It Gonna Be’, and the Too Short feature ‘Be You’ presents an unlikely feel-good anthem.

The style of song E-40 has perhaps most excelled at in the past couple years are low-key noir creepers with skulking beats, here represented by tracks like the very opening track ‘Fast Lane’ and Vol. 3′s ‘Wasted’ and ‘Making My Rounds’. These tracks lend him the casual menace that he perfected in his early days but otherwise lacks on more recent material, where his most outlandish tics bring a levity that often ends up overwhelming his darker side. Still, the versions here, while well-executed, often feel in want of 40’s perennially hardheaded sidekick B-Legit, whose contributions here fall on lighter-natured songs that don’t benefit as strongly from his presence.

However, even on the occasions here when production and hooks fail him, 40 remains one of rap’s most inventive lyricists and sometimes finds a renewed interest in experimenting with his cadence. He’s still feisty, too. On Vol. 3 opener ‘Jealous’ he commands to anyone on his heels, “You want me to pass the baton, come and take it from me.”