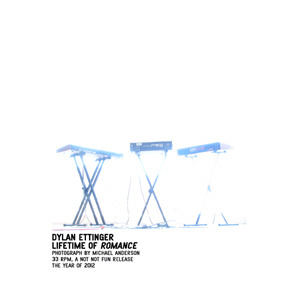 Ardent sports fan Dylan Ettinger has game and performance on a record that takes his sound to a new, overtly comedic level. Far from the romantic ramifications suggested in the title, the bombast of its tone (fast, fun, concentrated humour), nor the Lothario it so resolutely satires, Lifetime Of Romance is a feel good record.

Loosely speaking, it’s a play off between pop-ier synth wave tributes such as opening track ‘Wintermute’, and instrumental, specifically synth, tracks such as ‘Disparager’. The former, ‘Wintermute’ is defined by its striking melodies; big, full synths standing tall while Dylan plays the popstar with overt vocals – far from the usual image of the nervous bedroom musician often associated with artists like Ettinger. Overly dramatic and overblown, despite saying very little with its lyrics, it’s an increasingly satirical track, reflecting elements of 80’s Library Recording – title music to a sepia-bleached cable sportscast.

Computer programs are shadows in the night on a record which places analog dreams and amorous failings before digital love. Ettinger’s transparency comes through in these odes to his synths, with the machines employed listed prominently on the back cover. ‘Disparager’ and ’18’ clearly cater to nerdy concerns before pop needs, and it’s the inclusion of these sleeker, more flowing sounds in contrast with the abrasiveness of Lifetime‘s pop structures that give the album a sense of completeness, even if is at the expense of the non-stop party anthems. As with many records today, there’s a play-off between pastiche and experimentation, one which Ettinger successfully embraces by wearing on his sleeve.

The highlight of the record comes in ‘Maude’, Ettinger’s exclusive attempt to reveal his cupid prowess. Structured episodically, the track contains a blistering sax solo in the second phrase. Here, more than ever, we hear Ettinger impose a ridged structure onto a track that could have easily been the sprawling jam associated with previous records, the type of move that leads musicians to proclaim, “This is my pop record.”

Here the record begins to take off, with the lyrics revealing greater truths. “I expected this…all the anger seems fake now,” devastates the romance of ‘Maude’, bringing it down to tragedy. The track entertains this bitter love, but the most resonant lyric, “All I could do is issue a public apology,” shines in today’s political discourse. Little would Ettinger know that by the time of the record’s release the public apology would have entered the sphere of the absurd, where every feeling, thought, or opinion should come with a public apology just to satisfy any detractors. In the UK we saw this exhausted in the Jonathan Ross-Russell Brand fiasco, but more currently the US took the action to a higher level with Rick Santorum a broken record when asking Obama to apologise for anything and everything, or Newt Gingrich instructing the U.S. President to apologise for something that Robert De Niro said.

The big question surrounding Lifetime was how would a record full of lyricism work for Ettinger, and it turns out that his verses have value well beyond the tragic love life he so self-deprecatingly portrays. He’s no crooner, but his wicked humour makes up for it in spades.