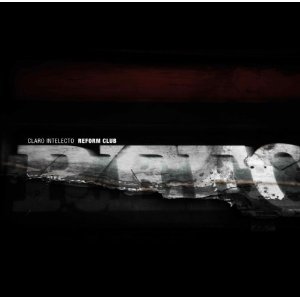 Mark Stewart (not that Mark Stewart) has been quietly releasing elegant dub-techno as Claro Intelecto for over a decade now, originally on the now defunct AI label then, most famously, alongside the king of knackered house Andy Stott on Modern Love through to 2012 and his newest port of call, that unwavering Amsterdam bastion of techno, Delsin. It was, of course, on Modern Love that Stewart has produced his most famous and acclaimed works, namely the edgy but cushioned pneumatic house of the appropriately named Warehouse Sessions, and 2008’s melodic Metanarrative.

Almost entirely out of sight and sound since 2009, Stewart resurfaced a couple of months back with the Second Blood EP (the title track of which is present here) which served as a forerunner to Reform Club, his third album and first bona fide long-player since the aforementioned Metanarrative.

Modern Love’s recent trajectory deep into the world of knackered murk would initially seem a million miles from the more expansive textural clarity that Claro Intelecto is renowned for, and would explain the label change, but I don’t think Stewart and Stott are much farther apart than when they were both simultaneously developing their own personal variations of the dub-techno template. Whilst Stewart may not have made some of the more formal stylistic innovations that Stott has made of late (Reform Club doesn’t offer any drastic changes in sound from the Manchester-via-Detroit stylings of Metanarrative), they converge with an uncanny ability to producing what feels like a rhythmically slow (sometimes crawling) techno that is richly saturated with a thoughtful, verging on melancholy atmosphere. Their divergence comes with Stott’s exploration of eerie and uncanny spaces through a sound-field of mud, whereas Stewart has refined and emphasised an almost confessional 2am techno soul music.

Opening track ‘Reformed’ sets the cohesive template that runs through Reform Club’s 53 minutes with a bubbling dry bassline, widescreen synth stabs, Basic Channel-style static and a 4/4 drum – no major divergences from the dub-techno template but certainly delivered with a peerless grace and maturity. ‘Blind Side’ ups the ante a little by foregrounding that marginal hiss and cranking up the tempo, moving in to shimmering Henke-like territory, while ‘Still Here’ (and what a marvellously fluid title that is) is instantly affecting, draping heart-breaking elongated synth tones over chopped and jazzy cymbal splashes, electro pulses and weary late-night chimes. This is slow motion Rainy City techno, proper Blade Runner in fact, and from this point it’s pretty much magic all the way. ‘It’s Getting Late’ cranks up the tempo and adds sparse doses of 303 while retaining the internal wanderlust, and ‘Scriptease’ verges on Burial territory approached from a pure techno direction, with liquid piano and abstract mechanoid interruptions.

The spaciousness of Claro Intelecto’s sound and its indebtedness to its heritage masks some abstract twists and turns. ‘Night of the Maniac’, for instance, has a remarkable depth of field – distant crackling pops, a one-note synth drone that worries away at your subconscious creating an odd kind of tension, repetitive wobbling vague cymbals and a bass line pitched halfway between sub and squelch until an entirely unexpected and heavily foregrounded crystal clear hi-hat jumps out of nowhere. Quite a lot of the time I’m put in mind of early Black Dog Productions at their most poignant.

Endearingly, Stewart dodges a big techno climax and brings Reform Club to a close with ‘Quiet Life’, a comparatively short cinematic burst of distant piano, strings and bass. With a title like that and a preference for ambient space and rich melodicism you wander if this might be a manifesto for the future?

I must admit that Claro Intelecto has taken me a little by surprise. I lost interest in “traditional” techno (for want of a better word) many years ago being captivated by junglist overload, dubstep’s broken warrior stance and recently, juke’s unexpected maniacal day-glo explosion. Reform Club’s prime influences may be rooted in techno’s past but what it lacks in formal innovation it more than makes up for with a rich and profound personal expression that will keep you company long after the rest of the world has shut down for the night.