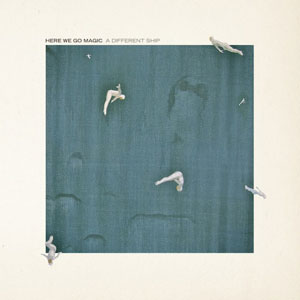 In a Brooklyn beset by blogwave chancers, Here We Go Magic reek of build quality, like a mahogany nightstand or Ben Affleck’s chin. Produced on tape by Radiohead producer and long-time fan Nigel Godrich, who describes the guitar four-piece as “very powerful and very unusual” the New Yorkers, helmed by former folkie Luke Temple, are a real musician’s band. Building intricate grooves with un-showy grace; guitar and back-line work in concert towards an ecstatic blur of helium-light kindness. If slow-dawning inspiration had a sound, HWGM’s ethereal hum would be it.

But beneath the snazzy duds is an equally sophisticated emotional intelligence. Which, like the guitar-work, is both deftly rendered and very powerful. The emotion is disappointment, but specifically the kind that shy folk like Temple feel towards themselves for never having the nerve to really let go. The plan is to put this to rights, with music of subtle, but formidable ebullience. But ultimately, and somewhat tragically, Temple is foiled by his true nature, as a timid soul. From inauspicious beginnings, Here We Go Magic have performed a quantum leap on this, their third album. An unobtrusively profound statement, cradled in soft-focus melancholy, it’s a willowy but towering expression of disassociation, and deeply moving. The sum of Arthur Russell, Big Star and The Beach Boys’ ‘In My Room’.

Two years in the making, A Different Ship plays like a concept album centred around John Martyn’s description of Nick Drake as “solid air”. Their jams – welcoming, seldom fussy and rarely laboured – glide translucently, as if made entirely of wind and light, like a Jane Campion film about alienation in autumnal New York. The groove that emerges on ‘Hard To Be Close’ doesn’t so much build as condense. Along a gentle gradient, ribbon-y synthlines and dancing guitars take the song from a whisper to the politest possible note of dissent, finishing in an understated cacophony. It’s the type of fluid craftsmanship Wild Beasts would sell their Sloan harem for.

The tropical ‘I Believe In Action’ recalls Yeasayer – if the fellow Brooklynites favoured Rumours over Remain In Light. Combining kinetic but sturdy funk with crystalline textures, at its summit it induces lightheadedness: an aural Nitrous rush. Even the shronk-y ‘Make Up Your Mind’ seems gravity-defying, like Beefheart aping Canned Heat’s ‘On The Road Again’. The country-gaze ‘Miracle Of Mary’ and the Deerhunter-indebted ‘Over The Ocean’ slow the pace to a contemplative shimmer, followed by show-stopper, and contender for indie track of the year, ‘How Do I Know’. Surging on a quasi-Motorik beat, a coalescence of instrumentation captures Temple in his liberation, as he dances his anxieties into dust. Cherubic choirs swoon while the track rises in a cloud of goodwill and hope, until, like the slack on chains snapping tight, it expires in a shower of synthy spangles. ‘Bittersweet’ is a hard thing to pull off. But it’s harder still to make utterly life-affirming.

A big supporter of Here We Go Magic, Thom Yorke once sang, at once wishfully and fearfully: “Can’t help the feeling / that if I close my eyes I could blow through the ceiling.” It epitomises the conundrum at the heart of A Different Ship: the choice between fighting the creeping state of unreality which isolation engenders, or surrendering blissfully to an oblivion: a life within yourself.

A Different Ship speaks volumes about what it is to be an artist, which, with a natural aversion to human connection comes the sensation of fading into non-existence. “It’s hard, sometimes to be close” muses Temple on ‘Hard To Be Close’. But “What if I dream?” he contemplates, the line delivered with a suicidal resignation, over the sweetest vapours. Through A Different Ship‘s perpetual weightlessness, it depicts a kind of levitating happiness, and that same state of mind as a perilous struggle to keep your feet on the ground, as a lonely dreamer: an “unresolved tension between valuing being alone and valuing being connected” as Temples puts it.

But in the end he fights the dream that closes in around him. The titular ‘ship’ is the other life he might have lived, adrift in a sea of imagination, had he not decided that “I believe in action”, because “nobody wants to be left alone”. The denouement to ‘Hard To be Close”s central question of “What if I dream?”, Temple asks “What if I do? What if I call for you?”. He chooses the external life.

On the closing title-track, in a final twist Temple laments his decision, over nearly nine minutes of gorgeous, sighing remorse, like he’s watching as the ship disappears into the horizon. To call it poignant is an understatement worthy of the man himself.