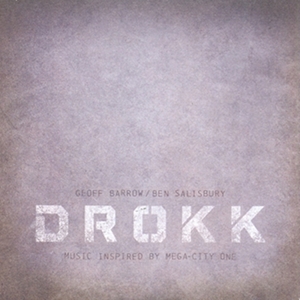 Geoff Barrow has been working through his musical bucket list at a furious pace. The Portishead producer has barely unveiled his collaboration-heavy hip-hop project for Stones Throw, Quakers (not to mention a new album with BEAK>), and he’s already bombarding us from the opposite end of the musical spectrum. This time he’s partnered with film composer Ben Salisbury under the name DROKK, with the self-imposed task of producing an imaginary soundtrack to Mega-City One, the location of 2000 AD strip Judge Dredd.

For those readers who didn’t spend childhood with their nose buried in comics, Dredd is a futuristic lawman who deals out instant justice, while Mega-City One is a bloated metropolis on the East coast of a post-apocalyptic USA. Despite the transatlantic setting, Dredd remains a peculiarly British creation and it’s fitting that he should have been an inspiration for Barrow, a man who co-opted the quintessentially American art form of hip hop into its moody British sibling, trip-hop.

The album itself is a collection of sprawling synthscapes that unnervingly conjure up Mega-City One’s bleak depiction of the future. Oscillating openers ‘Lawmaster Pursuit’ and ‘Helmet Theme’ bring to mind another sci-fi soundtrack, Daft Punk’s unfairly-maligned Tron: Legacy. But rather than indulging in Daft Punk’s neon thrills, this is dark and foreboding, a John Carpenter reel where Snake Plissken never escapes from New York.

There’s a sense that the project is a love letter to the pioneering synth soundtracks of John Harrison and Giorgio Moroder, composers in whose hands machines were capable of conveying heightened emotion. Barrow and Salisbury’s weapon of choice is the Oberheim 2 Voice synthesizer, its distinctive drone dominating the album. ‘Puerto Luminae’ and ‘Eagle’ are master classes in manipulating a single sound to create an atmosphere so intense it’s almost tangible, while ‘2T(fru)T’ is the sound of circuit boards slowly atrophying over a century of neglect. When other musical elements do appear, such as the distorted instrumentation on ‘Exhale’ and the krautrock rhythms on ‘Inhale’, it only serves to emphasise the restricted musical palette across the rest of the album. It all makes for an immersive, if occasionally challenging, listening experience.

In its moments of smothering intensity and eighties retro-futurism, Music Inspired by Mega-City One brings to mind White Car’s Everyday Grace, another album that revelled in its fetishism for analogue equipment while remaining strangely addictive. While Barrow and Salisbury have painted a forbidding picture of the overall future, their own futures as producers with an ever-expanding, consistent repertoire looks assured.