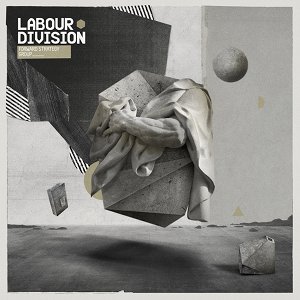 We’ve been here before, haven’t we? The techno album, in this day and age; at worst a collection of anonymous floor tools, great in the thick of a set but utterly pointless for home listening, or at best an attempt at a “journey” that mirrors the current trend – even amongst the best techno DJs – to overfill the already glutted podcast market with “ambient start – minimal openers – heavier middle – banging end” mixes. It’s easy to be cynical about any attempt to take a music that still is at its best at 4am in a dark basement and transpose it to a more sedate setting; and easy to take umbrage with a desire to add “artistry” to a genre that often eschews it.

This isn’t quite what you might expect, however. Forward Strategy Group come mired in contradiction; that name, redolent of an ’80s German Industrial group at first until you realise its origin in Armando Ianucci’s political comedy The Thick Of It, or the backgrounds of its two members, who have pasts rooted not just in steely metallic hammer work but also roots-tinged dub experiments and nosebleed hardcore. These disparate interests have been brought together into an album that actually feels like an album, rather than an extended DJ set or set of DJ tools. No coincidence, then, that Perc Trax are the label behind the release: Perc’s own Wicker and Steel album from last year also dropped the smooth “journey” for something rougher, more crafted, and more personal sounding.

The cognitive dissonance starts right away with Labour Divison‘s opener ‘Ident’. With Forward Strategy Group’s output so far comprising four EPs of straight down the line looped minimalism, and where a tuned tom sound is the nearest thing to a melody available, there’s something immediately arresting about the line noise of a bass guitar thrumming out a bassline straight from the early ’80s. Sure, techno references post-punk all the time these days – but usually with an eye to Throbbing Gristle or 4AD rather than the plangent synth lines of Joy Division. There’s something especially redolent of Martin Hannet in the hidden samples of what sounds like radio voices far off in the background, and the way the synth line spirals up over the insistent bass washed in ever increasing, cascading delay. ‘Ident’ is no mere sop to those who expect more than drum tracks from a long-form release though – closer ‘Cultivar’ acts as a dark reflection of the melancholic, nostalgia tinged opener, replacing the synths for a reverberating, detuned riff and rattling, stentorian drums. And beatless tracks may be common currency for more left-of-centre techno artists, but often relegated to “interlude” status – ‘Fading Centres’, occupying the centre of the tracklisting, roots itself around a beautiful gaseous drone punctuated by rattling, shifting field recordings, and provides much more satisfaction than a hundred tired industrial knock offs.

This is of course isn’t to suggest that the album eschews the sounds that made FSG’s name. ‘Mandate”s drum machines sound like a Soviet take on british synth-pop – kick-snare syncopation and fills work around delayed bass stabs to motorik effect, whilst the title track and ‘Metal Image’ take more conventional techno tropes and twist them slightly, removing the linearity and adding structures that encourage the listener to reach into the depths. The two most interesting tracks, however, again move away from the expected and draw inspiration from elsewhere. ‘TTH’ may be based around metallic drones, but they form a melodic bedrock that coupled with the shifting beat and white noise gasps refer as much to darker ’90s IDM sounds as they do current techno; and on ‘Industry & Empire’, a slow, dolorous, heavy bass drum toils away in the middle distance, almost obscured by the environmental sounds, reverb and uneasy tappings and whirrings that rise up in the ear – the whole suggesting Prurient’s Hospital Productions label as much as anything else. There’s only one real concession to the heavyweight peak time sounds that featured on FSG’s Perc Trax 12″s; and even then ‘Elegant Mistakes’ has a broken, disjointed rhythm to it of the kind favoured in Surgeon DJ sets, the distorted drums mirroring the patterns of UK hardcore breakbeats without necessarily sounding like them, and the whole track in exercise in tension with the expected four-square kick always nearly there, below the surface, but never quite in focus.

This is a deeply assured, personal album from a group already demonstrating their mastery of nuance, balance and – yes – a big heavy beat smacking you squarely around the head. If this is what they’re pulling out of the bag for their debut, it’s fascinating to think how their sound could develop over their next releases; and, in the process, pull some of techno’s more lacklustre producers into a more creative, personal mindset.