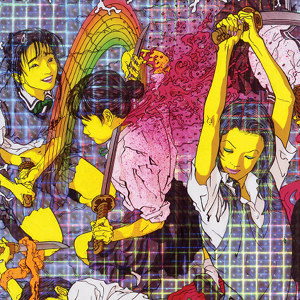 After a period of instrumental focus, Laurel Halo’s new album Quarantine reintroduces lyrical content within a current-driven set of electronic songs and instrumentals as a somewhat surprising addition to Hyperdub’s roster.

As heard prominently in Hour Logic, a defining strength of Halo is her ability to create and cleverly direct the flow of fluid structures.  The instrumentation of Quarantine is familiar for her style, primarily subtle step arpeggiations of analogue synths, textural drones and harmonic compliments filtered in layers, plus the occasional, sparingly used thread of percussion. Quarantine works with a certain pool of timbres to create a consistency throughout the record, an abstract concept of sorts. This concept appears to be a combination of transit, travel and movement paired with loneliness and the wistful, slightly resentful guidance that can come with caring after heartbreak.

‘Airsick’ opens the record and introduces these themes, building upon a muted pad very similar to the drone of a plane cabin in flight – a sonic blueprint that remains throughout the record. In ‘travelling heart, don’t go away’ Halo’s lyrics confirm a sense of reticent longing, her voice regularly dipping into a slowly swirling background. The vocal melody is beautifully angular and intriguing.

Having stated clearly that people who enjoy ‘fake’ vocals should steer clear of Quarantine, Halo has purposefully shunned corrective production treatments for her voice. ‘Years’ is particularly naked in this respect, an apt choice for the almost petulant frustration being conveyed. Overlapping dubs of its four key lines ‘I will never see you again’, ‘you’re mad ‘cause I will not leave you alone’, ‘making eye contact’ and ‘many years before’ occur at different registers in her voice, a twinkling, rising harmony and single buzzing drone anchoring the whole song. The result is quite classical, a selection of phrases repeated in an interlocking fashion like the choral part of an oratorio.

‘Thaw’ gives further examples of Halo’s unusual vocal prowess, from winding melodies to mid-90s grunge intonation, as she inquires earnestly about mundane topics (‘Did you go into town? Was it busy, was it crowded?’) before twisting them into something unsettling and emotional. Elsewhere, album finale ‘Light + Space’ has a pop-like chorus solid enough to allow the verses to be shaped less regularly by her lyrics and syllables, and ‘Wow’, built entirely upon swells and glissandi of a single, baby-like vowel through a harmonizer, is like a strangely infantile version of one of her full tracks.

The drastically squeezed and digitally manipulated falsetto of ‘Carcass’, however, is even more fascinating for its unfamiliarity. These kinds of unexpected elements make the album particularly engaging: ‘Joy’ melts down to its core half way through, just to swell back to life; ‘Nerve’s ultra-slow heart rate beeps and kick begin to suggest a pulse before changing direction, a dreamy journey suggesting both the supersonic and the static; ‘Holoday’ injects double time dance fragments around pitch-shifted choral layers of Halo’s voice, its panning slowly whipping the effect into a soft turbulence; ‘Morcom’ reflects with an almost passive sadness upon a letter received, the music beneath a collection of fidgeting, spasming textures around soft piano chords.

With such a mixture of idiosyncratic elements some may find Quarantine difficult to fully enjoy throughout, and it is natural that there will be some material that doesn’t gel quite as well. The long vocal melodies and metaphorical lyrics of ‘MK Ultra’ and ‘Tumor’ stumble slightly as a slightly obtuse pairing, but these are really the only parts that suffer throughout the record.

Quarantine is therefore a refreshingly original experience, and a real coup for Hyperdub, linking back (whether intentionally or not) to Kode9 and The Space Ape’s hypnotic, floating ‘Promises’ from Black Sun – arguably its strongest and most interesting track. With this record Laurel Halo has created a strong work that, while being notable and challenging for its unusual, compact combination of pop, ambience and musique concrète, is also immersive and enjoyable for this exact reason.