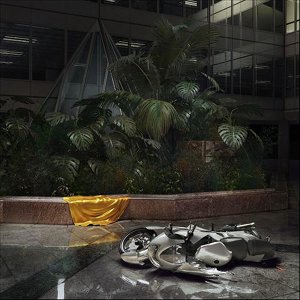 In a recent interview with Little White Earbuds, despite only being offered some half-baked email questions, Night Slugs label owner Bok Bok made some interesting points about artwork and music. Night Slugs has been renowned for its artwork since the start: its record sleeves are usually images of isolated buildings or locations – “monolithic structures in a world of digital beams and lights”, as Bok Bok has put it in the past – tied in to some form of operation, which only serves to increase that feeling of isolation. So you have the pyramid of Egyptrixx’s Only Way Up, the water towers of Jam City’s Magic Drops, the space station of Girl Unit’s IRL, the dam of Lil Silva’s Night Skanker, the underground water chamber of Jam City’s Waterworx, and so forth. What I find interesting about Bok Bok’s interview with LWE, however, is the way he talks about creating “atmospheres that haunt the tracks”, or “settings for [them] to take place in and play out in a certain environment.”

It goes a long way. It’s often, in fact, hard to disassociate Night Slugs’ music from the visual material associated with it, and that’s why the label will always be streets ahead of the hordes of white label techno currently doing the rounds. The popular misconception amongst techno producers right now is that releasing music on a hand-stamped white label is somehow taking the form back to basics; the essence; letting the music speak for itself. Now there’ll always be a place for white label culture (look at its role in grime and UK Funky), but its current position at the height of techno fashion seems to miss the point – the best techno has always been synonymous with imagery, whether that’s red planets and wild visions of the future (Detroit), back alleys and local pornographers (Birmingham), or even, to take a recent example, the evocative Victorian imagery of Andrew Weatherall’s Bird Scarer label. Even something as simple as naming a series of singles after girls (Thomas Brinkmann’s late ’90s run) can elevate instrumental loops to something memorable and iconic. Let’s face it, when you’re making instrumental club music, imagery and track titles is such a simple way of imbuing it with some personality that churning out untitled, white label singles just seems second rate in comparison.

Which leads us to Classical Curves. Even before listening to Jam City’s debut album, it’s obvious that he’s got a remarkably pronounced vision of what visuals the record should provoke, as well as how it should sound. Everything from its artwork, to the series of accompanying YouTube videos, to the press release and the backstory that he’s cultivated in interviews, adds up to one of the year’s most stimulating records. Jam City’s talked in the past about thinking of music “in term of shape”, inspired by grime and minimalism (“when I make stuff it’s less architectural and more sculptural, because it’s about starting with a block and chipping away at it to create definition”), and on tracks like ‘How we Relate to the Body’ you almost feel this happening in real time: a synth riff, crowd noises and drums slowly gaining in resonance and tonality over five minutes, while piano and vocoded voice are added to create the feeling of a huge dome being erected around you. It’s like hearing Sim City played through music: grid-based construction occurring at a robotic pace, but with subtle curves and twists of individuality that make it personal.

Often, Classical Curves‘ tracks seem so natural in their build that they feel like one take numbers. Obviously they’re not, and are presumably sequenced on a computer, but the way ‘Her’ and ‘The Courts’ – which spring so perfectly into one other that they might as well be one track – build up drum machine rolls and touches of Jam City’s obvious musical influences (the camera clicks are presumably a nod to Roll Deep producer Danny Weed’s signature, the cold square wave that melts into the breakdown of ‘The Courts’ is Wiley-esque, and the girder-weight snares recall the signature ballroom clash, sampled from Masters at Works’ ‘Ha Dance’) sounds like the result of instinct. I’m sure there’s been plenty of pre-planning and tinkering there, but you wouldn’t know it to listen to it. Classical Curves might have a multi-faceted visual side, but unlike say, Vatican Shadow, you never get the impression that the music is playing second fiddle; rather, both the music and imagery are being sculpted in tandem. It sounds simple, I’m aware, but as with much red planet techno, Classical Curves really does achieve a rare balance between the two.

Both Classical Curves and Girl Unit’s recent Club Rez feel like they could mark the start of a new stage for Night Slugs. Not only are they among the best records that the label’s put out in its short but impressive history, but in a similar fashion to the way that their artwork marks something new (both are 3D, whereas past Night Slugs releases were mostly drawn on an isometric grid), they seem to use rhythm as a foundation for flowering sound sculptures, and in the case of much of Classical Curves, and Club Rez tracks like ‘Ensemble (Club Mix)’ and ‘Club Rez’, the results are more awe-inspiring than they are feet-provoking. This is, to some extent, a generalisation, but if you look at many past Night Slugs releases (‘Square One’, That Mystic, ‘IRL’, ‘Night Skanker’), although they were visually evocative, rhythm seemed their priority. Perhaps with the label’s decision to form Club Constructions, a seperate release schedule for straight-up club music, we’ll see the label’s main series of releases move closer to the sculptural approach exhibited here, and away from the sharp, 90 degree angles that work so well in a club. Or maybe we won’t. It’s just one of many questions provoked by Classical Curves, one of 2012’s best and most provocative albums. Where is that phone, anyway (pick it up)?