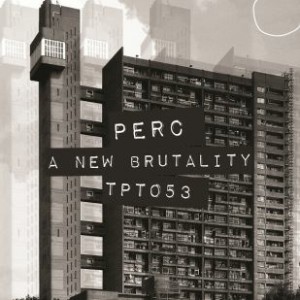 Intriguingly, Perc’s route to A New Brutality appears to be through an old one. The cover of his latest EP gives pride of place to a brooding concrete tower block of the kind seen all over London’s less privileged boroughs. Brutalism tends to get a bad rap: its forbidding structures are often cast as the folly of a generation too in thrall to its utopian ideals to notice the totalitarian flavour of their execution. Ali Wells, though, doesn’t seem interested in summoning a bogeyman – quite the opposite, in fact. Last year’s Wicker & Steel LP felt like a concerted attempt to reflect the bleakness of our times, and alienation, anomie and financial hardship are similarly implied themes here (‘Cash 4 Gold’ is the giveaway). It’s easy to forget that brutality – as a practice or as an aesthetic – can be the route to revolution as well as an expression of reactionary bitterness.

This EP, quality-wise, is that rare thing: back-loaded. The titular opener takes the baton from ‘Jmurph’, Wicker & Steel’s closing barrage, and runs further into the shrieking void. It’s techno let loose from constraint: a pummelling, relentlessly stilted barrage of kickdrums almost overpowered by the piercing howls of white noise playing across its surface, hi-hats ticking along mechanistically in the background. A ballsy exercise, but one that’s not particularly pleasant on the ear or the body (that said, I’m sure pleasantness wasn’t Wells’ goal).

‘Cash 4 Gold’ and ‘Boy’ both trade in loping grid-patterns reminiscent of a Teutonic operator like Mike Dehnert: almost swung, almost polyrhythmic, settling in a liminal space between serpentine deviance and martial precision. What’s striking is the subtlety of execution: the former never strays far from its original material, but a plaintive melody is gradually bled into the mix – first furtively peeking out here and there, then unwinding in all its unsettling glory. The latter, much like Dead Sound & Videohead’s EP on Wells’ Perc Trax label earlier this year, bulks itself up with antagonistic blasts of noise – presumably aiming for fury but somehow, brilliantly, picking up a flamboyant swagger along the way. By this point in the EP slightly mismanaged aggression has given way to savage control: the breakdown slides cooly from regimented pulse into full-on noise terror, before snapping back onto the dancefloor with practiced ease.

The faded, pianistic grandeur of Caretaker-esque closer ‘Before I Go’ gives weight to the sense that Wells’ musical palette is widening at a rare pace. Still, wrapping things up on such a mournful note leaves us with a question: whence a New Brutality? These days, is the old one just a mossy ruin, something to be venerated occasionally but ultimately left suffocating under layers of dust and neglect? Or could the echoes of a discarded optimism be transformed into something new, something vital – something concrete?