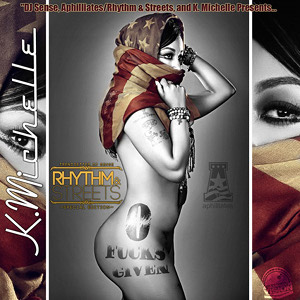 Back in 2010, K. Michelle looked a likely candidate to be the next R&B breakout star: a passionate-voiced R. Kelly protégée who took the raw confessionalism of prime Mary J. Blige and ramped up the brittle, elbow-throwing aggression to thrilling levels. Her What’s The 901? mixtape was an instant classic: whether essaying mournful, deeply moving balladry, tearing through club joints packed with fighting talk or seizing the hits of the day and making them her own, K. Michelle proved herself a compelling force of nature.

Two years on, K. Michelle’s record deal is no longer – according to her, she fought to terminate it due to Jive’s refusal to promote her adequately. Instead, she’s embarked on the perilous route of reality TV – Love & Hip-Hop: Atlanta, to be precise – to get her career started. It’s hardly the sign of a career heading in the right direction – and her latest defiant mixtape reflects the uncertainty of where she’s at. From her naked pose on its cover to the up-middle-finger she gives to her former label – and many others – on its very first track, she seems to go out of her way to prove its title right.

K. Michelle’s voice is still in fine fettle, even if it neither needs nor suits the occasional autotune slather – but one of the fucks she doesn’t give is clearly about mixtape flow or coherency. 0 Fucks Given is a patchy, unfocused mess whose variable quality doesn’t exactly merit its 24-track length. In contrast to the impeccable songcraft she’s displayed in the past – most recently on the leaked cut ‘For My Cinderellas’ at the end of 2011 – she spends much of 0 Fucks Given attempting to use her vocal skills to disguise her aimless casting around for a tune or hook. One has to wonder whether, despite the proliferation of current or former mainstream R&B artists opting for the DIY route, an artist like K. Michelle – who was always of a more classicist bent than, say, Miguel or Dawn Richard – wasn’t better suited to a major label environment that would have given some structure to her rawness.

Still, a talent as formidable as K. Michelle’s can’t be hidden completely, even if she seems to have little idea what to do with it right now (to the extent that the mixtape’s numerous references to her love of Jack Daniels give the listener cause to genuinely worry for her by the end). The delicate backing vocals and pretty melody of ‘Ghost’ enable its epic power-ballad core to sneak up on you; ‘Irrelevant’ finds K. Michelle channeling the lush clarity of Teedra Moses; and on ‘Go Off’, she reiterates her defiance over an ominous bass hum: “Yeah, I might be crazy but I’m talented as fuck / and all I wanna do is drink this Jack in my cup,” she declares with the perfect mixture of haughtiness and ratchetness. Who knows what comes next for K. Michelle – but despite itself, 0 Fucks Given still displays the reasons not to give up hope for her just yet.