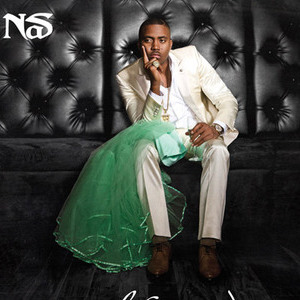 Is Nas having a mid-life crisis? The title sounds a faint alarm of possibly-forced equanimity, particularly when repeated so often – as a stand-alone hook, within lyrics – over the course of his tenth album, as though he’s trying to convince himself of its truth. This is coupled to an unexpectedly personal slant to the music – Nas appears on its cover with ex-wife Kelis’s wedding dress over his knee, and he returns to the subject of their marriage with the conflicted feelings, insistence of no regrets and repeated nature of a man who isn’t quite over it yet, whether making self-consciously magnanimous gestures (‘No Introduction’) or alternating between bitterness and tenderness (‘Bye Baby’).

As is par for the course, dissecting dead relationships inevitably leads into uncomfortable self-analysis. Life Is Good finds Nas divided between mythologising his past, creating beautiful, nostalgic monuments to the days when he was in his prime, and uncertainly casting around the present to find his appropriate place in it. The former makes for the best cuts here: the no-nonsense boom-bap sparseness of ‘Nasty’ and ‘The Don’ finds Nas painstakingly and convincingly recreating the furious hunger that marked his younger self out; the gospel chorales and quicksilver organ riffs that underpin the Illmatic-referencing ‘Accident Murderers’ lend it a certain grandeur even before its ominous breakdown. ‘A Queens Story’ is a particular highlight: ushered in by self-important fanfares before giving way to breakbeats that will hit the spot for any ’90s rap fan, the way in which its swooping strings constantly teeter on the verge of climax before pulling back and panning round is cinematic in the most creative way, the perfect frame for Nas’s evocative flashback crime narrative. In the final verse, the mood abruptly changes as the beat descends into a mournful sample of a Chopin piano étude as Nas reflects on the bittersweet displacement of victory: “Now I’m the only black in the club with rich yuppie kids / Sad thing, this is the top but where the hustlers went?” It’s a theme he returns to on ‘Reach Out’: “When you’re too hood to be in them Hollywood circles / And you’re too rich to be in that hood that birthed you.”

On these tracks, Nas is as impressive as he ever has been post-Illmatic: his lyrics are tight and well-crafted, while the way in which producers Salaam Remi and No ID blend opulent arrangements with retro beats neatly sidesteps the pitfall Nas has so often fallen into of trying to awkwardly straddle contemporary production and the sounds he’s still most comfortable with. But when he exclaims, “This is for my trapped-in-the-’90s niggas” at the close of ‘Loco-Motive’, he unwittingly highlights the central remaining dilemma that prevents him from consistently touching real greatness any more. When he casts Mary J Blige as his diva foil to croon an interpolation of New Edition on ‘Reach Out’, it feels appropriate: Blige, too, is a legend of her genre whose latter-day attempts to recapture her glory days have been directionless, scattershot and all the more disappointing for the occasional flashes of greatness that she can’t help let out. The fact that ‘Reach Out’ – surely deliberately – uses the same Isaac Hayes sample as Blige did on her 1995 classic ‘I Love You’ only brings this home more poignantly.

The self-awareness of this conflict makes Life Is Good a more compelling listen than Nas has delivered in a while. Nas’s determination to open his heart mostly pays off: ‘Daughters’ is a song that’s as likely to make fathers everywhere misty-eyed as it is to make teenage girls cringe in horror, while exhuming the ghost of Amy Winehouse for an ode to unwise love on ‘Cherry Wine’ is supremely bittersweet. But all the sumptuous music in the world can’t disguise the more tired, tedious side of Nas’s inward focus: complaining about not getting enough credit on ‘Back When’ as though he hasn’t been venerated as a hip-hop elder despite failing to make a straight-up classic album since his debut, retreading the gold digger myth to dull effect on ‘Stay’. On that song, he boasts: “Spotlight on me, I still look 20.” It’s a sad thing to hear from the mouth of any middle-aged man.