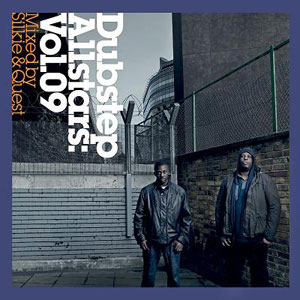 Tempa’s Dubstep Allstars mix series has faltered somewhat in recent years. Between 2004 and 2008 the series could be considered a singular authority on all things dubstep, a vital marker of the scene’s current concerns, the names to watch and the tunes to hunt down. 2009’s Vol. 07 was a valiant attempt to chart the growing schizophrenia of the scene through a split release – Chef on one side, Ramadanman on the other; by 2011 there was an air of resignation in the selection of Distance to curate Vol.08, the producer’s myopic focus serving as a security blanket against the violent convulsions of a sound gone overground.

It’s fair to say that dubstep’s crisis of identity hasn’t exactly been resolved this past year, and against this turbulent backdrop Silkie & Quest are veritable paragons of stability. The pair first emerged midway through the last decade under the aegis of Mala and his Deep Medi label, and were chosen by him to feature on Generation Bass, the 2008 iteration of Mary Anne Hobbs’ now-legendary Dubstep Warz Radio 1 special, alongside the likes of Joker and Oneman. Since then, through Deep Medi and their own imprint Antisocial Entertainment, the duo have plowed a distinct but not overly challenging furrow, honing a sound that’s often as kind on the ears as Silkie’s name would suggest.

Their Allstars mix, then, yields no great surprises – and that’s precisely, one imagines, what Tempa were hoping for. The pool of producers is tightly constrained, with the DJs’ own productions featuring heavily, the tempo is fixed firmly at around 140bpm, and plenty of the standard stylistic boxes are ticked: pedestrian digi-dub laced with rasta samples (Silkie’s ‘Cyberdub’); slightly ham-fisted breakbeat (‘Selva Nova’); and, of course, a sneaky wobbler or two (Mala’s VIP of ‘Eyez’ into Mizz Beats & Jay Retro’s excellent ‘Level O’, which resembles a Get Your Own Back-style deluge of gunge lovingly rendered in 8-bit).

Mostly, though, Vol.09 is an object lesson in the duo’s own distinctive style: dubstep rollers softened with smooth melodics, drawing on a timbral palette sourced from jazz-fusion via New York deep house. At times, it’s a seductive mix: as in Silkie’s collaborations with Von D and Truth respectively, ‘Snowed In’ and ‘Feel’. Too often, though – and particularly towards the end of this hour-long mix – the results feel dogged rather than agile, a steady trudge through familiar terrain. The late appearance of a remix of Katy B’s ‘Witches Brew’ has the potential to spice things up – by this point the duo’s slightly circumspect approach to melody could do with a freshen-up – but Silkie fails to nail a hook, ending up with a sunny but slightly confused mess. It doesn’t help that the pair aren’t massively accomplished DJs: segues are efficient but often brisk, and at points tracks that seem, tentatively, to be stretching their wings – the winding, leisurely chord progression of the latter half of Quest’s ‘Somewhere’, for example – are wrenched out of joint all too soon.

It’s not that this mix is bad per se – more just lacking in unambiguously, irresistibly good moments. Fear not though, for there is a redeeming feature here – and it’s Swindle. The producer’s relative newcomer status is audible in the vitality of his beats, which at points seem like they’re positively spoiling for a belly laugh. The Swindle productions peppered throughout this mix – ‘Belfast’’s plastic-y reese bassline and rambunctious Amen choppage; ‘Do The Jazz’’s surreally aimless lounge melody; the moist, steamy, ever-so-slightly obnoxious vibe of ‘Forest Funk’ – are more often than not the highlights, and serve as a reminder that there are still plenty more avenues left unexplored in the realms of 140.

The mix closes with Quest’s ‘Stand’, whose spoken sample intones authoritatively that “The generation that’s coming up now can see it…and are not afraid to say it”. Maybe it’s telling that Silkie & Quest are still considered part of an emergent generation of dubstep producers, even though many of the genre’s scions have risen to far greater notoriety in a far shorter time frame. Can this pair lay claim to a bold new vision for dubstep, or are they just consolidators, standard bearers for an ossified sound, cheerleaders for their elders? The truth, going on the evidence of this mix, lies somewhere in between the two.