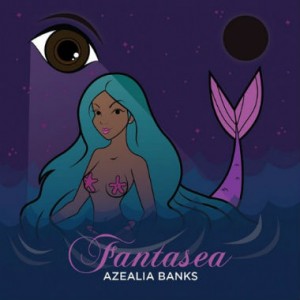 Totaling 19 tracks, a good proportion of them either strong or all-out hot tomales, Fantasea is the grandstanding riposte we’ve been waiting for from Azealia Banks – the somewhat delayed ‘hah!’ to an absurdly premature, net-accelerated backlash. At the same time, however, like Banks’ recent 1991 EP, Fantasea is a largely suggestive album, a mere pointer to the 22 year old’s potential as opposed to an inarguable vindication of Banks as God’s gift to rap. The reason is down to the difference between the full length album and the full length mixtape.

With so many songs (finally) deployed in one big wave, traditionally Fantasea would have been what the pre-internet public used to define a rapper’s ‘aesthetic’. But this is the post-Lil B age of the mixtape, a culture where the sacredness of the album format has been devalued by sheer inflationary volume – no longer a once-in-a-lifetime opportunity for the artist to put a bit of themselves into the world. But by Banks own admittance Fantasea is a testing ground – less an album than a throwaway forum for a series of well executed but relatively desultory experiments, like a pilot episode with which to front as many ideas as possible. Meaning that, as Banks bombs deliriously around Fantasea in search of what she considers the most “progressive” sounds – in turn moody house; industrial-tooled dancehall; the lumpen end of early ’90s rave; AraabMusik’s trance-via-illbient suff; bass music (for want of a better word) in the guise of the guesting Ikonika and Zebra Katz’s austere ‘Ima Read’ – by the end the outcome is yet another femme-rap release that shirks the obligation to offer an auteurist statement, in favour of cherry-picking.

The thing is, a focussed, uncompounded, coherent statement is whats needed from rap in 2012, and what in 2011 Banks promised. We expected more than just a largely unrelated collection of mostly good songs. Nowhere near as disordered as most mainstream major label releases (prime example: Minaj’s bipolar Pink Friday – a first half of Young Money weirdness followed by bible belt tweenpop) nonetheless it’s difficult to reconcile what the Azealia Banks sound actually is. There’s an afro-Carribean tilt, an undertone of gonzo freakiness, a strong dance influence and a bassy kink. But other than that Fantasea is too disparate to pin down. Compare it to Janelle Monae’s The Archandroid, for example, or Katy B’s debut. And say what what you will about the Peaches derivatives like Amanda Blank and Uffie, but at least they had an act. The good news is, Banks proves herself every bit the hell-raising maverick of ‘212’. She’s an incorrigible bad girl, laughing at your expense. But having attitude isn’t the same as having an identity. The recent Nas release has emerged as a timely record – a throwback to the days when rapper’s personality were converted verbatim into distinctive, not to mention enduring albums that felt, from top to toe, like acts of self-expression.

All you can do is enjoy the empty excellence on display throughout an undeniably consistent compendium of leftfield club tunes. Particularly fresh-sounding, in a back-to-front way, are the retro-rave tracks (as per 1991‘s ‘Liquorice’) – apparently an exotic sample source in 2012 amongst forward-facing rappers. After opening the album by rhyming over The Prodigy’s ‘Out Of Space,’ the title track sees Banks firing hot over breakbeat house – all coke-wired piano lines and flurrying chipmunk samples. Sporting the AraabMuzik intro ident, ‘Salut’ meanwhile is powered by gabba synths. It’s fitting that, while her pop brethren plump for Balearic pop and third-rate electrotech, Banks should gets a kick from the punk abrasiveness and plain futuristic strangeness sown into the delinquent strains of ‘ardcore. Equally impish sounding is the low-slung house on double highlight ‘Fierce’ and ‘Chips’; the former made especially establishment-baiting by the appearance of the flamboyant Zebra Katz, talking New York ballroom parties and “munching trade for dollars” over Drums of Death’s rumbling production. When Banks finally does cede to the mandatory electro track, with ‘Luxury’, those farty synths are deep and stern as opposed to trite and melodic. And so perfect is her rapping against the electro sound you wonder why it’s a rare combination charts-wise, while her vocal performance is Fantasea’s finest: ragga but silken and dexterous.

Not quite as memorable are the vaguely pedestrian Jamaica-pop tracks. Though modishly synthetic the Ikonika-produced ‘Neptunes’ (featuring London girl-MC Shystie) is blandly earthy, and inspires an incongruously worthy, nicey-nicey rap turn from Banks, as if she’s wary of disrespecting her sister heroine producer. ‘Atlantis’ is equally vanilla (save the dark middle section), while the drumline-powered, Diplo produced ‘Fuck Up The Fun’ is serviceable but predictable (change the record, Diplo). As is ‘L8R’, a slight rap’n’snare doddler. ‘Aquababe’ and ‘Jumanji’ see an improvement. The previously released former, produced by Banks’ sparring partner Machinedrum, plays like a bizarro-world ‘Drop It Like Its Hot’. Its surrealism implies that mid noughties Dirty South is still influencing hip hop (Ludacris’ ‘Stand Up’ is starting to look like a master text). Restless with weirdo samples (gurgling babies, howling wolves) and touches of rave synths and parping percussion, its fantastical nature contrasts sharply with Santigold’s approach to the same style. That in a certain respect fellow Brooklynite Santigold was a proto-Banks, is telling. Times are changing and Banks is at the cusp. Refreshingly, without a 303 in sight.

More deft than Minaj and plying more colourful rhyme schemes than logical nemesis Angel Haze, if little else Fantasea confirms that the woman can rap. Though aside from the phonetic pyrotechnics (see ‘Runnin’ for audacious speed) it’s her ability to effortlessly adapt her flow, innumerable times, in conjunction with a veritable multitude of different genres, that marks Banks out as the ‘God’s gift’ type. But then, we already knew she could rap. What we still don’t know, however, is the real Azealia. The lingering feeling is that scheduled for October, the debut proper will be the definitive Banks unveiling.