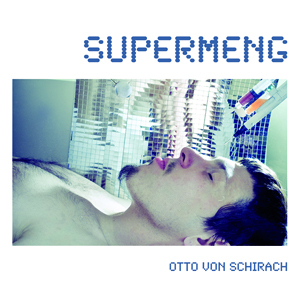 Every now and then, electronic music throws up a singular character whose presence is both fascinating and infuriating in equal measure. Otto Von Schirach is just such a character. The Miami native first surfaced with releases on IDM imprint Schematic in the early 2000s; subsequent fleeting associations with the likes of Cock Rock Disco confirmed his position in the breakcore hall of fame, but his music has never really adhered to that tag – or any tag for that matter, defined as it is by glitzy(-ish) live shows featuring multiple costume changes (and the odd bit of cross-dressing), a stylistic palette that ranges from hip-grinding Miami bass to shrieking speedcore, and a recurrent preoccupation with pulpy sci-fi and horror themes.

After an absence of three years, Schirach has returned – if not renewed, then certainly refreshed – with a new album, Supermeng. The involvement of Modeselektor’s Monkeytown label is telling: as masters of the art of crossover themselves, the Berlin duo have an uncanny knack for coaxing out the more accessible (some might say less adventurous) face of the underground artists they champion – and this album certainly sees Schirach on unprecedentedly rounded, polished and neatly packaged form, for better or for worse.

Make no mistake, though: that still makes this easily the most unhinged thing to appear on the label to date, and likely an unpalatable proposition for audiences expecting serious-business house and techno hybrids. Supermeng works through a number of reference points that have been drawn into Schirach’s bizarre orbit over the years – vintage Miami bass, churning new-school dubstep and the occasional blast of excoriating noise; perhaps less predictably, spindly, synthetic takes on garage rock and psychobilly – all with tongue planted firmly in cheek. The lyrical themes will also be familiar to fans: a quixotic B-movie mulch of alien invaders, zombie attacks and David Icke-esque cosmic-lizard conspiracies, rendered in melodramatic tones by a vocalist who has always been more willing to embrace the high-posturing of camp than many of his contemporaries.

It’s a heady mix, and – as with any exercise in eclecticism – runs the risk of descending into a lumpen, disjointed mess. Trying to explain his erratic tastes in a 2004 interview, Schirach stated that “I like the way things sound when they’re all torn apart”, and this is the essence of a certain IDM aesthetic in a nutshell – one which Schirach excels in. ‘Intelligence’ becomes code for the capacity to deconstruct: to display an awareness of form through a practice which borders on pastiche, but revels in tearing those forms to shreds, inducing an effect somewhere between humour and savagery.

The results can be compellingly strange – as in opener ‘Salpica’, a relatively straightforward (by Schirach’s standards) Miami bass banger disrupted by curious chipmunk-vocal interludes and tortuous edits. They can also be spectacularly fun: the one-two suckerpunch of ‘When Dinosaurs Rule The Earth’ and ‘Gravitron’ sees Schirach doing unspeakable things to the tired Moombahton template – not a shockingly new strategy, granted, but one which doubtless works wonders on the dancefloor after a fistful of class As.

At points, however, Schirach’s stylised poses can come across as arch – as in the title track, which seems to uphold Miami bass as a naive, antiquated form, a quaint caricature to be knowingly acted out. Even beyond the missteps, though, there’s a nagging sense that Schirach’s whole aesthetic is built on a creaky old ideology – faster, harder, more fucked-up – that has largely lost its lustre in 2012; or rather has been subsumed into the mainstream by Skrillex et al, leaving its progenitors with a choice: to either tolerate their position as miniscule fish in the enormous pond, or seek pastures new. Yes, there are moments of fist-pumping excellence here – as in the clownish digi-blastbeat onslaught of closer ‘Reptile Brain Wash’ – but they still feel slightly out of step with their surroundings: either an ill-conceived stab at the EDM big time, or a relic dredged up from some mid-2000s swamp.

Of course, it’d be ridiculous to expect an artist like Schirach to capitulate to some zeitgeist or other in pursuit of critical “relevance”. But if an artist is going to be as stubbornly, idiosyncratically self-absorbed as Schirach is, one can’t help but feel they’d do better out in the wilderness: uncontrolled and uncontrollable, a perplexing, singular figure who straddles the boundaries of the marketable and the incomprehensible – in other words, a loud voice on the lunatic fringes rather than a somewhat muted one in the thick of it all. Supermeng is a refinement of Shirach’s sound, exhibiting what you might call a newfound maturity. But when being puerile and provocative is your schtick, that’s not necessarily a good thing.